One of the most important things for a Warframe to have are its weapons, without these it is impossible to face the challenges that lie ahead. Each weapon has its own unique style, mechanic and usage. Some may appear similar at times but each weapon has its own advantages and disadvantages depending on what the user is comfortable with.

Available to the usage of the users, there are 3 types of weapons that can be used and one of each can be equipped at a time on a Warframe. Users may switch between the weapons as they please and when they see fit.

The types of weapons are:

These weapons are that provide the primary source of damage the Warframe does to enemies throughout missions. Most of them are 2 handed firearms that may either fire projectiles, bullets and more. Most of the primary weapons consist of rifles, shotguns, automatic firearms, bows and crossbows and more.

These include firearms that are compact and may serve as backup weapons or another source of damage if strategized by the user. Most of them are one handed firearms while a few are dual wielded. These weapons consist of pistols, machine pistols, one handed special firearms, thrown weapons and more.

These are a favorite of the Tenno, or Warframe users as they can somewhat be deemed as a signature weapon of theirs. Melee weapons are used in close quarters combat and fighting enemies up close. They are a good substitute for when low on ammo or when enemies get too near. These consist of swords, spears, hammers, whips, knives and many more.

Weapons alone are the tools of the Tenno and their Warframes, however to unlock their full potential they must be configured using modules, also known as mods. These provide bonus stats the weapons such as increased damage, elemental damage, critical and status chance, and many other special stats that can tune the weapon to their advantage. 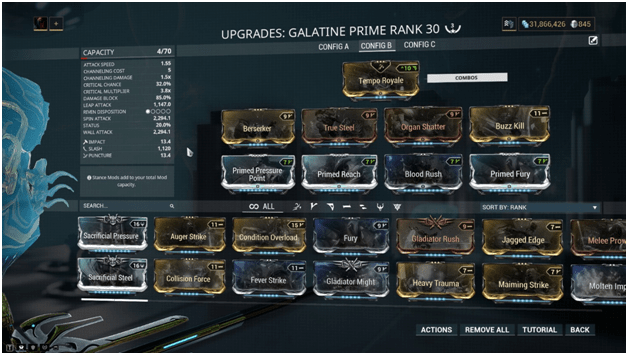 Each weapon type has its own set of mods which the user may choose out in order to make weapon builds that shift the tides of battle to their advantage based on their ideals, strategy and comfortability with the weapons and mods they select.