Focus is used to increase points in a certain school. There are 5 schools to choose from including Madurai, Naramon, Zenurik, Vazarin and Unairu. Each of the schools has their own abilities that can boost either the Warframe or the Operator. 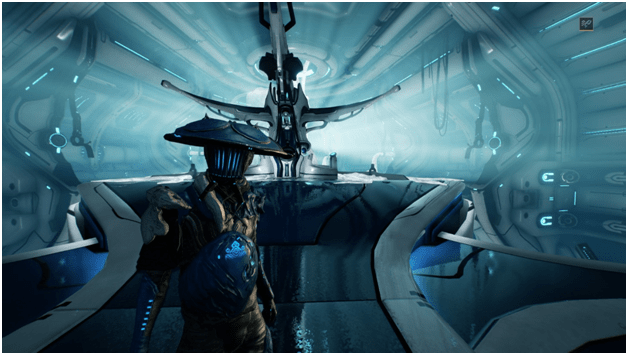 There are 5 different schools that the players may choose from and may equip one at a time, each with their own unique passives/abilities. These may be unlocked by spending focus on them and later on activated. Each school has their own attributes and depending on the gameplay of the user and the Warframe they plan to use; they can be used to overcome even the hardest of situations. 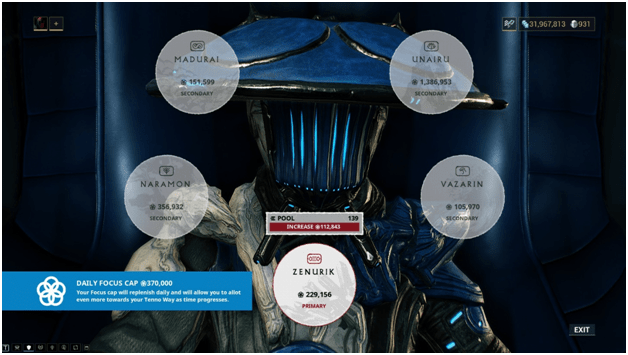 You start with one school at first but later on you may unlock the others and eventually acquire abilities from each and become even stronger. Choosing the proper school that suits your main type of gameplay is important as farming is necessary for unlocking the others.

This school focuses on offense, damage and power. Those guided by this school are powerful fighters and prefer attacking to most. 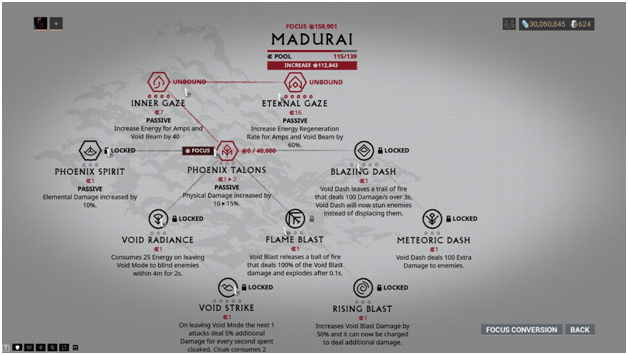 A school focused on healing, rejuvenation and protection. Those guided by this school are protective healers and great at supporting their allies. 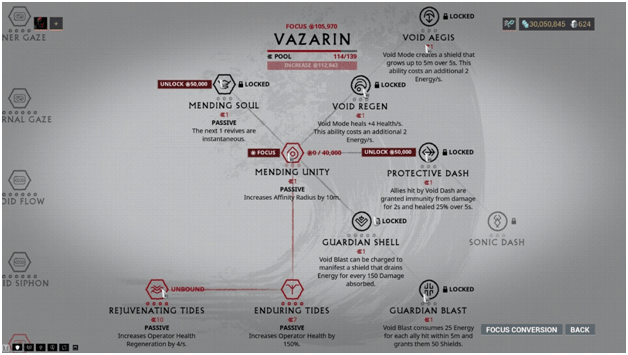 A school focused on strategy, tactics and brute force. Those guided by this school excel in melee combat. 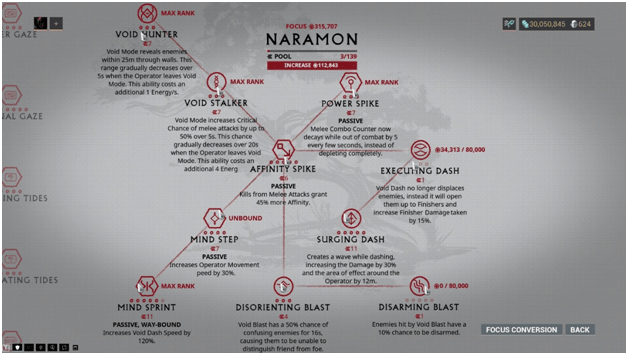 A school focused on tenacity, defense and iron will, those guided by this school are able to endure any battle. 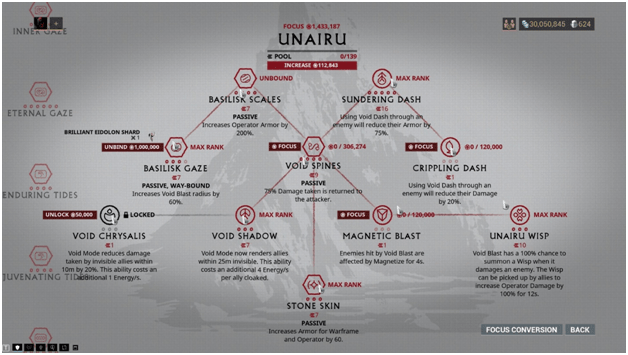 A school of focus, intelligence and mind power, those guided by this school excel with inner strength and energy. 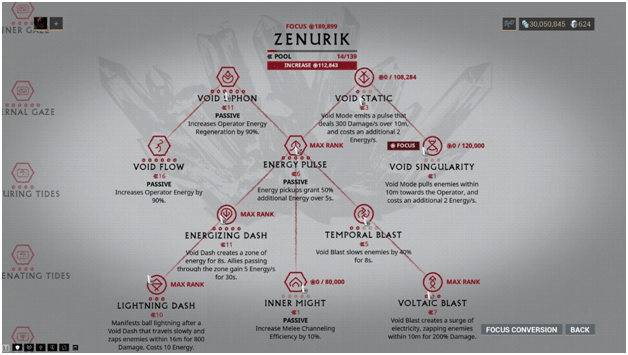 The focus pool is the capacity of how many passive or abilities you may have activated and is shared by all schools, so no matter what school you have, you will always have the same focus pool capacity. The higher your focus pool, the more passives you can have active. Upgraded passives need more capacity and to have a larger amount of stronger passives, you need a larger capacity thus requiring you to upgrade your focus pool. 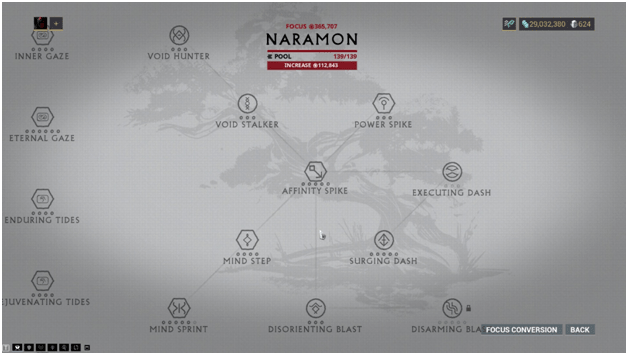 When activating passives, focus pool will be drained depending on what passive is activated and what its level is. Above you may see a school with no passives activated giving it a 139/139 focus pool. 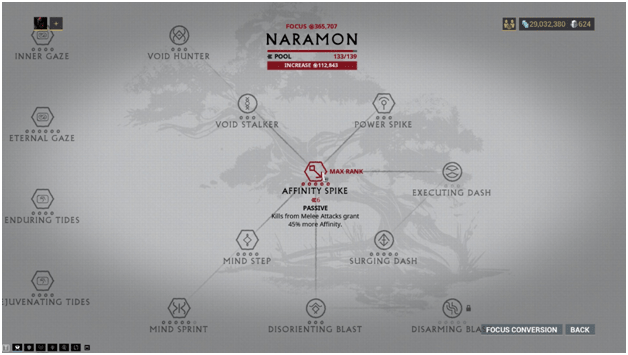 Above you may see that we have activated Affinity Spike which takes up 6 capacity thus giving us a remaining 133/139 focus pool. 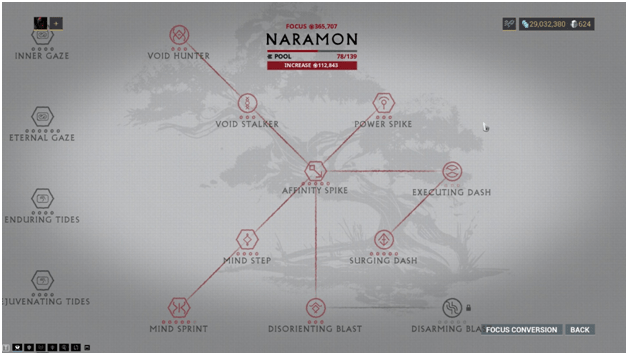 The more passive you activate will affect the more capacity that will be used from your focus pool. If you do not have a large enough pool capacity, then you will be unable to equip more passives or abilities. As you can see in the image above we have activated more passives thus taking up more from our focus pool. These can be changed at any time if the player decides they wish to disable a certain passive or make room for another. 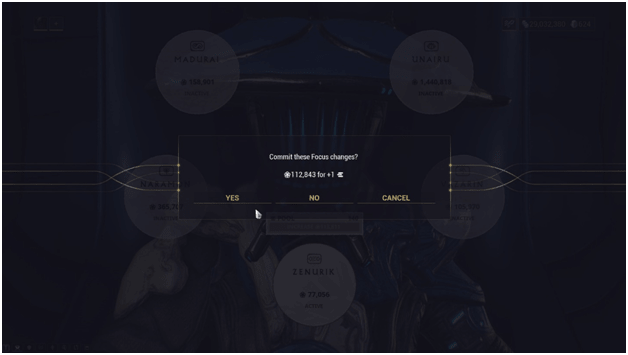 Aside from the normal abilities that each school respectfully has, some abilities may be unbound which allows them to be used by other schools at the cost of focus pool capacity. This allows you to make your operator more powerful by allowing them to gain passive abilities from multiple schools. To unbind an ability or passive, you are required to have a spendable amount of 1 million focus and a Brilliant Eidolon Shard which is obtained by capturing (not killing) Eidolon Teralysts, Hydrolysts and Gantulysts. 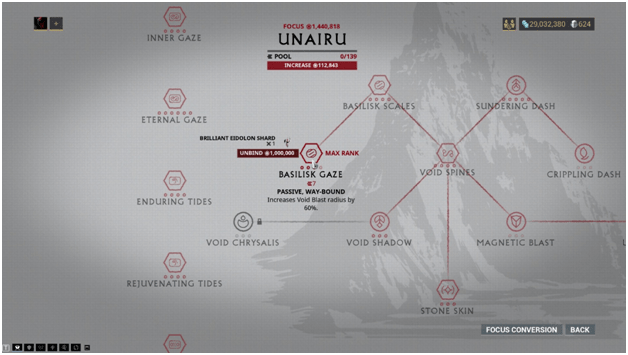 Once an ability is unbound, it may be used by any school along with the original abilities the school has basically granted any school the privilege of using other way-bound abilities. When activating way-bound passives, focus pool capacity will be uses and may need to be upgraded to unlock the complete potential of your operator. 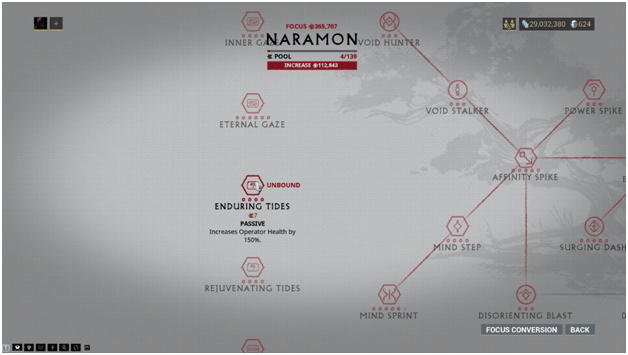 How to get Focus

In order to start gaining focus, players must equip either a Warframe or weapon with a lens. These are used to produce focus which is based off of how much affinity that is gained during a mission where a percentage of the total affinity is generated into focus.You may only have one lens per item which may also be changed destroying the current lens and replacing it with a new one. 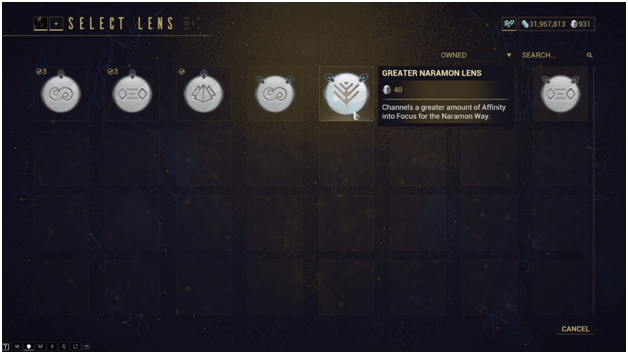 In order to equip a lens, one simply needs to go to the chosen Warframe or weapon, which must be maxed out and select actions which will bring up another menu where they will select focus lens from a selection of different lens that they have. 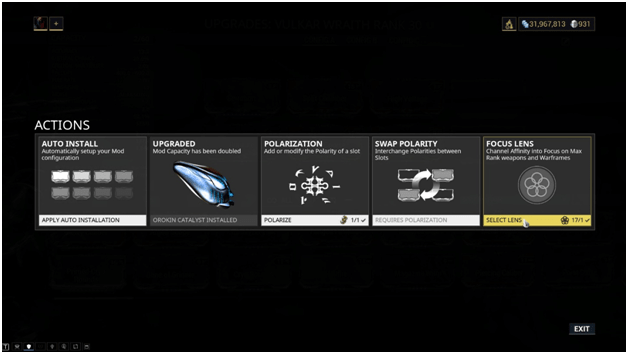 Once a weapon or Warframe has been equipped with a lens all you need to do is do missions and the affinity you gain will have a percentage converted to focus. It is possible to have more than one items in your load out that have a lens installed, each able to gain focus when used or when affinity is earned. By having a lens equipped it will convert a percentage of the excess affinity which the Warframe or weapon would earn. 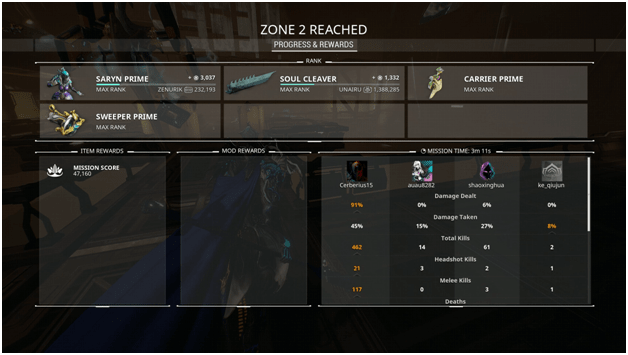 There are 3 types of lenses that each generate a different amount of focus. 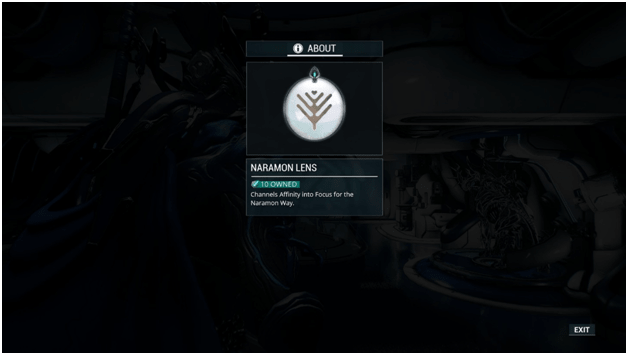 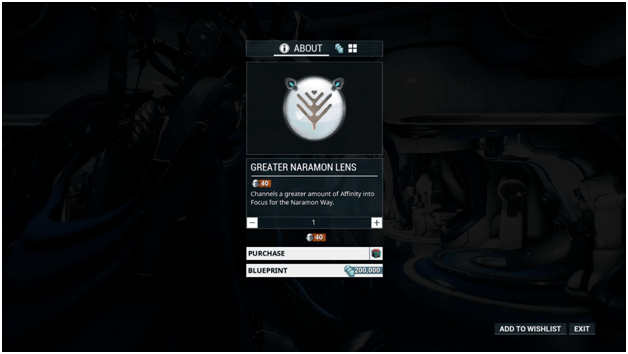 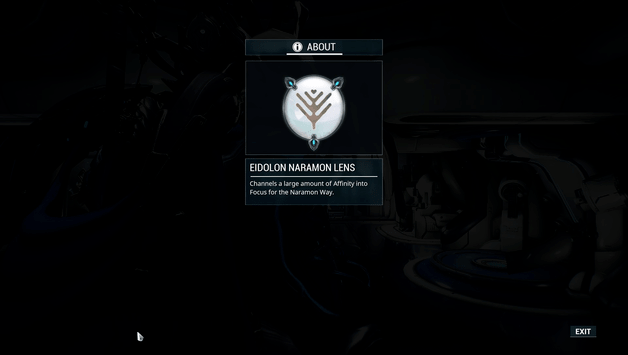 Getting lenses may be a hard at first for some because and might not be able to get them as soon as possible, however there are different ways to get lenses as shown below.

Some bounties on either Cetus or Fortuna have Regular Lens as a reward and there is a good chance to get them when doing them. Getting the lens may require multiple tries as the reward is based on RNG (random number generator). 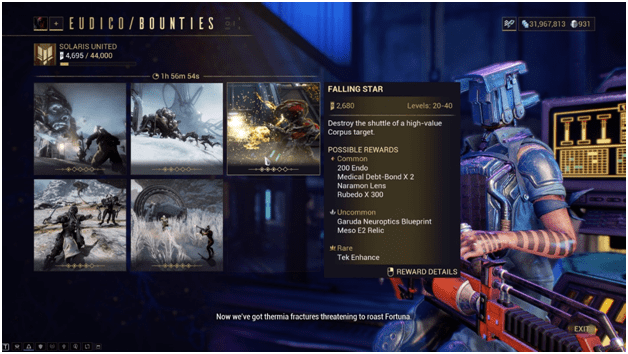 Greater Lens blueprints may be purchased from the ingame market aboard the players landing craft and may be crafted once all the required materials are available including 4 regular lenses which is required as well. 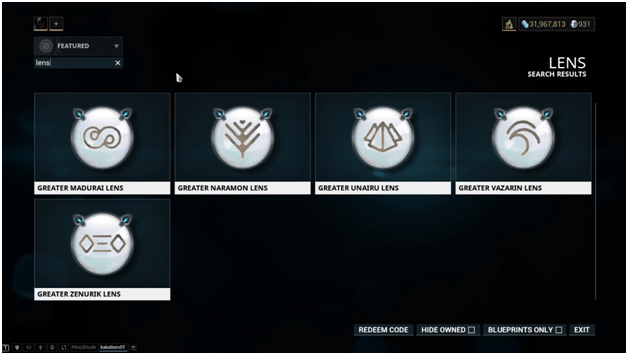 These bounties have a chance to reward the player with Eidolon Lens Blueprints, however some may need to redo the mission due to the chance of obtaining it being not so high. Once obtained the player may craft it using its required. 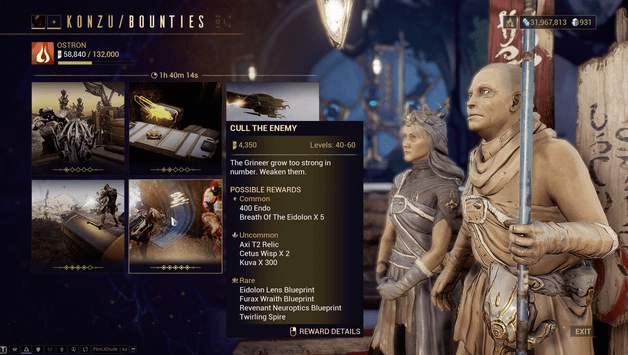 It is possible as well to earn lenses from incursions and they may also be traded from one player to another.

Farming focus is not that hard as you simply need only gain affinity which can be easily done by killing enemies. To farm focus you need to use the weapon or Warframe that has a Focus Lens in it. The more enemies you kill, the more focus you generate thus doing missions with a lot of enemies will make farming focus easy and efficient. Using Warframes that deal large area damage or that can kill multiple enemies at a time are best for most of the farming. It is possible to trade Eidolon Shards for focus as well but might take a bit of time to farm due to the need to kill Teralysts. Killing a large number of enemies or using stealth to kill enemies are the best ways to earn focus. 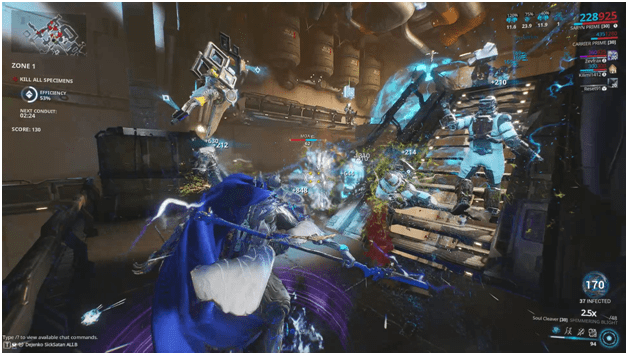 These are yellow orbs that can be picked up and will activate a buff that causes focus earned to be multiplied by 8x for 45 seconds. Picking these up at certain times is crucial especially when you can follow up and kill several enemies after. 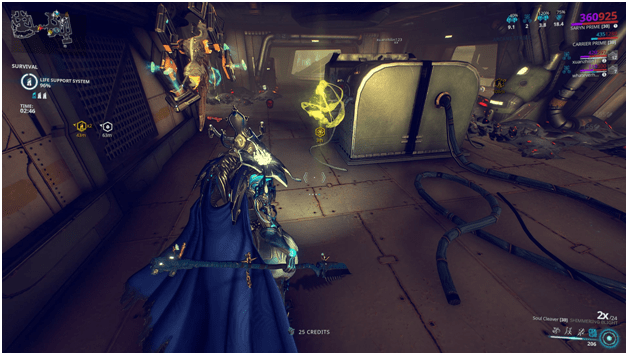 There are several missions that you can do to farm a lot of focus at a more efficient rate some of the suggestions are listed below.

This mission is very efficient and will guarantee a large amount of focus as it has unlimited enemies and with each zone advancement the enemies become stronger and will give larger amounts of affinity as the player’s advance. 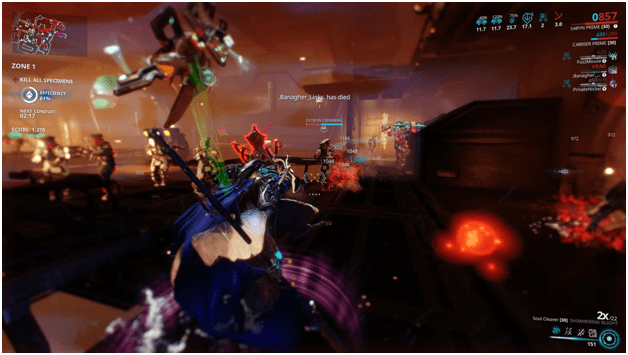 This mission type is good for focus farming as well due to the unlimited amount of enemies which also scale as the time lengthens as well as the chance to farm materials and items the player might need later on. In addition, if you do focus farming on a survival fissure you will benefit the longer you stay due to the boosts you gain every 5 minutes which include resource, affinity, drop chance and resource boosts allowing you to farm several things in one mission. 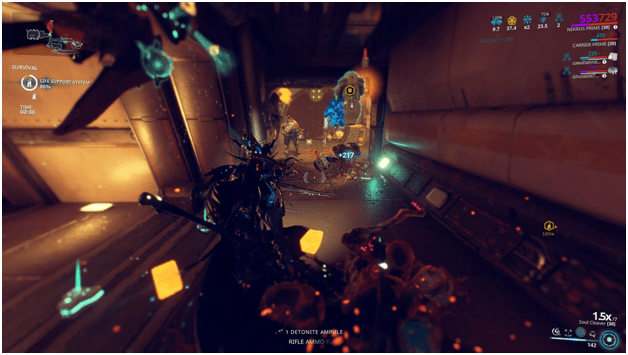 Another way of farming focus can be done by using stealth and clearing an exterminate map while keeping the stealth affinity multiplier active by dealing stealth kills which can be done using a Warframe that has invisibility or that can disable enemies and make them susceptible to stealth kills. Maintaining a multiplier and killing several enemies in succession will aware very high amounts of affinity thus generating more focus. 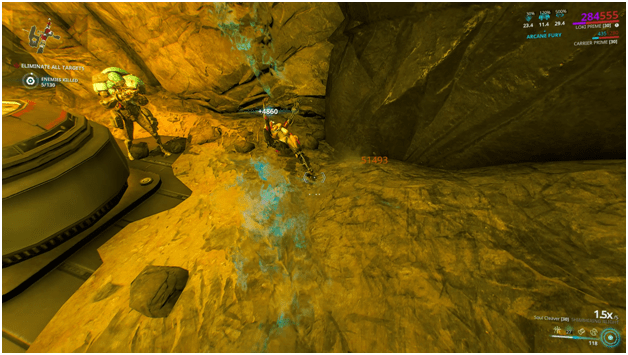 Focus plays a very important part in the game and it is advised to try to farm as much as you can in order to maximize the schools as they have good benefits and become much useful later on. It doesn’t take too much effort to farm focus and can be done easily with or without intention just by playing normally. Choosing the right frame when focus farming will benefit greatly such as a unit that can become invisible or that can disable enemies for stealth kills when doing a stealthy approach or a frame that can kill multiple enemies quickly for survival or onslaught missions. 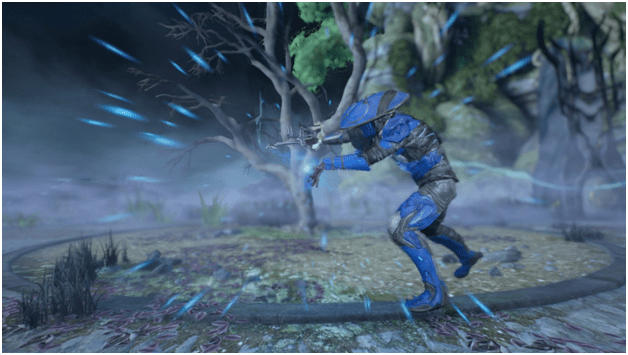