The Acceltra is an automatic rocket launcher that fires plasma rockets which was released along with Gauss and serves as his signature weapon. 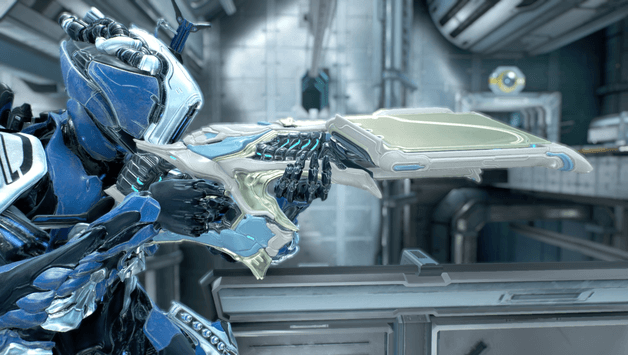 The Acceltra fires plasma rockets which are capable of dealing continuous damage in an area at a certain range or to a target at close range.

This weapon fires rockets in quick succession which only explode if the projectiles have travelled a certain distance.

Sprinting will cause the weapon to reload much faster and when used by Gauss it will be even more quicker as it is his signature primary weapon. 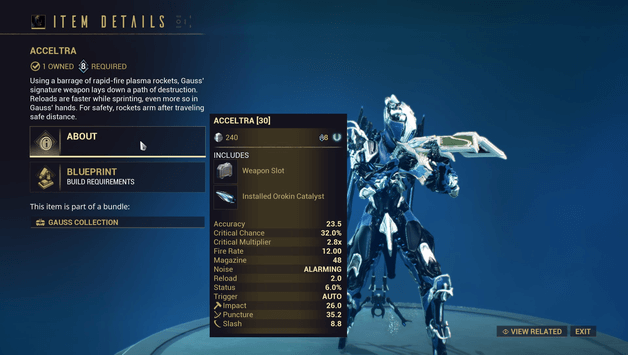 The Acceltra has the following base stats:

To use the Acceltra, you must have a mastery rank of 8 or higher.

Check Out How to Get Other Weapons

How to Get Acceltra? 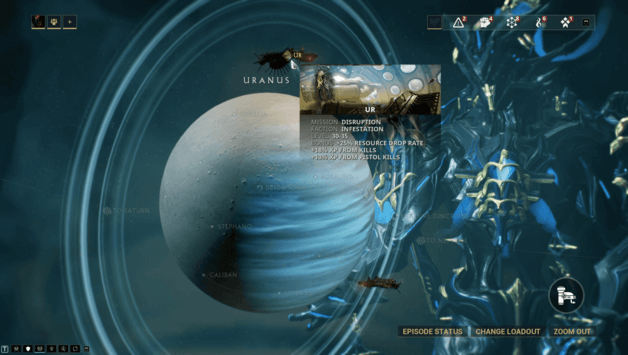 The Acceltra may be obtained in the Ur disruption mission which is located on Uranus. 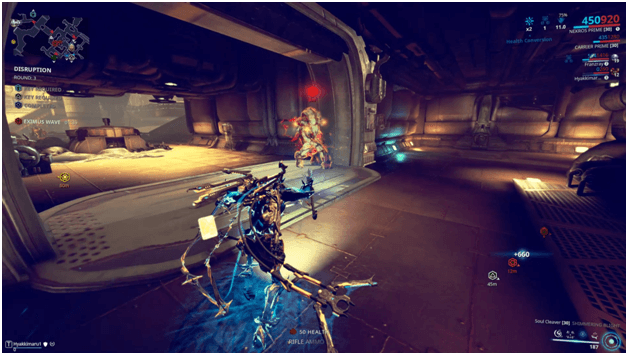 Acceltra along with Gauss’ secondary weapon the Akarius, has a chance drop from demolysts which are encountered during the said mission. 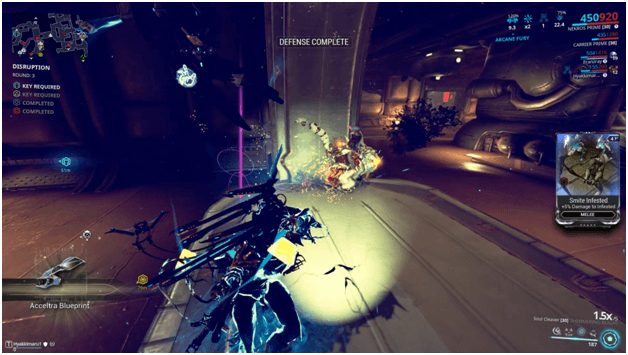 Upon killing a demolyst, a blueprint for the Acceltra may drop which will be picked up when approached and will remain in your rewards list until you extract from the mission. 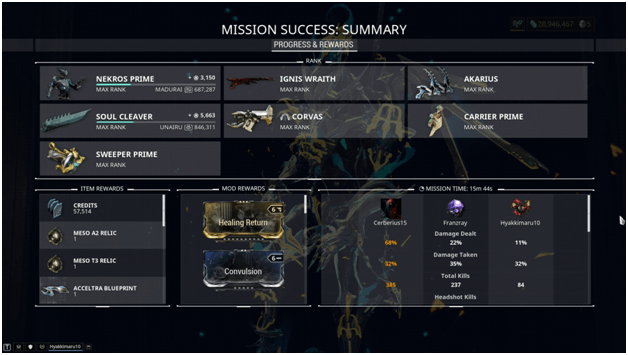 Based from our runs, it is highly expected to acquire the Acceltra blueprint after killing around 8 – 24 demolysts.

The Acceltra may also be purchased fully built for 240 platinum in the market located on the orbiter.

Having a good combination of fast successive rockets as well as a great deal of area damage, the Acceltra puts a lot of weapons below its place.

Damage can scale quickly for this weapon and the critical chance along with a high critical damage multiplier make it even deadlier.

The Acceltra can be easily modded for different playstyles and can be used to deal a lot of damage in mere seconds.

Modding this weapon with more damage and elemental properties will ensure it not only does high amounts of area damage but also deals extra damage against enemies. 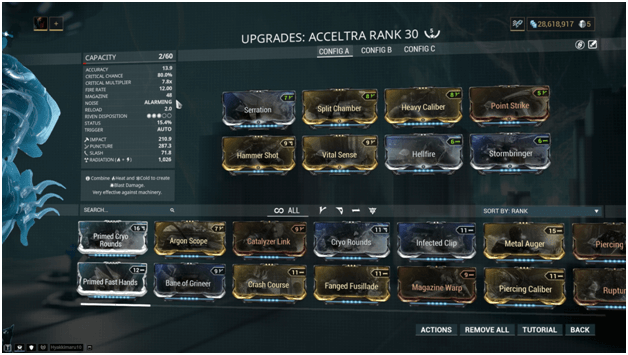 Each shot fired will have a high chance to deal a critical shot and every few projectiles are guaranteed to deal critical damage.

Even with the addition of Heavy Caliber, the Acceltra still retains a good deal of accuracy allowing you to fire a huge barrage of rockets and deal large amounts of area damage.

This build offers a large amount of damage per second and will easily kill groups of enemies due to the radius of the projectiles impact. 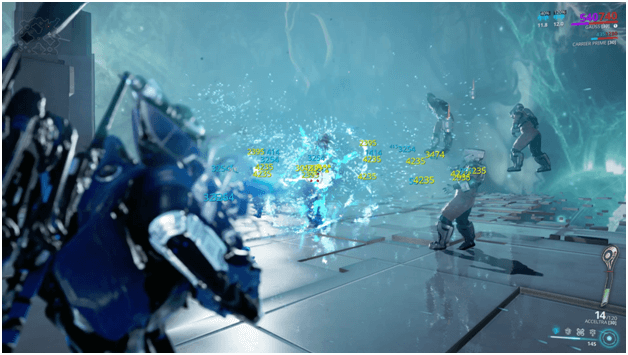 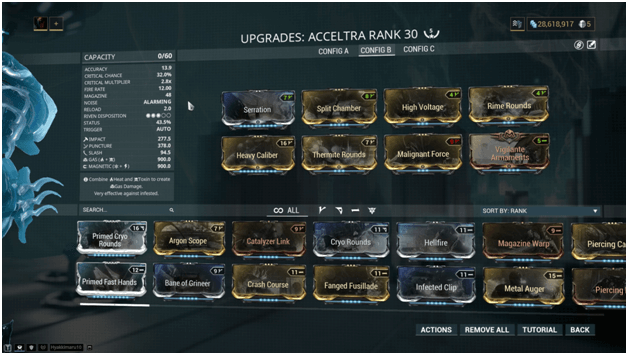 Although the status chance of the weapon is low, a build can still be made to focus on applying status effects on enemies.

With the Acceltra’s good ammo capacity and its fast rate of fire, it is very likely that status effects will occur during shots.

This build still retains a good chance of dealing critical damage and along with the addition of status chances, more damage can be dealt due to enemies being weakened or status effects that deal damage over time. 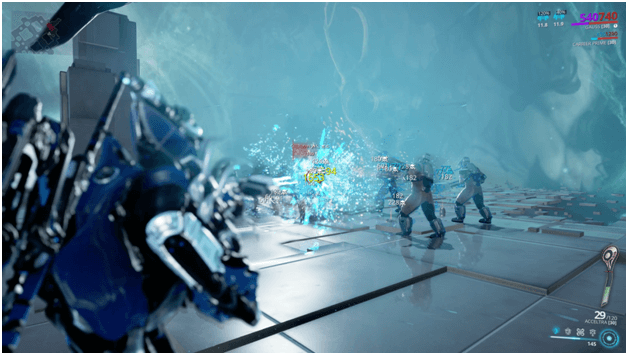 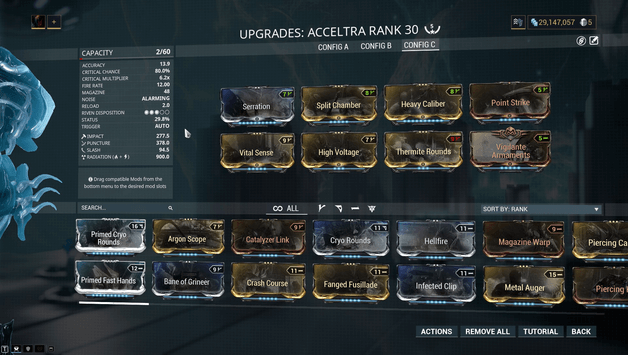 The Acceltra Hybrid Build is a combination of both the critical build and status build which offers a balance between dealing critical damage and applying status effects.

Enemies who suffer from status effects will be subject to taking additional damage over time or getting inflicted with weakening status effects while critical damage will add to overall damage.

Critical damage and status effects may be dealt to enemies while the damage of one or the other can finish of groups of enemies. 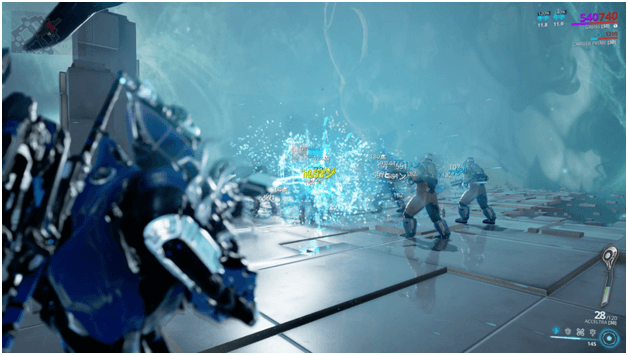 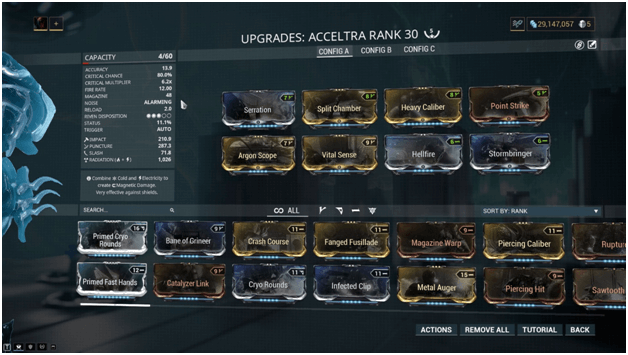 This is a slight modification of the critical build where we include Argon Scope to furthermore increase the critical chance of the Acceltra.

This allows more damage to be done if one can accurately deal headshots to enemies and once a headshot is dealt, the buff from Argon Scope will affect all shots followed regardless of where they are targeted as long as the buff remains. 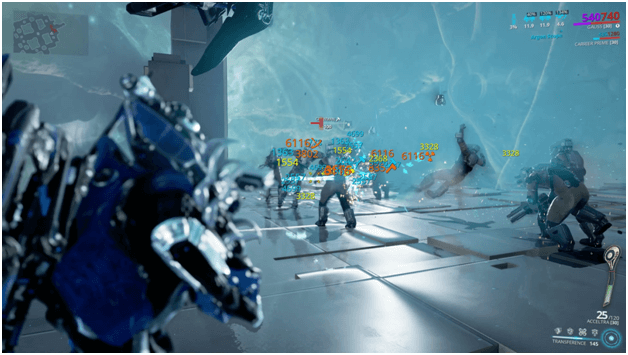 There are many other ways to build the Acceltra and these can be used as base or basic builds which become situational in many missions.

The Acceltra can be modded in different ways based on the preferences of the user and these are good choices to pick from when starting out as they provide good reference and have a good damage output.

The Acceltra’s base damage alone is high for a standard primary weapon and along with the addition of the projectile dealing an area of effect impact, a lot of options are viable when modding.

Its high critical chance guarantees there will be several critical hits dealt and when modded well, large amounts of damage are likely to be the outcome.

Its passive of being able to reload faster when sprinting can easily be triggered making it easy to reload the weapon in crucial moments.

A plasma rocket firing weapon is exactly what the Acceltra is and it can certainly pack the punch that is expected of it. 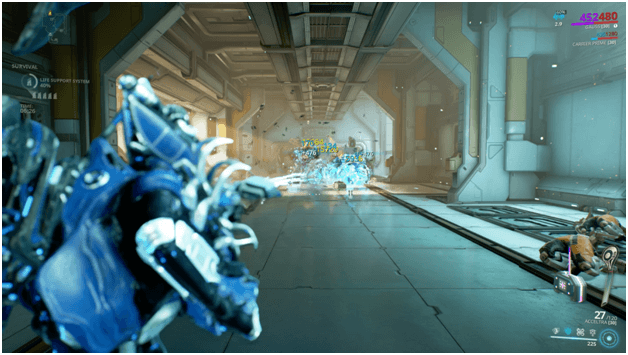