The Ogris is a rocket launcher of Grineer design which fires rocket projectiles that deal heavy blast damage in an area. 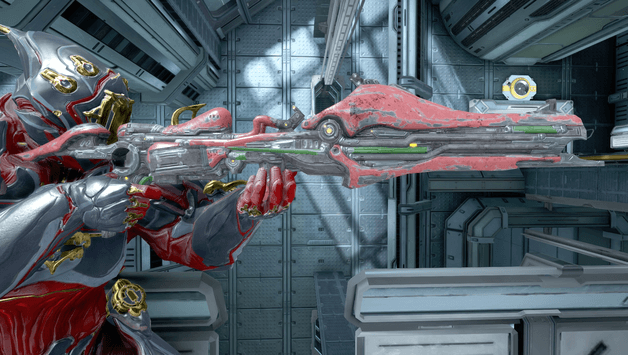 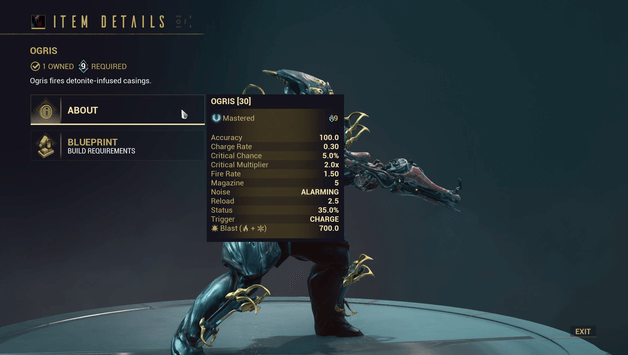 The Ogris has the following stats:

The Ogris requires a Mastery Rank of 9 before it may be used by players and must be researched at the Grineer Lab in the dojo before it can be replicated and crafted.

In order to acquire the Ogris, it must be researched at a Grineer Lab in a dojo before being replicated for crafting. 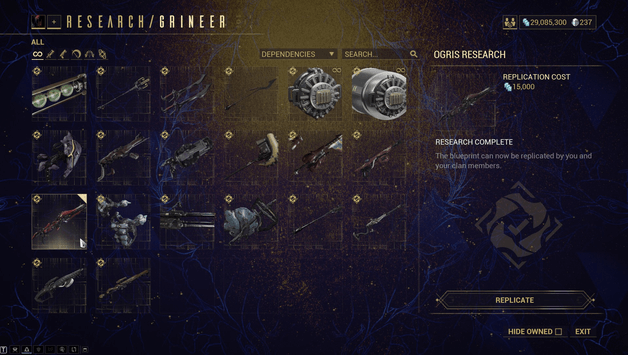 The Ogris blueprint is available to be researched at a Grineer Lab which must be built at a dojo before beginning research.

Once research is finished, the blueprint may be replicated and later on crafted in the orbiter.

The Ogris can only be crafted after getting a replicated blueprint from the dojo and is unavailable to be purchased for platinum.

With its heavy damage and large area of effect, the Ogris provides huge amounts of damage that is capable of killing several groups of enemies.

Its high base damage is capable of reaching extreme amounts when different damage mods are installed, leading to large amounts of damage.

With the addition of mods such as Nightwatch Napalm and Firestorm, the Ogris can be modified for several types of builds, adding damage per second and or more area of effect to the build.

With the innate blast damage, Ogris may achieve 3 combinations of different elements. 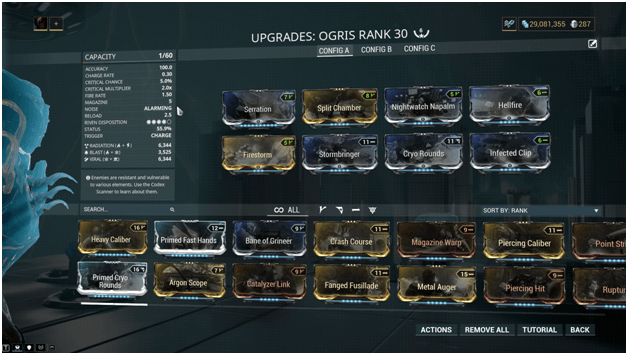 This build aims to utilize Nightwatch Napalm after dealing a heavy amount of different elemental damage to enemies.

Nightwatch Napalm will leave behind an area, burning enemies that remain or stay in it, taking damage over time.

The initial area of impact will be very large due to Firestorm, making enemies easy to clear out regardless of how many are in an area.

Using this build will guarantee heavy damage followed by additional damage per second which is great for controlling an area with sustained damage.

Around 3 different elemental combinations or 2 including a boosted blast damage. 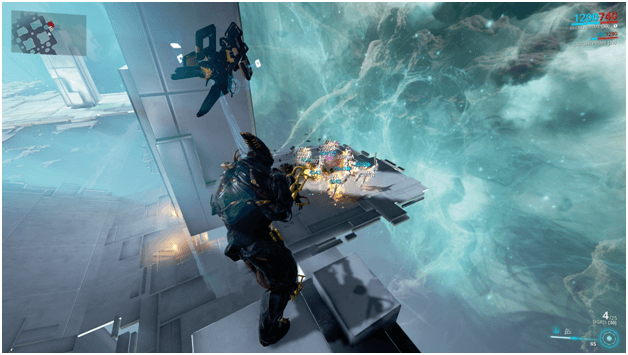 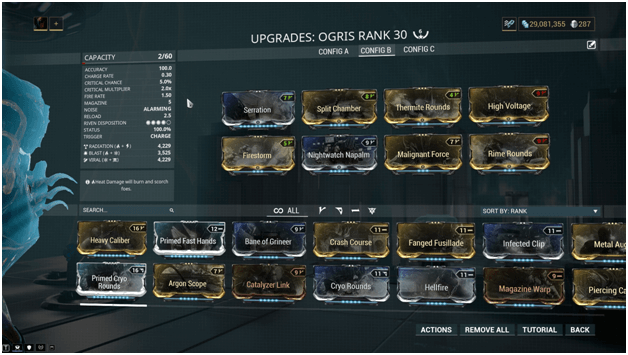 With similarities to the previous build this build deals a large amount of damage but with more focus towards status effects.

The status chance of the build reaches 100% and enemies are surely to suffer status effects from the build.

Along with the initial damage in a large area, enemies who are inflicted with status effects will either be weakened or take additional damage over time.

Using this build will damage enemies and even kill them while inflicting status effects on any survivors, killing them or making them easier to kill with successive shots. 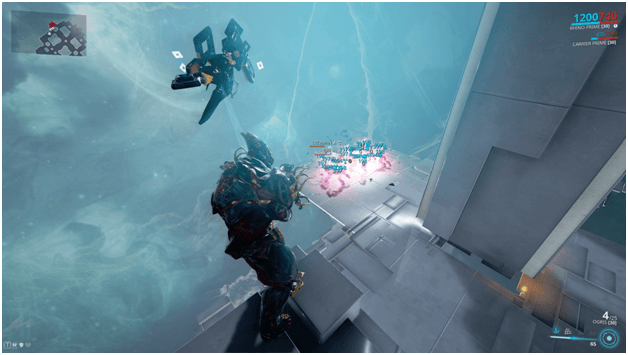 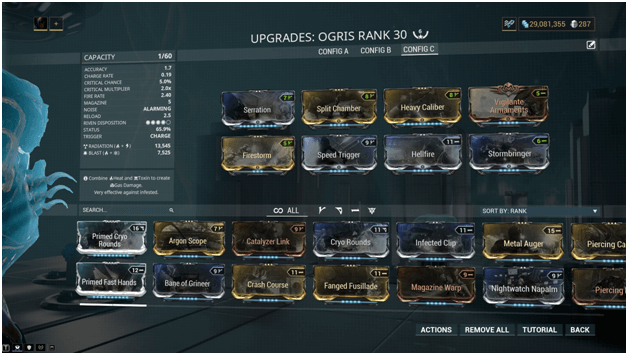 Utilizing Firestorm and increasing the damage output of the Ogris, this build aims to deal heavy amounts of damage in an area based on initial impact.

Speed Trigger has been added to allow faster successive shots while Heavy Caliber along with the multishot mods increase the damage further.

This build can be modified to deal an elemental combination to focus on whichever element is chosen to deal high damage to enemies with weakness towards the element chosen.

An addition to the element chosen is the blast damage which help with crowd control, knocking enemies back.

Using this build allows you to lay suppressive fire or even fatal area damage to enemies, easily clearing or disrupting groups of enemies. 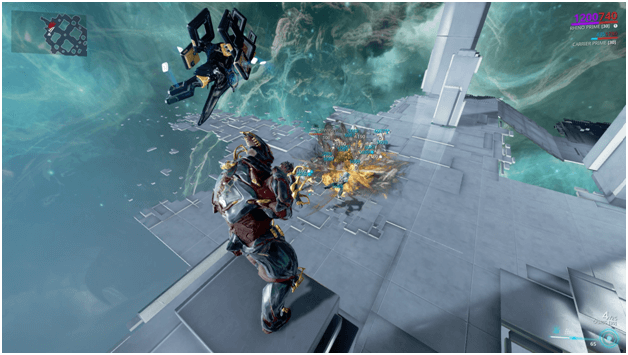 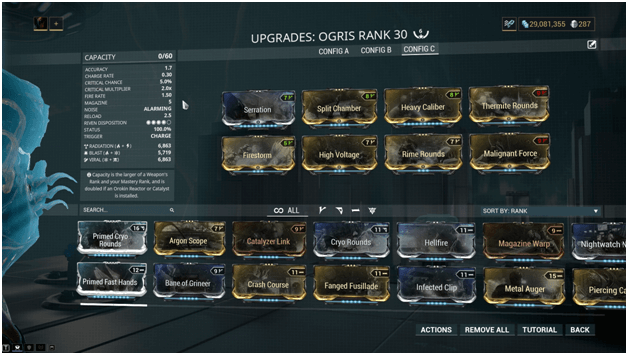 Just like the previous build, the Heavy Caliber AOE Status Build deals large area damage but with a twist of status effects.

Firestorm will increase the radius of the impact of the ability which can not only deal large amounts of damage in a huge area but also proc status effects on enemies hit.

With the capability of being modded to have several different elemental combinations, even more status effects may be inflicted on enemies.

Using this build can guarantee status effects as well as heavy amounts of damage and combining everything together will increase the damage per second capable of being dished out by this build. 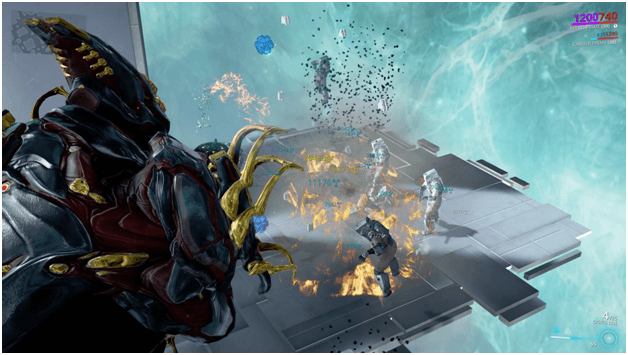 These are not the only builds available for the Ogris, but they are pretty useful in many situations. There are tons of ways to mod this weapon and it all can vary depending on the user and their choice of mods.

First of all, the weapon is a rocket launcher which is pretty hardcore on its own with its large area of effect as well as the heavy damage it deals.

However, things don’t just stop there as when modded, the Ogris is capable of dealing incredible amounts of damage, especially with the addition of the status effects from its builds and the elemental damage.

With the high base damage provided, elemental mods can scale the damage to extremely high amounts and with the bonus of the large area of effect, enemies can be cleared in seconds.

Nothing beats a good old rocket launcher buffed out with the capability of incinerating enemies in mere seconds. 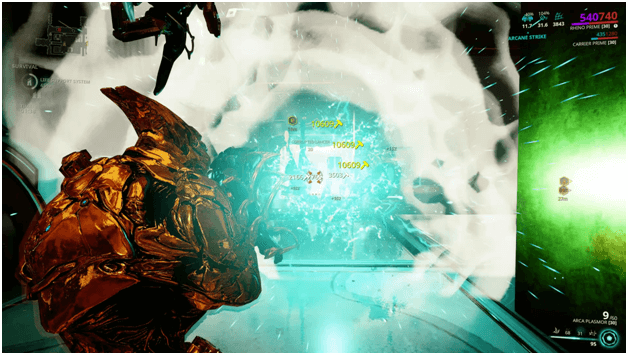