The Sigma & Octantis is a combination of sword and shield which is rewarded to players who have played Warframe for a long time.

Its elegance is not to be confused with it power as it is weapon that can be used in different ways, dealing swift and powerful attacks. 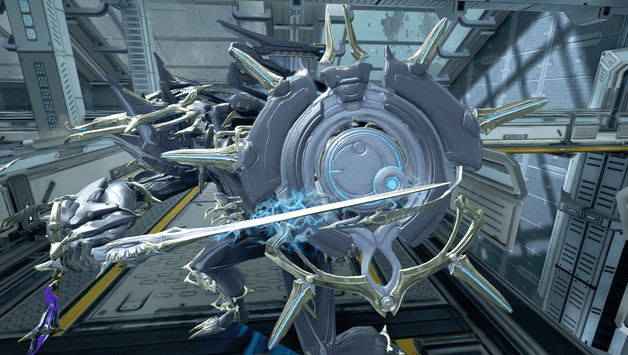 The Sigma & Octantis is a sword and shield type weapon. 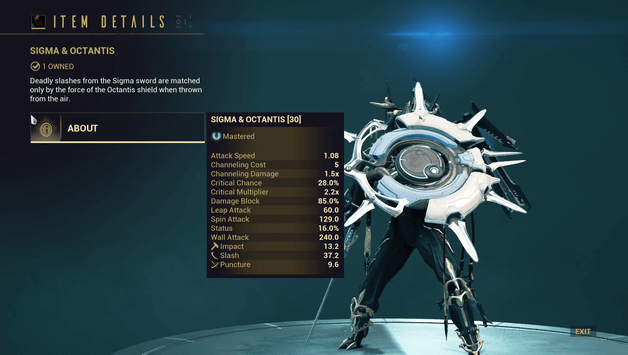 The Sigma & Octantis has the following stats:

The Sigma & Octantis does not require any mastery rank and may be used immediately after receiving it as a reward. 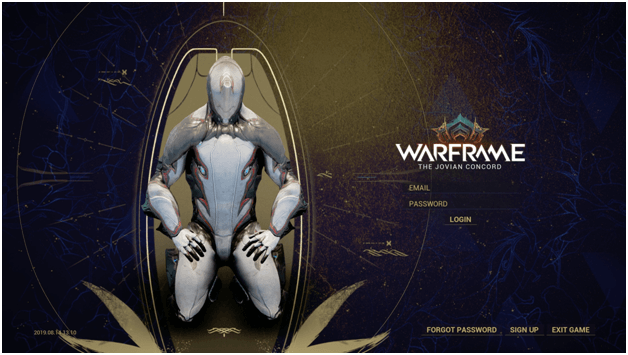 The Sigma & Octantis can be chosen as a milestone reward after 300 days have passed that the player has logged in.

This becomes available at day 300 and will be available every time another 200 days goes by.

When the milestone is reached, players will be given the option to select the Sigma & Octantis upon logging in.

The Sigma & Octantis is a very unique weapon, capable of dealing multiple strikes up close or being used from a distance by throwing the shield.

While mainly dealing slash damage it also has the ability to deal puncture and impact.

Its high critical chance makes it excellent for critical builds and even a status build is applicable due to the moderate status chance.

Due to the good combination of fast attacks and a ratio of critical and status chance, hybrid builds also work well with the Sigma & Octantis. 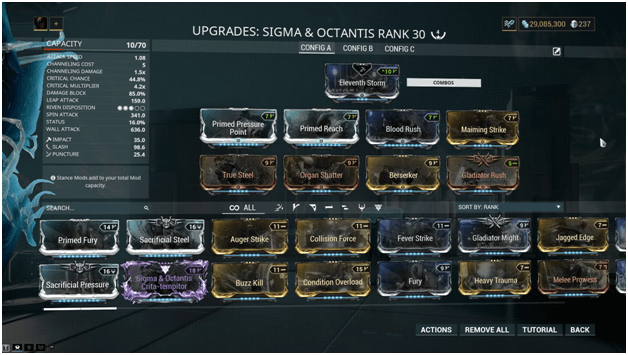 The Physical Maiming Strike build uses a traditional critical build set up along with the maiming strike mod which is meant to deal a large amount of damage the longer you fight.

Blood Rush and Maiming Strike are used in order to achieve higher critical damage which is easy to build up due to the quick strikes of the Sigma & Octantis.

Gladiator Rush has also been added to the build to add similar effects to compliment Blood Rush.

This build may lack in elemental damage but makes up for it with higher stacks of critical chance which eventually lead to red critical hits easily. 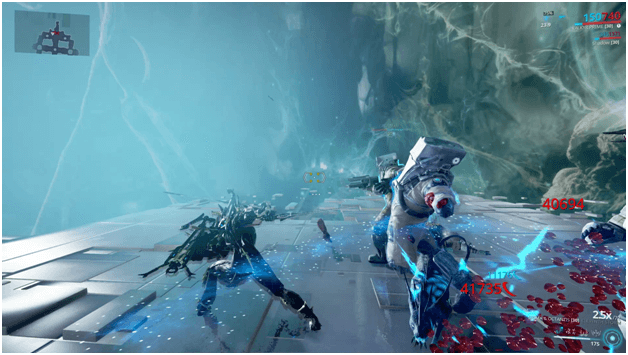 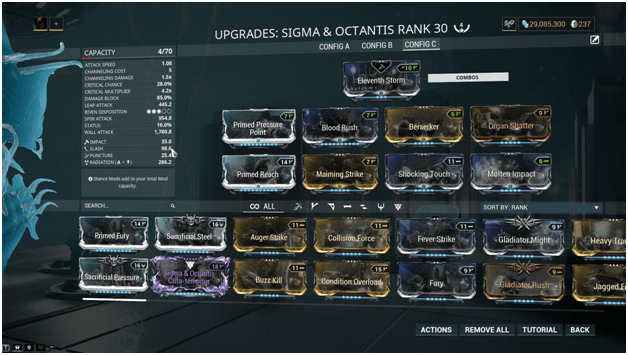 This is an altered build of the previous build, applying more elemental damage with the build but retaining the ability to deal high amounts of critical damage.

Maiming Strike is utilized to be used as a spin attack done during in between combos or spammed to make use of the critical chance.

The elemental damage will deal even more to certain enemies who are weak against a specific type of element making this deal excessive damage to enemies if planned out.

With the addition of an elemental combination, the build will guarantee excessive damage to enemies who are weak against the element. 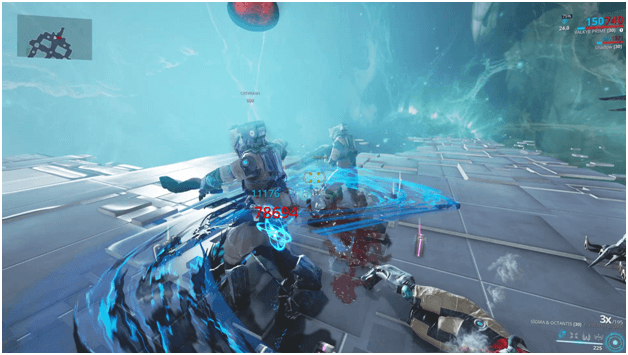 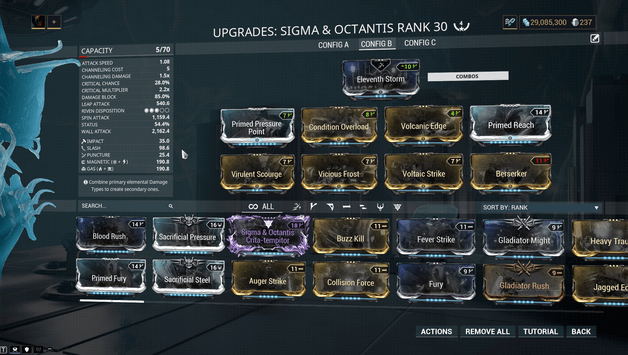 A more common build which proves effective with the Sigma & Octantis, especially with its shield throw attack is the Status Build.

Attacks will deal elemental damage as well as have a high chance to proc status effects on enemies, including the shield throw attack.

This build is useful for those who prefer to inflict status effects on enemies to deal damage over time or to weaken them even further.

Due to the high critical chance of the Sigma & Octantis it is highly likely that critical hits will still occur which will deal even more damage to enemies weakened by status effects.

When the Sigma & Octantis shield throw attack is performed, status chance can also be triggered giving a high chance of inflicting enemies from afar. 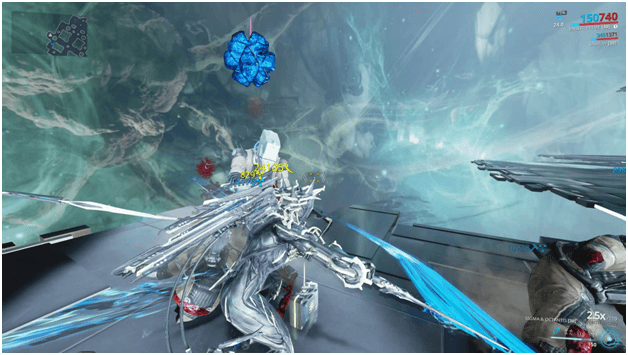 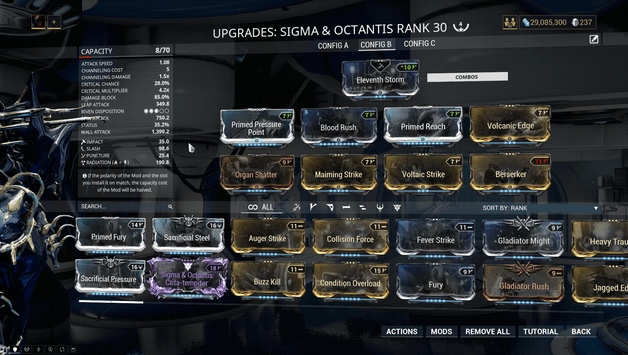 The Hybrid Build is mixture of critical and status builds which aim to deal critical damage with base elemental damage along with a decent chance to inflict status effects on enemies.

Mods from the critical build are combined with mods from the status build to maintain both critical and status chance while still having the benefit of elemental damage.

The Hybrid Build depends mostly on the buildup of combos to be able to deal successive critical hits which is easy due to the attack speed of the Sigma & Octantis as well as the addition of Berserker.

This build will work well by causing status effects to occur, weakening enemies or dealing damage over time, allowing them to be finished off with the critical hits.

Using this build can prove very effective against certain enemies who can be weakened by certain elemental combinations. 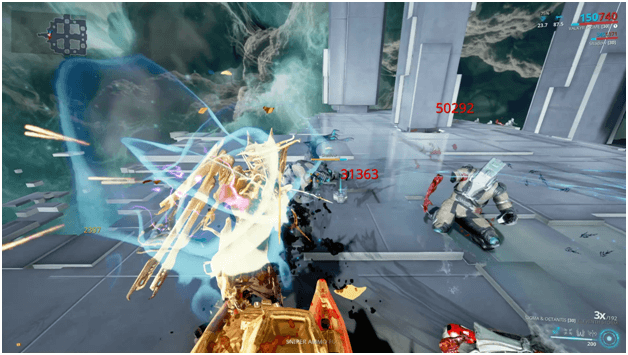 These are not the only builds available for the Sigma & Octantis, but they are useful in many situations.

The Sigma & Octantis is a very unique weapon, capable of slashing enemies up close with Sigma or taking them out from afar with a power tossing of Octantis.

Having a high damage block makes this efficient as well giving those who get into tough melee situations more protection.

Aside from being already powerful the Sigma & Octantis will boost its next attack when damage is blocked, increasing status and critical chance.

The Sigma & Octantis is a weapon that can be utilized in several ways and no matter how they are intended to be used, the death of enemies is surely the outcome. 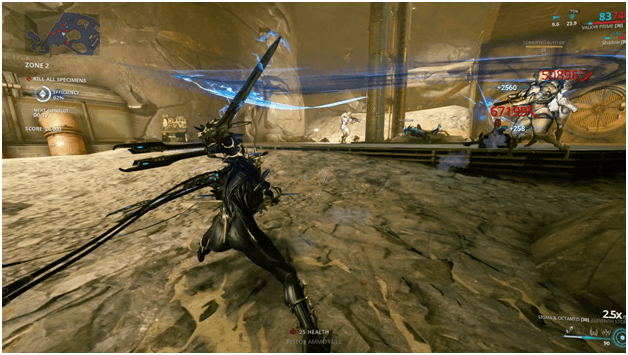