The Dera Vandal is a primary weapon, is the Vandal variant of the Dera, a rifle of Corpus design. 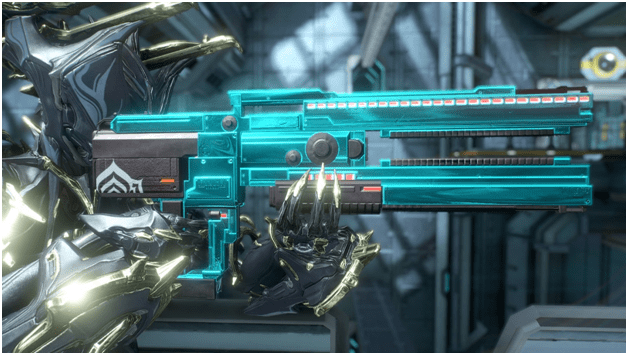 The Dera Vandal is the Vandal variant of the Dera, retaining most of its stats with a few changed as well. 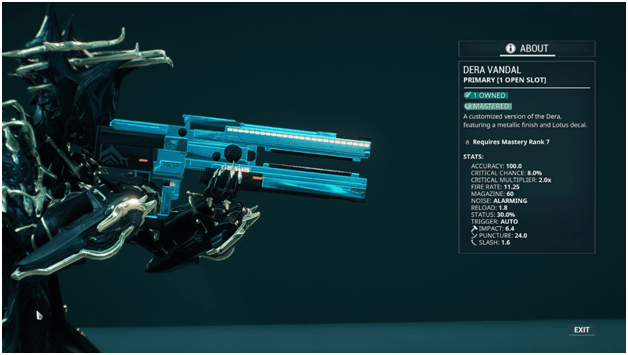 The Dera Vandal has the following base stats:

The Dera Vandal requires a Mastery Rank of 7 before it may be used by players and built using its blueprints and parts.

The Dera Vandal may be crafted with its blueprint and parts which may be obtained by as rewards from invasions or by trading with other players. 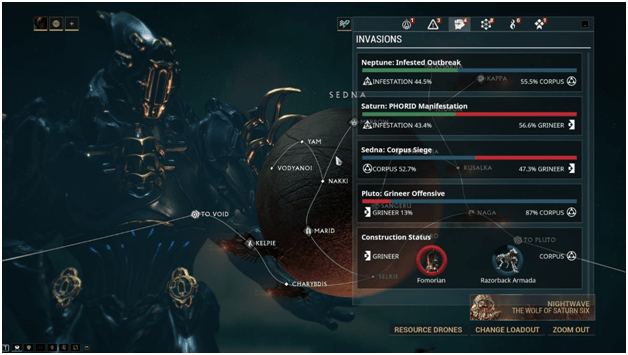 Invasions have different rewards and it may need timing and patience to look for and do the ones that give the Dera Vandal blueprint and its parts.

The Dera Vandal has great accuracy capable of hitting its mark on enemies very far away even when firing in full automatic.

It may lack in critical chance but still has the ability to score those hits along with its very high status chance making it viable for elemental damage and status builds.

It has a fair amount of damage and when modded well it is capable of reaching a high damage per second to the point where most enemies will not stand a chance. 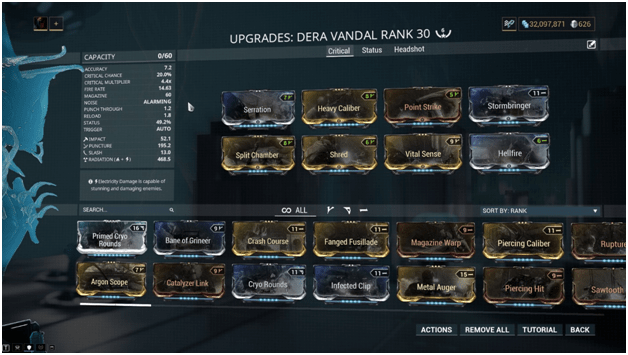 For this build, we use Serration and Heavy Caliber for an increase in overall damage while we add Split Chamber multishot.

To bolster the weapons critical capabilities, we include Vital Sense for a higher critical multiplier along with Point Strike to increase the critical chance.

Scaling from the base damage types, elemental damage is created by added 2 elemental mods which will combine into another element.

To top it off we add shred for a higher rate of fire as well as punch through to allow the projectiles to pierce and hit multiple enemies.

This build may not have the highest critical chance but when a critical hit occurs, it is bound to deal a decent amount of damage.

The weapon will deal extra damage to enemies that are weak against the combined element and as a bonus, since the Dera Vandal has a high status chance, this build may also cause status effects from time to time. 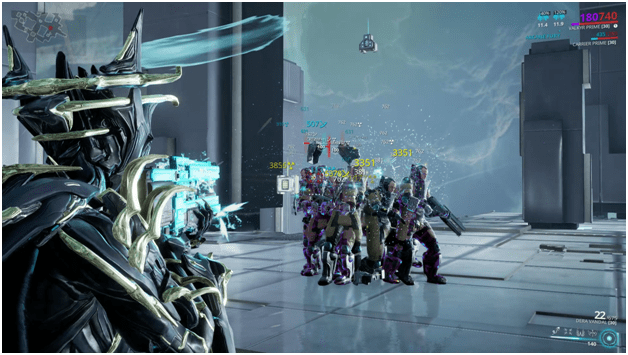 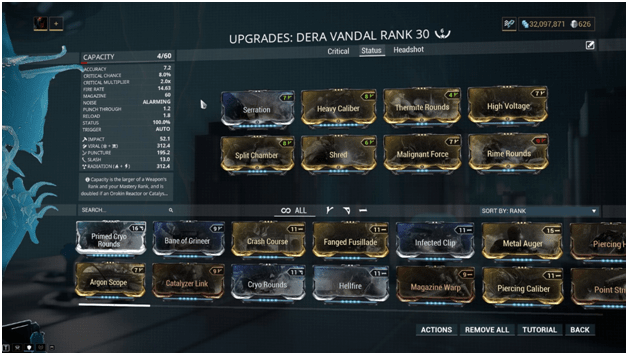 In this build we keep Serration, Heavy Caliber, Split Chamber and Shred but remove the other mods to make room for the 4 elemental damage and status mods.

The 4 mods bring the status chance to 100% and add a good amount of elemental damage scaling off of the base damage.

Depending on the mods equipped that may cause area of effect damage, damage over time or the weakening of targets under the effect of the status effect.

The elemental damage will also benefit the weapon and deal greater damage if the enemy is weak against the combined elements. 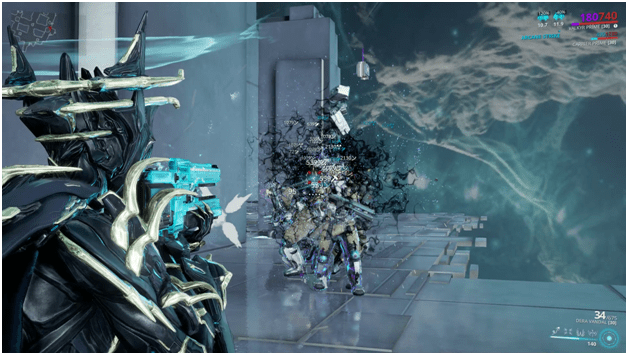 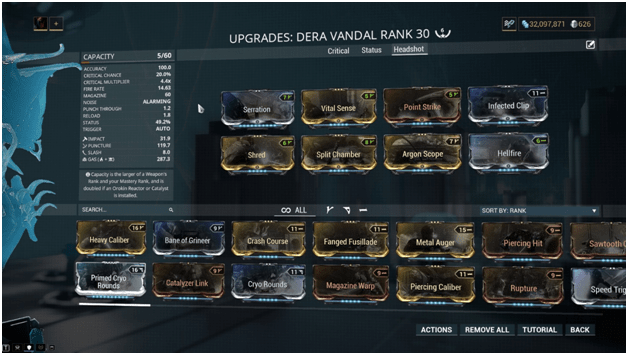 This build is similar to the Critical Build except we have swapped Heavy Caliber for Argon Scope.

This may appear to reduce damage due to the removal of Heavy Caliber but can be necessary for the accuracy needed as dealing headshots is a must for this build.

If one wishes to keep Heavy Caliber, they may remove Split Chamber instead. 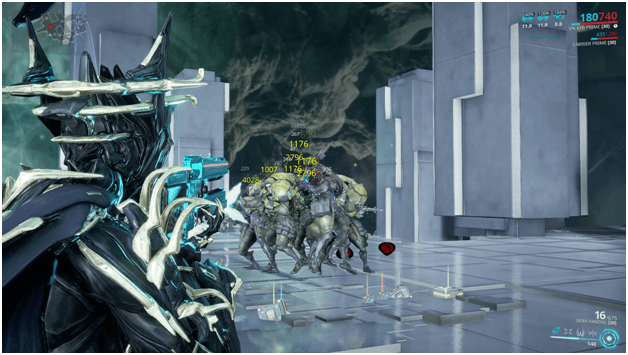 These are not the only builds available for the Dera Vandal, but they are pretty useful in many situations.

The Dera Vandal has a decent increase on its stats, especially the high status chance.

This makes it great for dealing status effects to enemies but not necessarily requiring a status build as the high magazine capacity and high rate of fire are capable of dealing a proc every now and then.

When modded well the damage dealt can reach great amounts of numbers and can be good against several enemies when the proper elemental combinations are created with it.

The Dera Vandal is quick, deadly and very accurate, it would make a great addition to anyone’s arsenal. 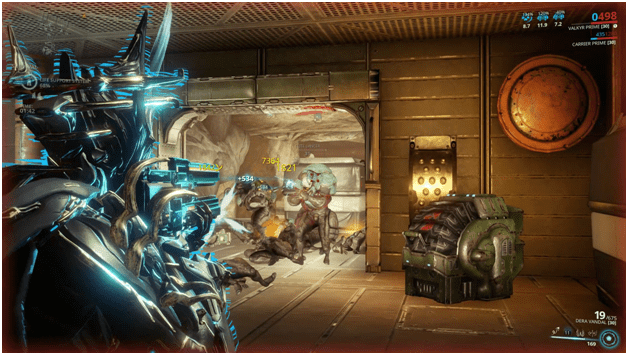