The Pandero, a secondary weapon, is Octavia’s signature pistol, resembling an 8-shot revolver. 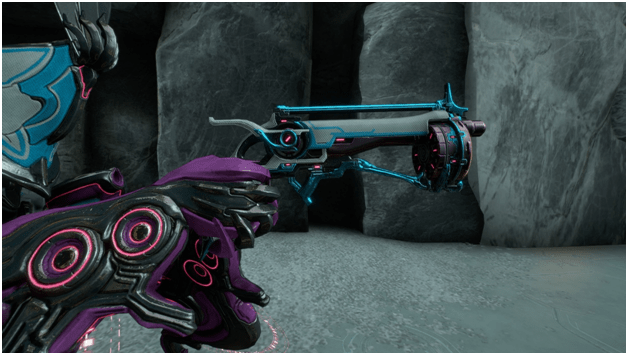 The Pandero is a semi-automatic pistol that has a resemblance to an 8-shot revolver. 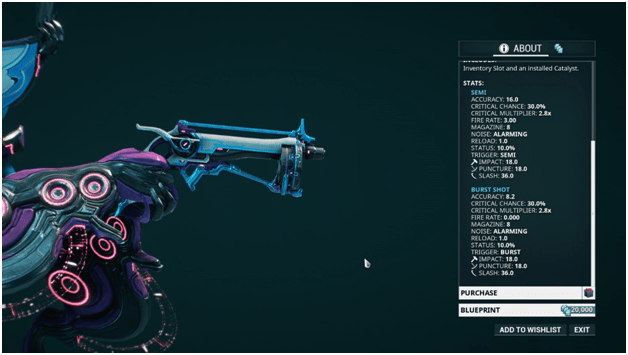 The Pandero requires a Mastery Rank of 8 before it may be used by players and must be purchased from the market.

In order to acquire the Pandero, it must be crafted after obtaining its blueprint. 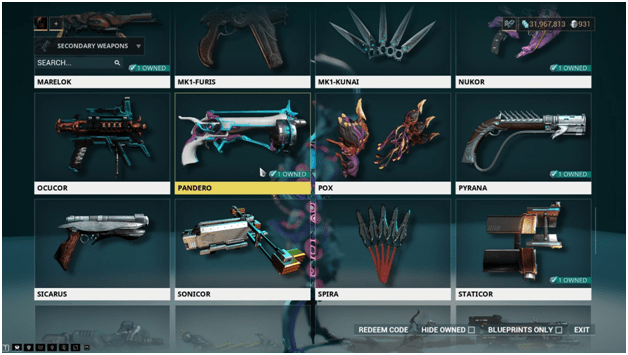 The Pandero blueprint may be purchased from the in game market.It may also be bought for 190 Platinum and already built.

With its well-balanced damage and its high critical chance, the Pandero can be easily modded for a good damage output.

Have two unique fire rates allows it to choose to deal shot after shot or unload a full barrage of bullets.

Customizing the weapon with a comfortable build will allow the user to make use of its different attack types. 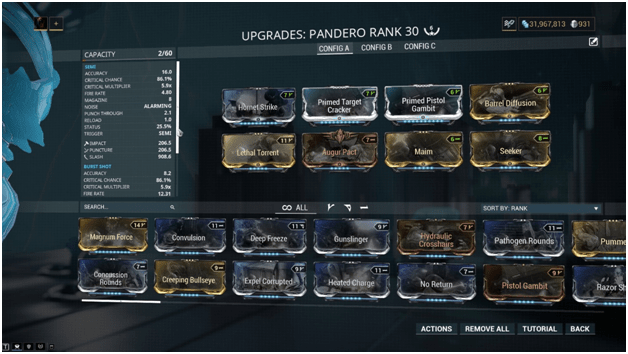 In this build we use Hornet Strike for overall damage along with Lethal Torrent, Barrel Diffusion and Auger Pact for multishot.

Adding Maim increases the overall slash damage scaling from its base damage while Seeker is used to add an additional punch through to be able to pierce and hit multiple enemies.

This build makes use of the base physical damage and scales it while aiming to deal critical damage with most shots in order to deal high overall damage per second to single or multiple enemies. 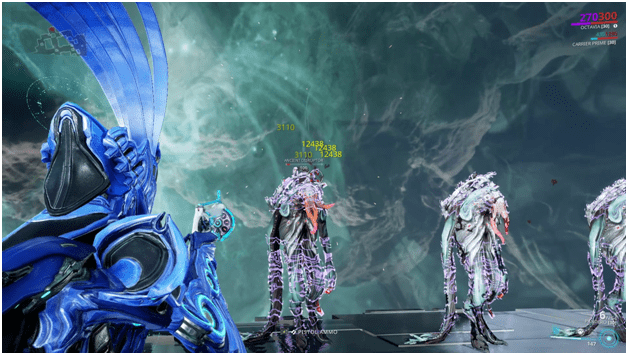 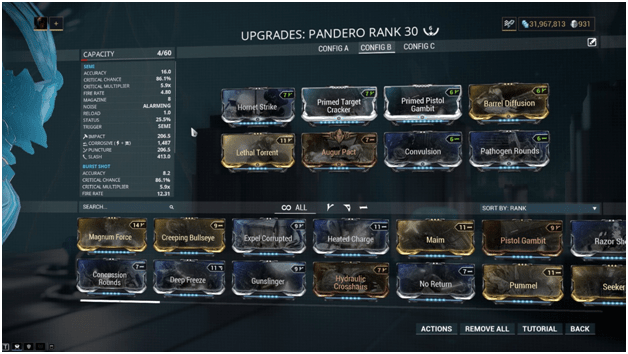 Similar to the previous build we remove Maim and Seeker in order to make room for 2 elemental mods for a better focus on dealing elemental damage to enemies.

This build make use of a high critical chance along with dealing amounts of elemental damage which may deal extra damage depending on the weakness of the enemies. 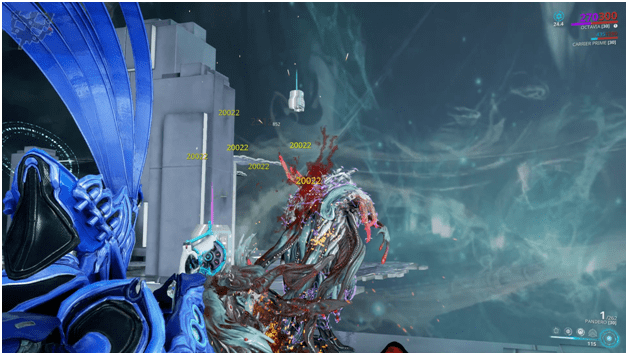 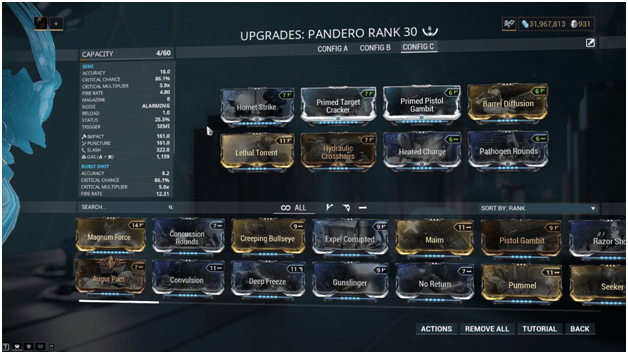 This build makes use of the Elemental Critical Build, however Vigilante Armaments has been replaced with Hydraulic Crosshairs which gives a buff that increase the critical chance after dealing a headshot.

The main use of the build is to deal more critical damage by increasing its chances using the Hydraulic Crosshairs mod in order to have a high damage output.

Being accurate may be required as it is required to deal headshot to gain the buff which then greatly increases the overall critical chance. 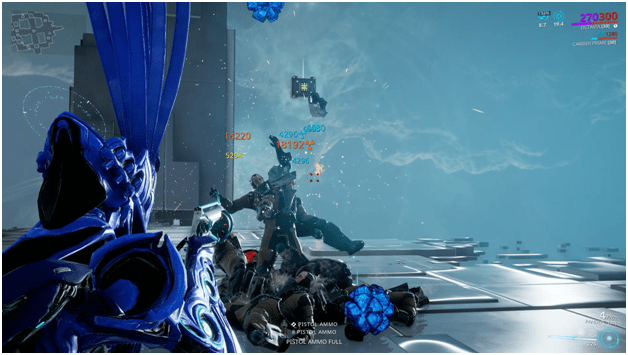 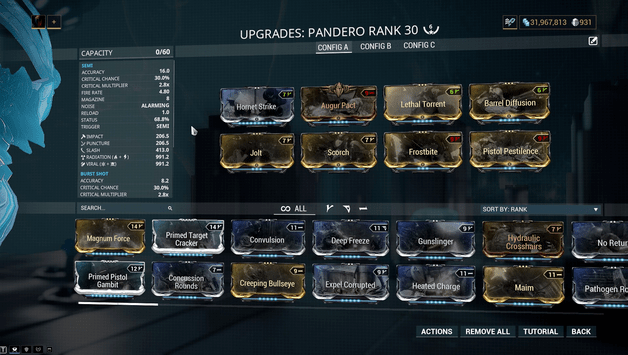 This build makes use of the Hornet Strike mod for an overall damage increase along with the 3 multishot mods that are Augur Pact, Lethal Torrent, Barrel Diffusion.

The focus of this build is to cause elemental damage with the high chance of applying status effects to enemies.

An added bonus of the build is that it is capable of dealing damage over time, damage in an area or weakening the enemies affected depending on the elements. 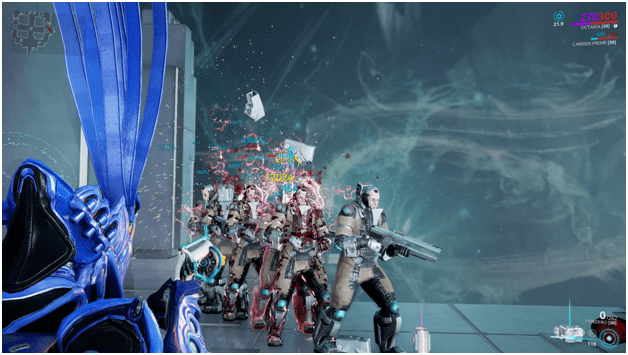 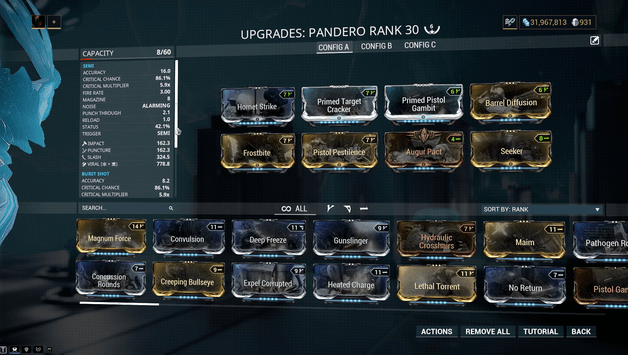 This is a combination of the of the previous builds, focusing on both critical damage as well as elemental damage and status effects for multiple sources of damage.

Dealing critical damage will add to an overall damage per second as well as the status effects that deal area damage.

Certain status effects will damage over time or weak enemies making them either take more damage or become more susceptible to different kinds of damage.

Along with the critical chance and status change the elemental damage that scales from the base damage will also deal additional damage to enemies if they are weak against the element.

Choosing the right mods to create the desired element will benefit the user greatly. 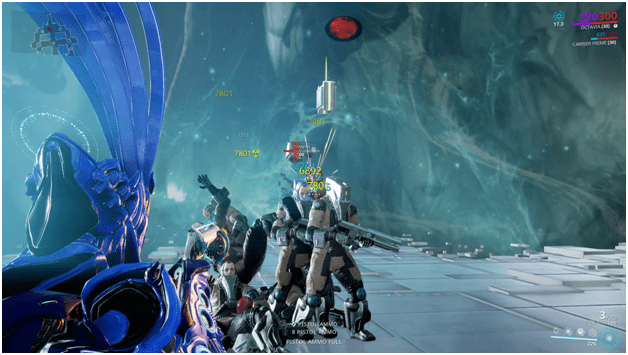 These are not the only builds available for the Pandero, but they are pretty useful in many situations.

The Pandero is a very unique weapon being able to deal a large amount of damage per due to its good base damage and its high critical chance.

Not only featuring one firing method, the Pandero has another attack which allow sit to completely unload its clip onto enemies in an instant.

When modded well this weapon can become very deadly and when used accurately it can kill several enemies in mere seconds.

Its high recoil may be a bother to others but one does not really need to fire many shots.

This is because the Pandero alone can already deal a sufficient amount of damage and when modded to certain extents, it can take on different enemies with ease. 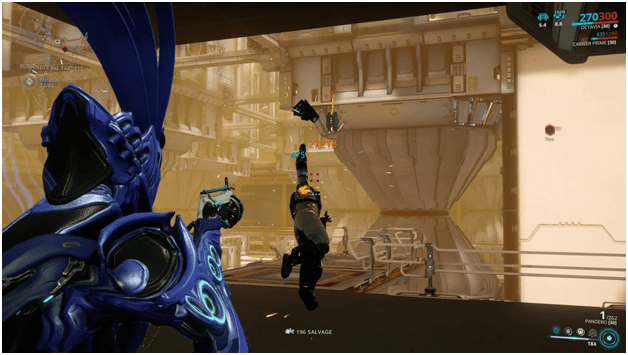