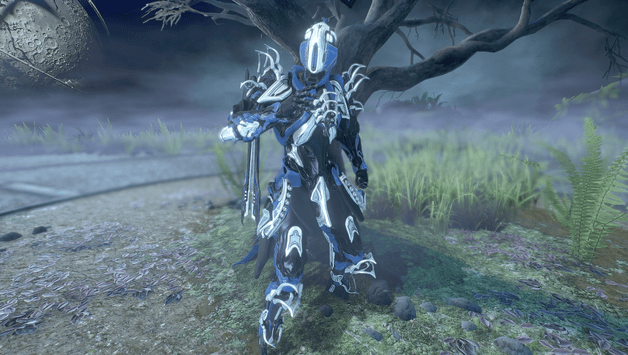 Gauss is a kinetic a speed based Warframe, dashing around at unstoppable speeds, disrupting enemy formations and causing chaos to his enemies who are to slow to counter him.

His abilities rely on his speed as he charges up to use his abilities and to be kinetically powerful in means of damaging his enemies as well as resisting their attacks due to his immense speed.

How to Get Gauss? 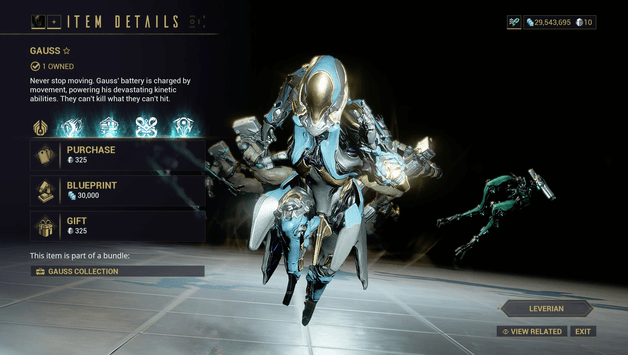 You may purchase Gauss’ blueprint from the market for 30,000 credits and need to farm for his parts to build him.

Gauss’ parts can be farmed and drop exclusively on Kelpie, a disruption mission which is located on Sedna.

It is also optional to purchase Gauss already built for 325 platinum from the market on the orbiter. 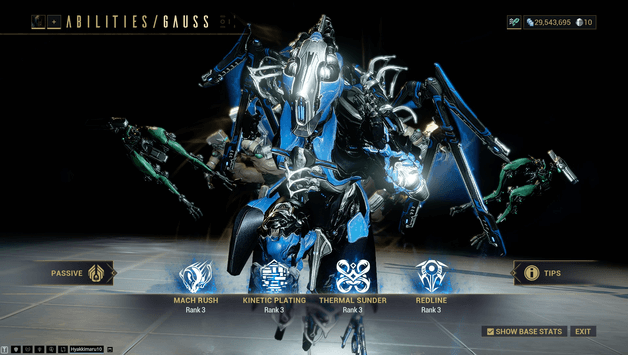 Gauss has the ability to dash towards locations at quick speeds while knocking enemies back, using kinetic energy to create a personal barrier, release cold, heat and blast in an area around him and overload himself with kinetic energy to take on his enemies.

His passive ability, Never Stop Moving, causes Gauss to charge his Speed Gauge when he remains in motion which increases the recharge rate of his shields as well as reduces the recharge delay, both by 80%

His abilities are may consume or be affected by the amount of battery that he has. 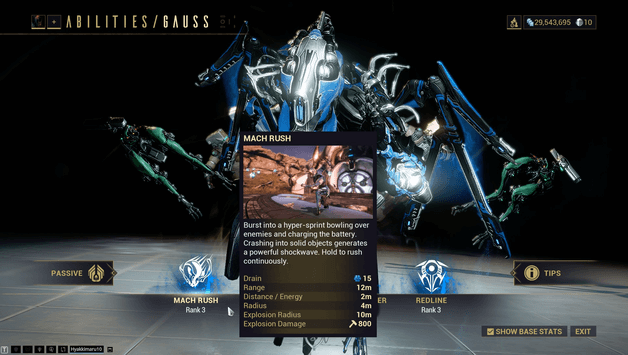 Gauss dashes forwards a small distance or continuously which charges his battery as well as knocks down enemies he passes.

If Gauss crashes into an immobile object that will end his movement, a shockwave is released which damages and knocks enemies back.

Mach Rush helps charge Gauss’ battery allowing him to increase it quickly and using this ability often will maintain a full battery or help replenish it to full capacity.

This ability is great for moving from one point to another as well as knocking enemies in your wake giving you the advantage upon arrival.

It can be used to initiate combat or get out of dangerous situations and even to speed run missions when necessary. 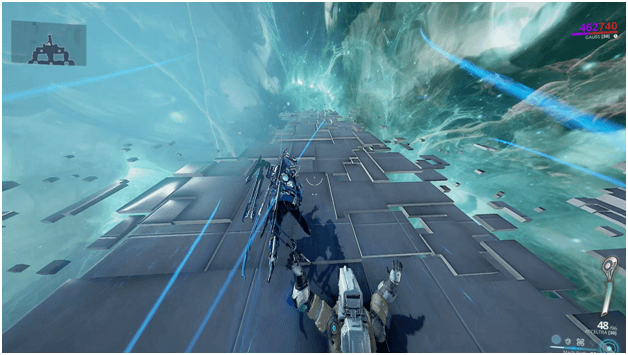 Gauss will quickly dash forward when the ability is held or will continuously run forward until the ability stops or until he collides with a solid object. 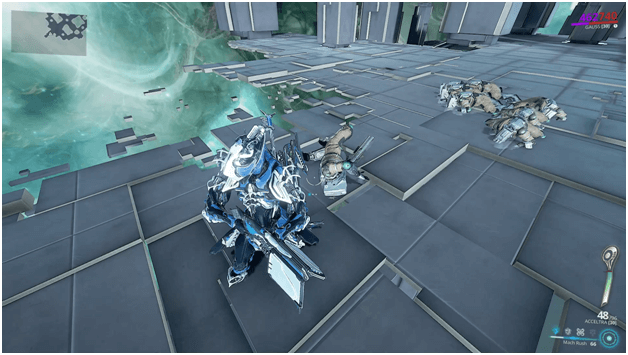 When Gauss using Mach rush, he runs past enemies with such speed that they get knocked down. 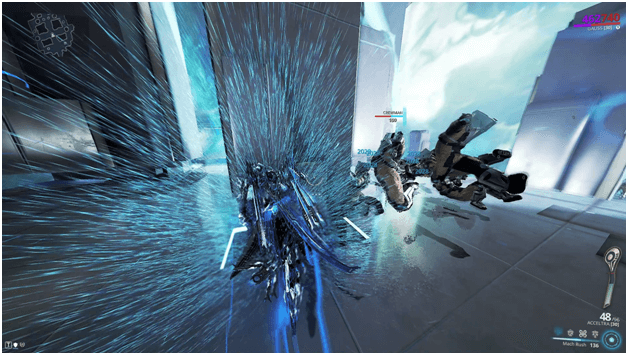 (Shockwave created from colliding into a solid object)

Upon impact of a solid objected, a shockwave is created and enemies nearby are thrown back by the power of the blast. 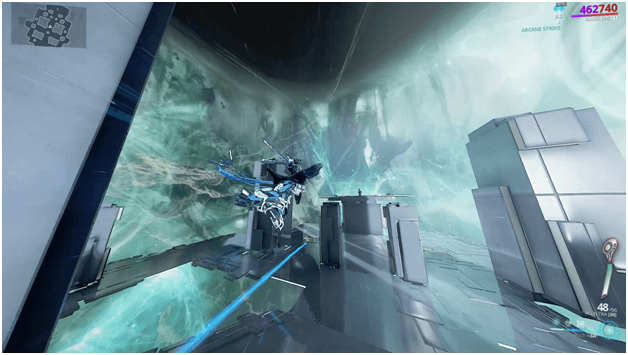 Using Mach Rush while airborne will cause Gauss to dash forward in the air, covering a distance before descending. 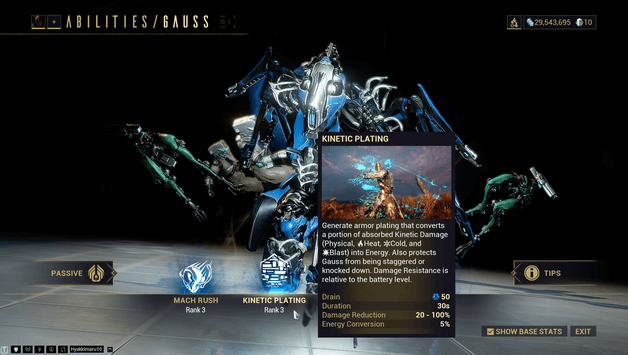 Gauss creates an armor made of Kinetic energy to protect him from physical, heat, cold and blast damage which will also prevent him from being knocked down or being staggered by enemy attacks.

The defense provided by Kinetic Plating depends on the amount of battery that Gauss has, giving him more resistance to damage at higher levels.

Taking hits while Kinetic Plating is active will restore Gauss’ energy based on a percentage of the damage taken.

Using this will provide Gauss with extra protection and make him unstoppable, especially during intense fights.

Kinetic Plating gives a huge boost in survivability as well as provides a good supply of energy for Gauss to use. 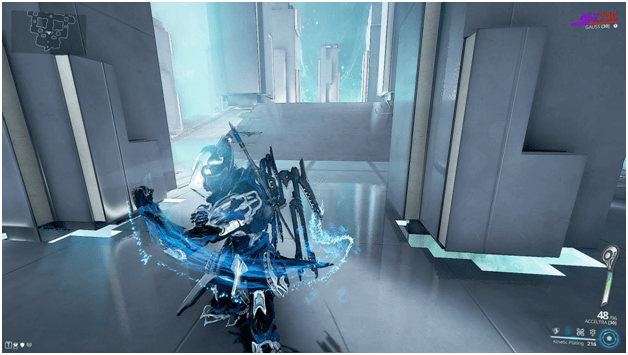 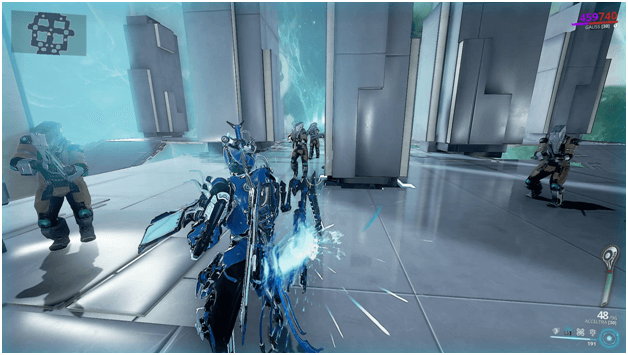 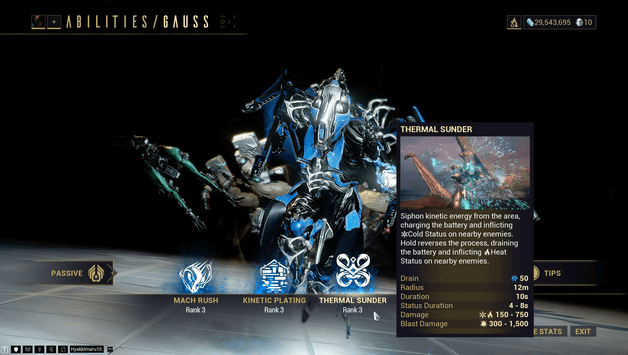 Gauss uses his kinetic energy to force out either cold, heat or a combination of blast damage in an area around him.

These may be combined by toggling each one in any order which will create blast damage in the area around Gauss, sending enemies flying from the power of the blast.

The ability will remain for a certain duration and enemies within the area will take damage over time.

This ability is great for both crowd control, slowing enemies and knocking them back as well as dealing damage to enemies in an area with bonus of having a good damage per second output. 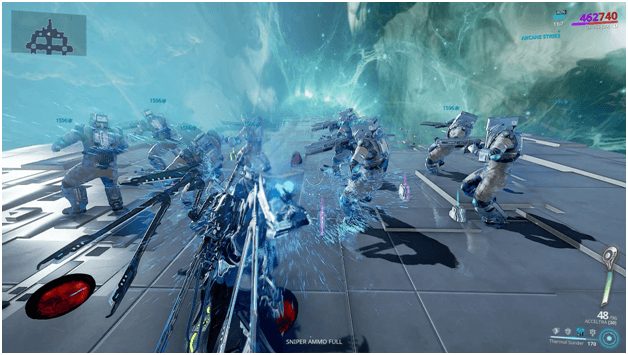 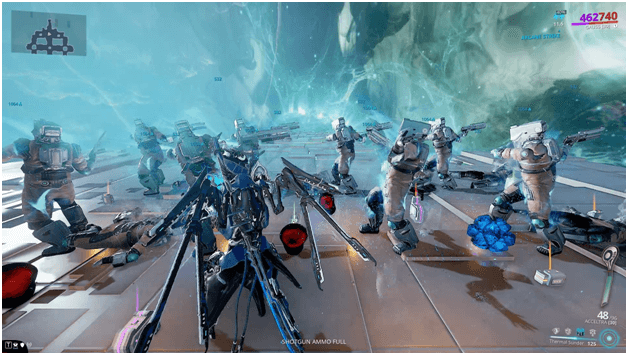 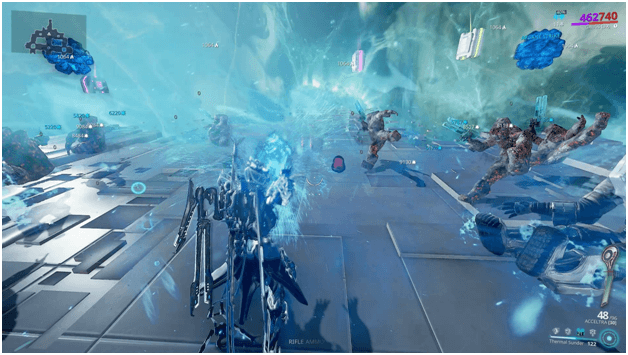 Using either the heat or cold damage in any order and casting each type will cause them to combine, creating blast damage and sending enemies flying back. 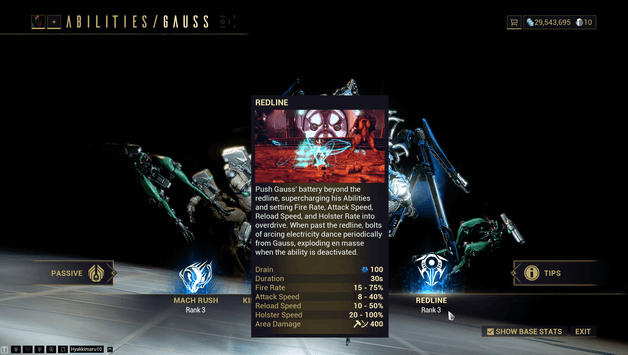 When active, Redline will also allow the battery to go above its capacity, increasing the effects of his abilities as well as the buff from Redline.

During Redline, having a battery capacity beyond its limit will not only improve the effects from abilities but it will also send out arcing bolts of electricity that will damage nearby enemies in an uncontrollable fashion.

Being able to empower Gauss’ Redline become a very essential ability which makes all of his abilities as well as his performance go beyond their peaks giving him a superior edge in combat. 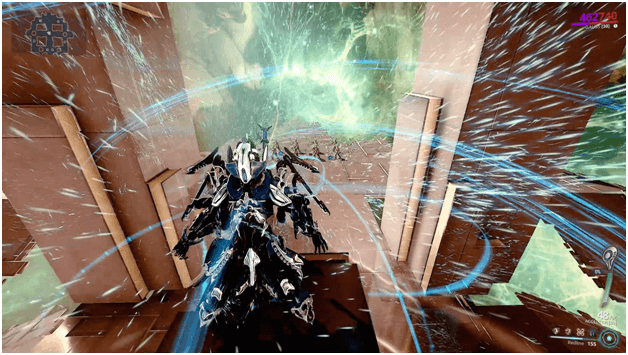 Upon activating the ability Gauss will gain the boost from the ability and will be able to start charging his battery over its capacity. 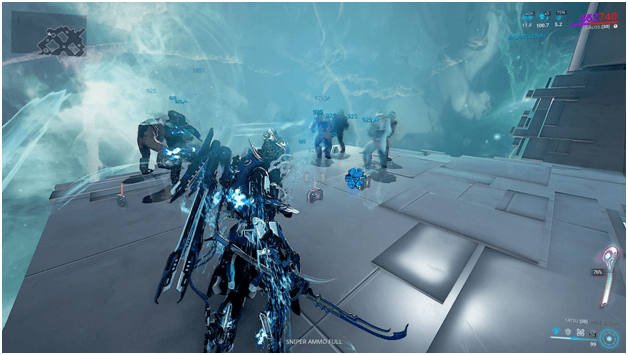 The moment the battery becomes overcharged, arcing bolts will automatically be sent out periodically to damage enemies. 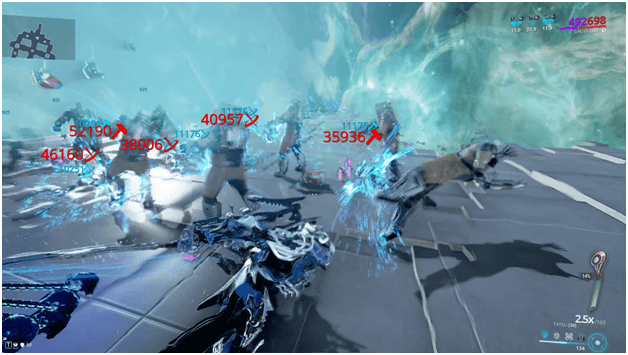 Gauss being very capable in fights due to the immense speed given my Redline, making him even more deadly to any enemy. 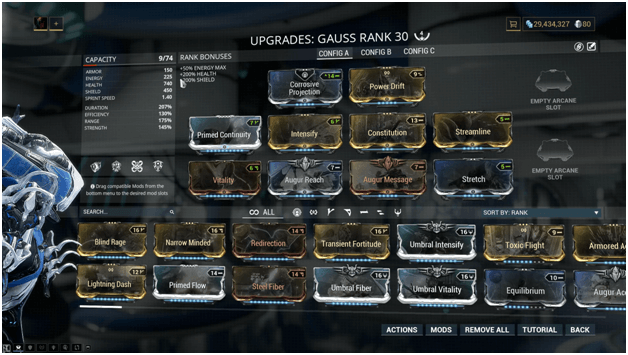 The balanced build for Gauss allows him to utilize all of his abilities with increased effectiveness, providing him with a decent increase in strength, range, efficiency and duration.

This allows him to use all of his skills with a lesser cost in energy while having a slight boost in damage and effects.

Range has been increased to allow his abilities to cover larger areas and his duration has been brought up to approximately double the time on his abilities.

This is a good starter build for those getting to know Gauss’ abilities or for those who want to use a build that is adaptive to certain situations. 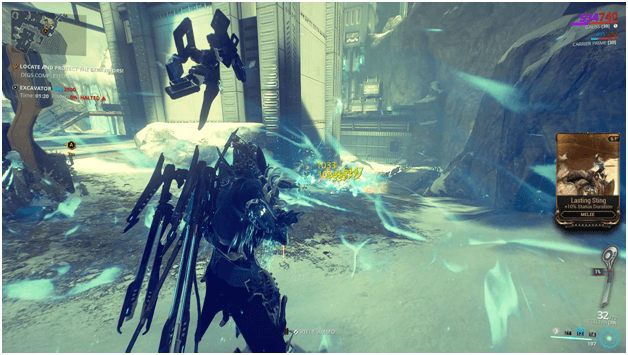 (Gauss using majority of his abilities while fighting enemies) 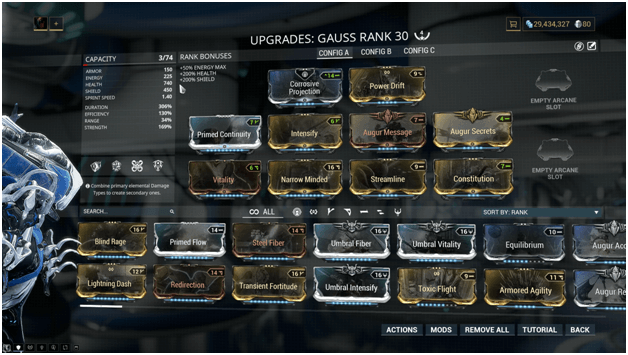 The Redline build which is also more of a duration build focuses on improving the overall effects of the buffs provided by Redline.

With the 306% duration, Redline’s buffs as well as time are improved and increased to 3x their normal time and effects.

This allows Gauss to remain buffed longer with Redline which has stronger effects on all of the affected stats by the ability. 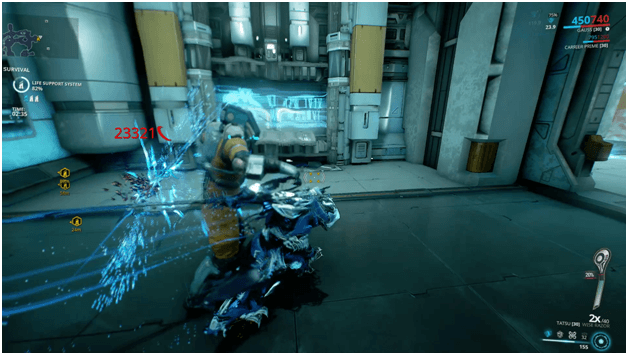 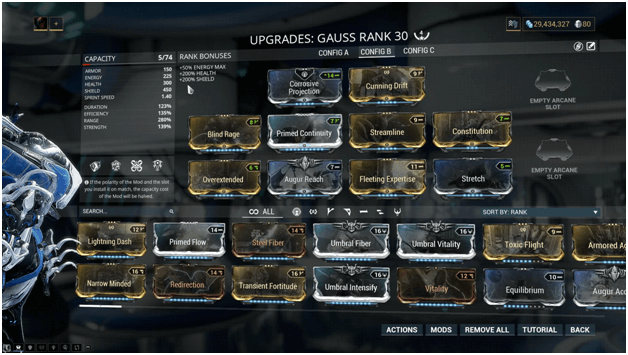 Focusing on range, this build has an increase in stats tilting more towards range to improve the radius of the Thermal Sunder ability and a slight increase in duration to prolong the duration.

This will allow Gauss to use this ability to initial damage as well as damage over time as well as apply crowd control effects to enemies using cold and blast types of this ability.

Efficiency has also been increased to allow the ability to be cast with less energy consumption.

Gauss’ other abilities will also be greatly affected by the increase in range allowing him to affect large areas when dealing with enemies. 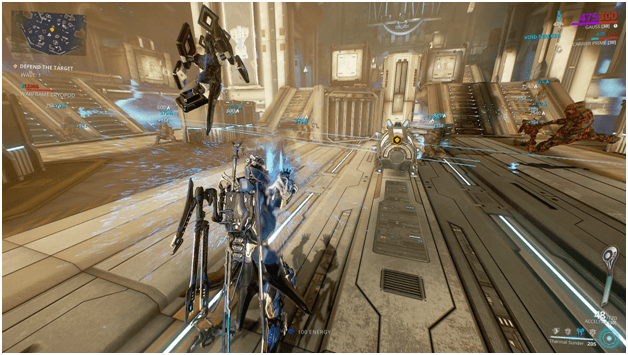 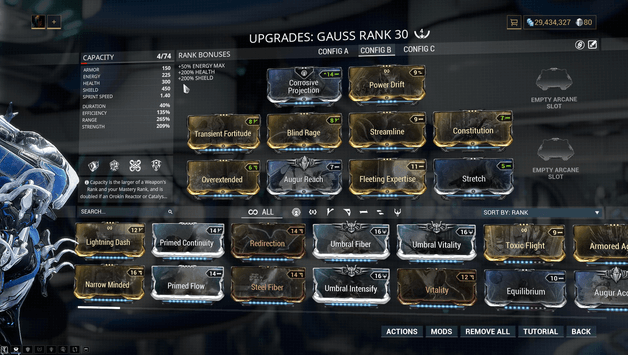 Similar to the previous build, this build focuses a bit more on having range and strength with a reduction to duration.

This allows Gauss to deal more damage initially with a slight amount of damage over time, allowing him to deal instant damage to an area or nuke it.

The abilities will also be affected by having more strength and the loss of duration is made up for by the increased effects of the abilities. 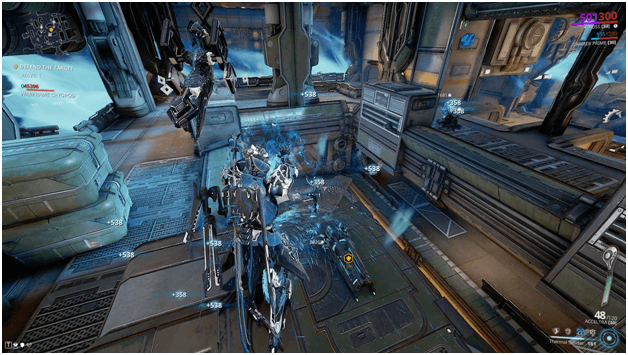 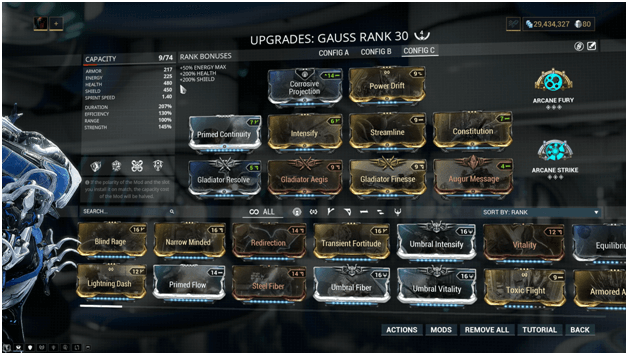 For those who prefer a closer range approach and love to hack and slash at enemies, this build gives a great benefit, mainly for critical melee weapons.

This build adds to the survivability of Gauss as well as the critical chance which can go well with critical builds.

He will still have benefits from his other abilities, being able to use them when needed and having good effects from them as well. 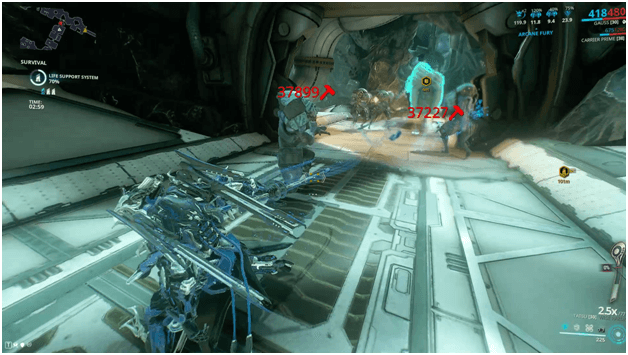 (Gauss killing enemies while under the effects of Redline) 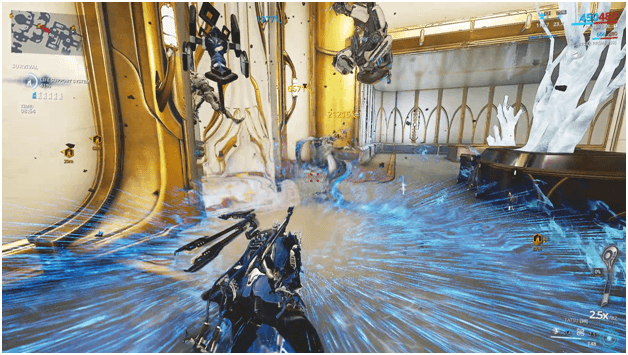 A revolution in kinetic destruction, Gauss is the very definition of speed and power destroying his enemies with great force.

His abilities make it easy for him to move around the battlefield dashing from enemy to enemy and taking them out with ease.

His Mach Rush ability is ideal for moving fast as light, capable of making it easy to rush in and out of battle.

Even with his base stats he is already strong but with the aid of Kinetic Plating he becomes very durable as well as gains a good supply of energy.

His Thermal Sunder ability helps him an achieve a good combination of both crowd control and damage per second when it comes to dealing with multiple enemies.

With Redline he becomes the very manifest of deadly speed, being boosted much beyond his limits.

Gauss is a very powerful Warframe and his speed is only matched by few and with his abilities he definitely one of the strongest and fastest Warframes available.

This speed demon becomes very efficient in battle and in the hands of someone with good skill, strategy and capable of controlling the speed, he becomes unstoppable.