The Rubico Prime is a primary weapon, a cylinder magazine based sniper rifle, it is a Prime variant of the Rubico. 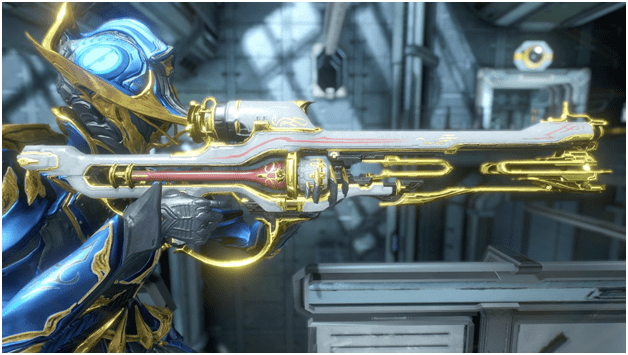 The Rubico Prime is the Prime variant of the Rubico, retaining most of its stats with a few changed as well. 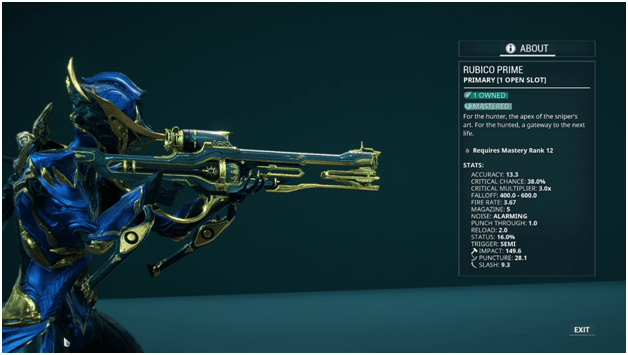 The Rubico Prime has the following base stats:

The Rubico Prime requires a Mastery Rank of 12 before it may be used by players and built using its blueprints and Prime parts.

The Rubico Prime may be crafted with its blueprint and parts which may be obtained by opening relics or by trading with other players. 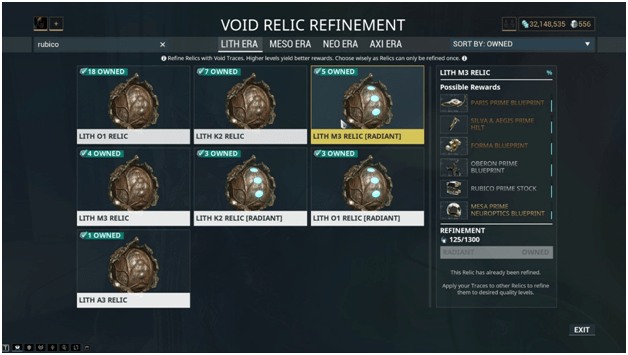 These contain the blueprint and parts required to craft the Rubico Prime:

With its relentless speed and unstoppable firepower, the Rubico Prime dominates enemies at several different ranges.

Being able to deal high amounts of critical damage along with a high chance of landing critical hits with its base critical chance, the Rubico Prime has a passive which gives a higher critical multiple when zoomed in.

It base stats are good to begin with and with some proper modding this weapon can become an enemy’s worst nightmare in the midst of battle. 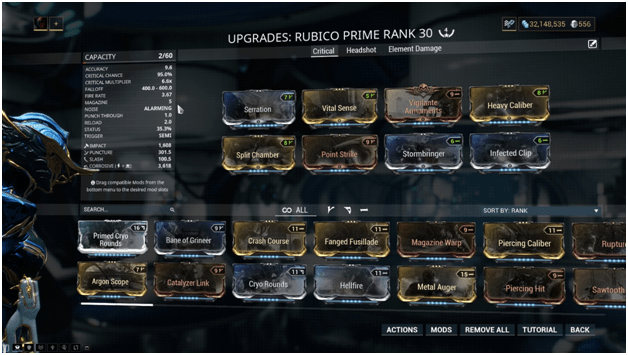 With this build we use Serration and Heavy Caliber for an increase in overall damage, Vital Sense for increased critical multiplier and Point Strike for an better chance to deal critical hits.

Split Chamber and Vigilante Armaments are added for multishot along 2 elemental damage mods.

This build is mainly for dealing high critical damage to enemies, especially with its base critical chance being very high.

Rubico Prime’s passive zoom in ability which gives adds a percentage to its critical damage multiplier making critical hits even deadlier to enemies.

With elemental mods, the damage output of the weapon increases greatly since the elemental damage can deal extra damage to different types of enemies. 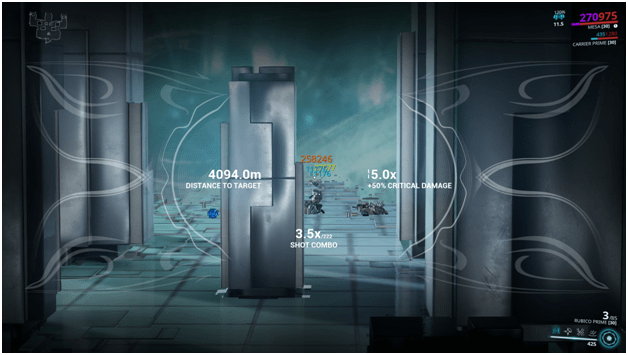 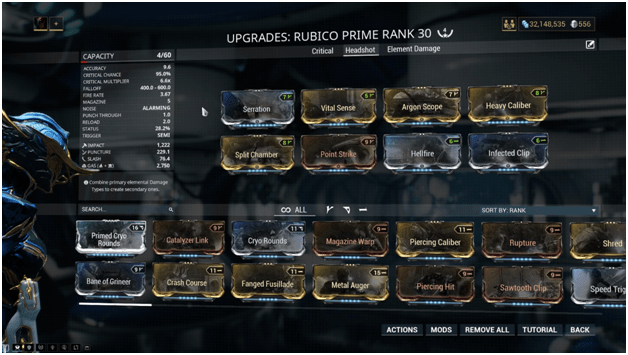 This build is similar to the previous build with the exception of swapping out Vigilante Armaments for Argon Scope in order to further increase the critical chance with headshots.

In addition, since Split Chamber alone only gives 90% chance for a multishot, users may swap this out with another preferred mod.

The main focus of this build is to make use of the Argon Scope mod, dealing a headshot and taking advantage of the buff you receive after.

It is not entirely required to keep dealing headshots, simply shooting an enemy and landing a headshot will trigger the buff and then the user may simply shoot however they like for the remainder of the buff. 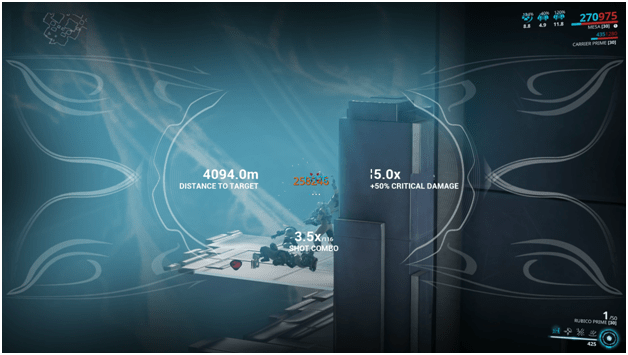 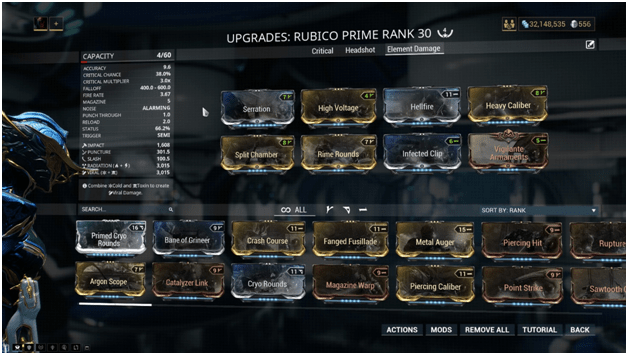 This build is good for dealing large amounts of elemental damage to enemies, exploiting their weaknesses to elements which may be either a combination of 2 or a single element.

This build adds a decent status chance to the weapon, however due to the high critical chance and passive from the zoom, the Rubico Prime will definitely still deal critical hits.

Choosing the right mods to combine can be a key to dealing extra damage to enemies and arranging the mods can choose which element will be used against certain types of enemies.

This build may also be configured into a hybrid for critical damage as well by removing Vigilante Armaments and/or Split Chamber and replacing it/them with Argon Scope and another mod of the user’s choice. 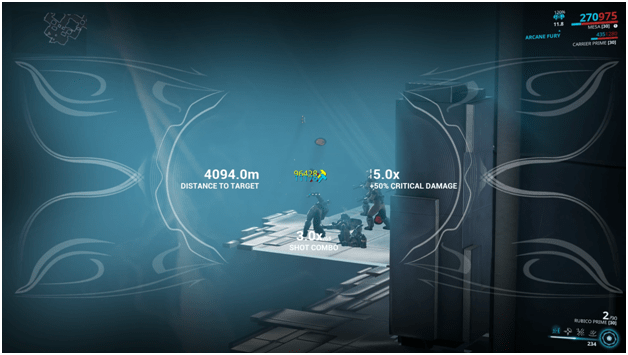 If, Heavy Caliber affects the penalty too much for the user, then they may change it with another mod such as Speed Trigger or any mod of their choice.

These are not the only builds available for the Rubico Prime, but they are pretty useful in many situations.

Looks like a flower, stings like a bee! The Rubico Prime’s is a very elegant weapons seemingly giving us an Orokin feel of a revolver-like sniper rifle.

The handling on the weapons is amazing and the accuracy is comparable to few.

With a decent fire rate and reload speed, the user may continue picking off targets one by one or many at a time when lined up or close together because of the punch through.

Not only does the Rubico Prime have a moderate base damage, but when scaled with elemental mods this goes up to high numbers and is capable of dealing intense amounts of damage.

Due to its high critical chance, it is impossible not to deal critical hits and given the bonus from the sniper rifle combo meter, dealing higher tiers of critical damage because a great possibility.

Its passive zoom in ability will increase the overall critical damage multiplier making it even deadlier the further the user is zoomed in. 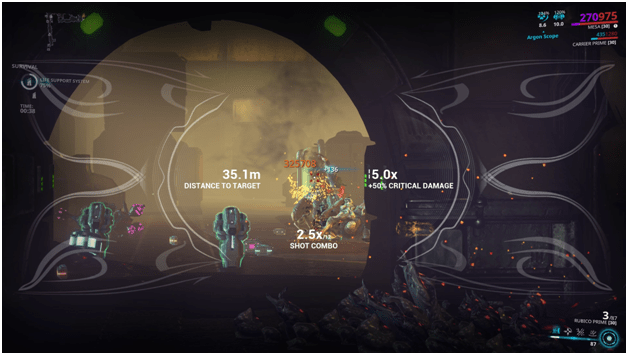