The Sybaris Prime, a primary weapon, is a burst fire lever-action rifle of Tenno design which is capable of dealing good mounts of damage from medium to long range. It fires 2 shots in quick succession with great accuracy.

The Sybaris is the Prime variant of the Sybaris, retaining most of its stats with a few changed as well. 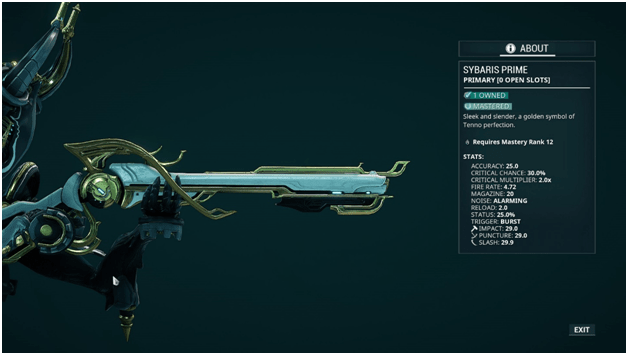 The Sybaris Prime has the following base stats:

The Sybaris Prime requires a Mastery Rank of 12 before it may be used by players and built using its blueprints and Prime parts.

The Sybaris Prime may be crafted with its blueprint and parts which may be obtained by opening relics or by trading with other players. 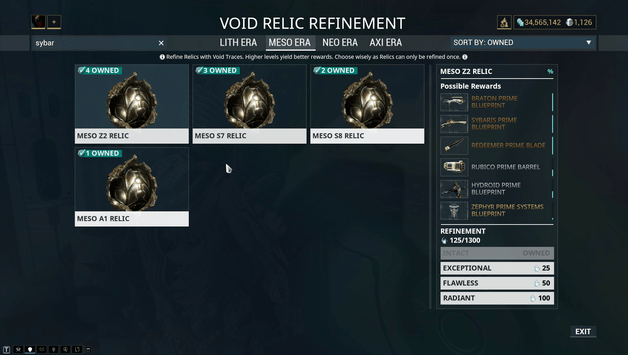 These contain the blueprint and parts required to craft the Sybaris Prime:

The Sybaris Prime is a very precise weapon, capable of dealing bursts of damage in seconds.

With its good range and accuracy, it can be used to pick off enemies at a distance or quickly fired up close.

It has a good balance of physical damage types which can scale up well with different mods. 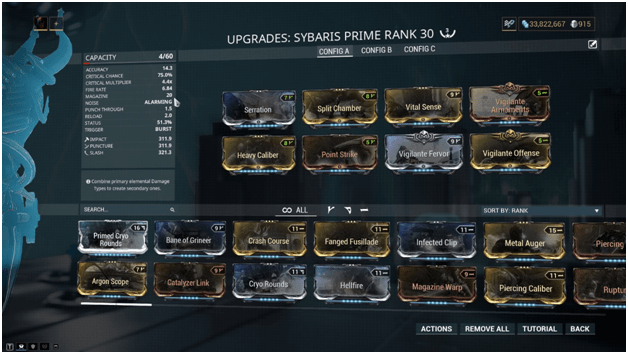 This build uses Serration and Heavy Caliber to increase overall damage along with Split Chamber and Vigilante Armaments to add a for multishot.

For critical properties we have Point Strike increasing the critical chance along with Vital Sense for a higher critical multiplier.

The Vigilante Fervor mod adds an increase to fire rate while Vigilante Offense adds punch through.

The Vigilante mods have a set bonus which give a chance to upgrade the critical tier to a higher level (for example yellow critical to orange critical or orange to red).

This build aims to use the base physical damage types to deal critical damage which has a high chance due to its base damage.

The Vigilante mods will make the critical damage escalate to higher amounts of damage by tier.

The fire rate and punch through help when there are multiple enemies so the Sybaris Prime can fire at a faster speed as well as have penetrating shots. 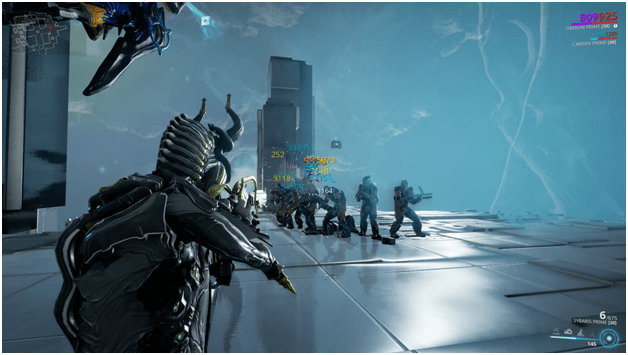 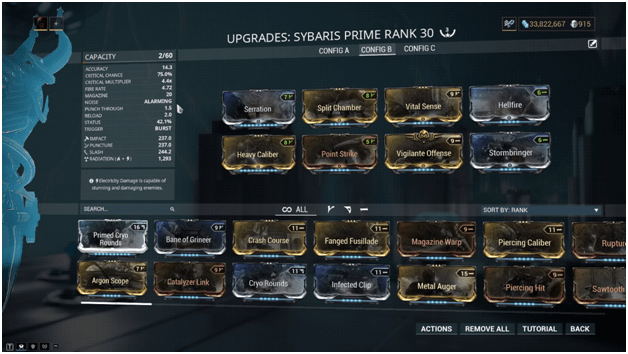 With similarity to our previous build, we exchange a few mods to add 2 elemental damage mods.

This builds main damage comes from a combined element which is meant to deal extra damage to certain types of enemies depending on their weakness.

With this build we aim to focus on dealing critical damage based on our base elemental damage.

The elemental combination is up to the player but it is best to consider the enemy that they will go up. 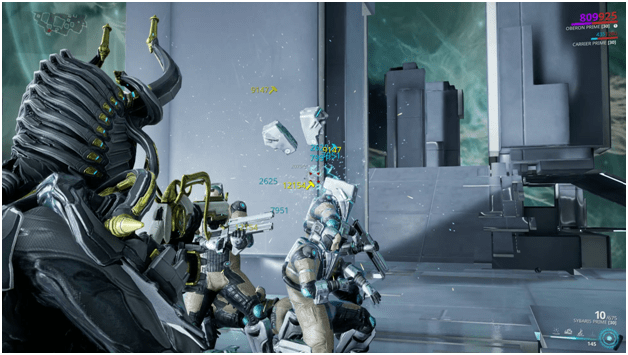 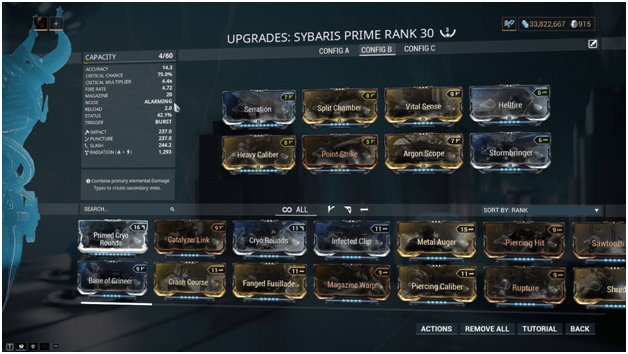 This build retains all the mods from the previous build except for Vigilante Offense, which has been swapped out for Argon Scope.

This gives the user a buff when a headshot occurs which causes additional shots to have a higher critical chance while aiming.

This build focuses mainly on dealing headshots to boost the critical chance and along with the elemental damage. 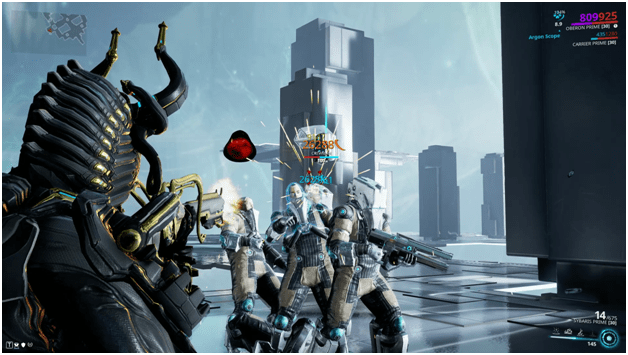 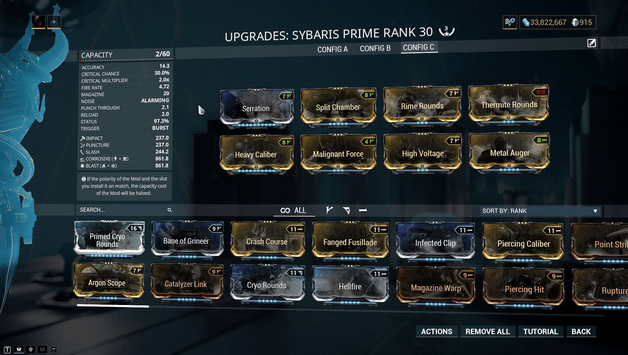 Most of the common mods are kept in this build while the rest have been removed for elemental damage and status mods.

The rest of the build consists of the four elemental damage and status mods being Rime Rounds, Thermite Rounds, Malignant Force and High Voltage.

The aim of this build is to deal elemental damage and to cause status effects on enemies fired upon which may either deal area of effect damage, damage over time or weaken them.D

The Metal Auger mod plays a big part allowing multiple enemies to be effected by the procs of the weapon with punch through.

To change the combined elements, one simply needs to rearrange the four elemental damage and status mods. 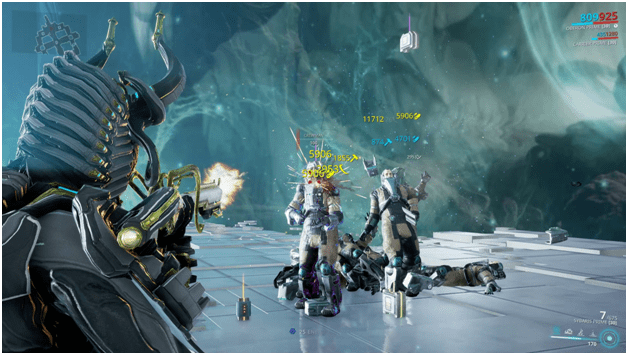 These are not the only builds available for the Sybaris Prime, but they are pretty useful in many situations.

The Sybaris Prime is not only accurate, it is also fast and capable of dealing a good amount of damage.

With its balanced physical damage, there are many possible builds available due to its high critical chance as well as its status chance.

This makes it a very useful weapon in different situations regarding distance from enemies as well as mobility.

With proper modding and a good deal of accuracy, it is possible to utilize the Sybaris Prime to its full. 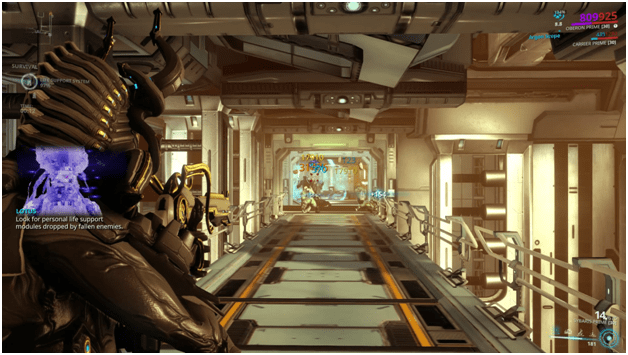