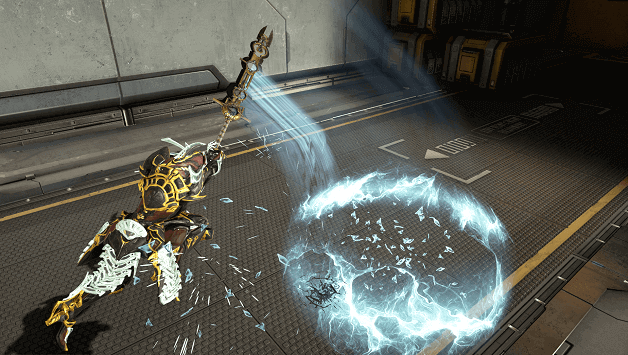 Vitrica was the Heavy Blade that was originally used by Nihil, which was capable of turning foes into glass, making them easy to destroy.

This weapon is capable of turning enemies into glass with a blast that is done while gliding and performing a melee strike while airborne.

Once enemies have been turned to glass, the Vitrica may be used to shatter those enemies with a Slam Attack of any sort.

With a high amount of base damage and a decent range on it, the Vitrica along with its glass ability can make quick work of enemies. 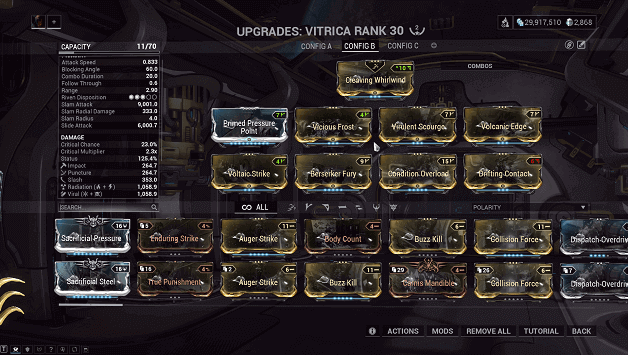 The Vitrica has an insane base Status Chance which can be modded to go over 100% and with this build we hit 125.4% and even added Condition Overload for more chaos.

It only takes a few hits to get enemies inflicted with multiple Status Effects and when Condition Overload comes into play, the more effects, the more damage that is done.

This build is perfect for all enemy levels as the elements can be swapped around and it is guaranteed that Status Effects will proc. 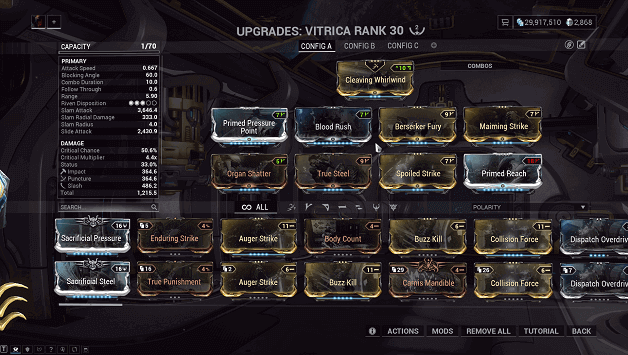 This Critical Build or Maiming Strike build makes use of the 23% Critical Chance of the Vitrica and turns it into 50.06% which is better than most weapons can reach.

With Berserker Fury, we boost our attack speed to make up for the Heavy Blade’s slow attack speed, perfect to get in a lot of strikes to build up for a combo.

As your Combo Meter fills up, the Vitrica will start to deal more and more damage and eventually gain more Critical Chance due to Blood Rush, allowing you to deal critical hits. 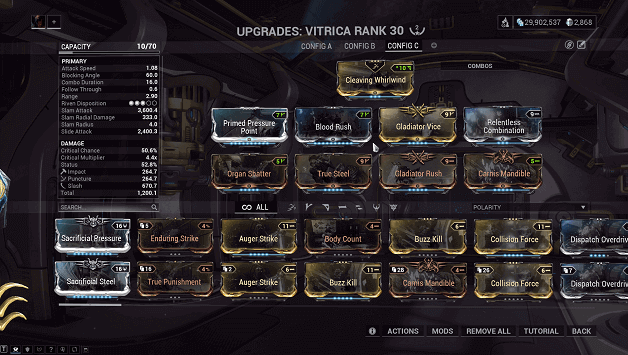 Imagine becoming harder to kill as you take enemies down one by one or many at the same time, this is what the Carnis Mandible Build is meant to do.

Built to increase the Critical Chance of the Vitrica, these mods are meant to help you deal additional damage while you finish things off with Heavy Attacks, especially shattering enemies.

You are most likely to kill enemies with heavy damage or when you shatter them after turning them into glass, which in turn will activate the Carnis Mandible Set Bonus.

The Carnis Mandible along with the other Carnis Set Mods will buff you with Evasion (30% with 3 mods equipped in total) for a short period, allowing you to survive more in a fight.