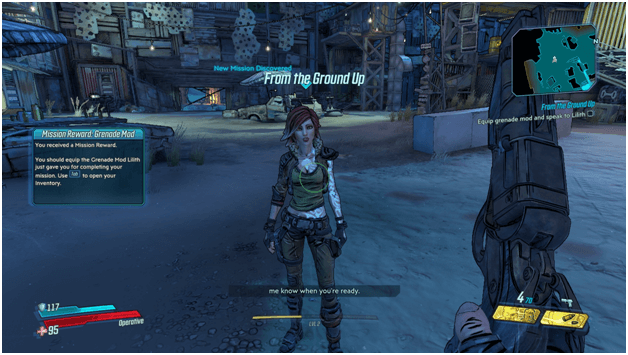 The From The Ground Up serves as follow-up to the previous tutorial and begins to progress to the actual story.

You and Lilith are to secure the propaganda center and begin the search for her lost map which is known to be with the Sun Smashers, resulting in you needing to search for their chief. 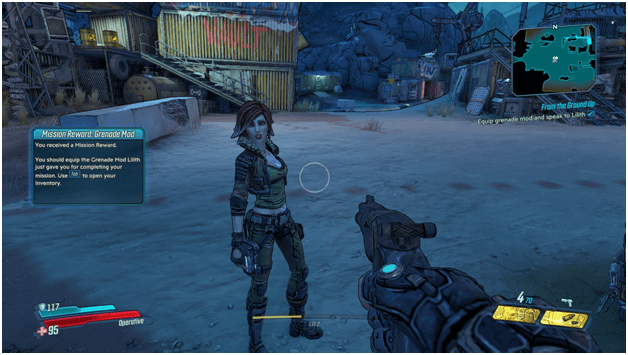 Lilith will instruct you to equip a grenade mod and then speak to her when ready and once you have talked to her, bandits will begin to attack at your location. 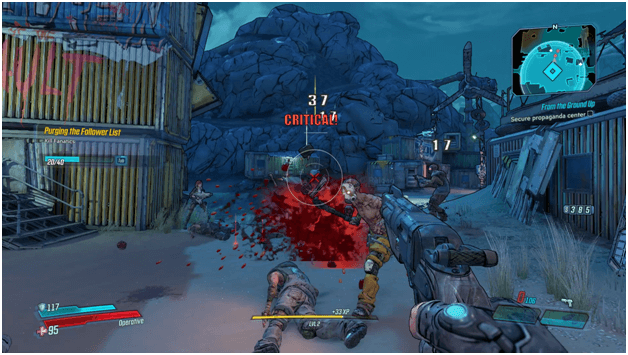 Kill all the bandits that you encounter in the propaganda center and meet up with Lilith to move forwards.

A lot of bandits will be coming so it is wise to use your grenades when they are close together to take them out easily.

Lilith will be fighting alongside you and helping you kill bandits but its best not to rely on her too much as a lot of enemies may still get to you.

Checking Out The Area 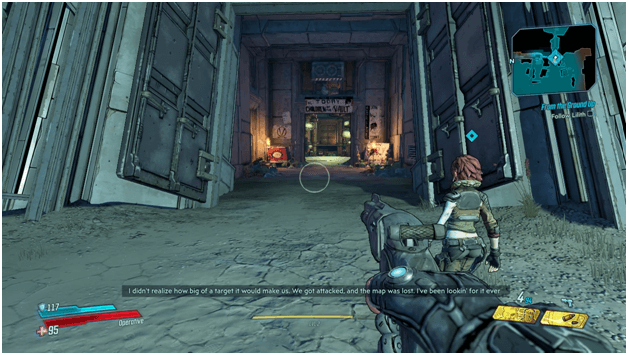 Once all the enemies are cleared out, speak with Lilith and the two of you along with Claptrap will enter the propaganda center to check out the area.

A Message For Shiv 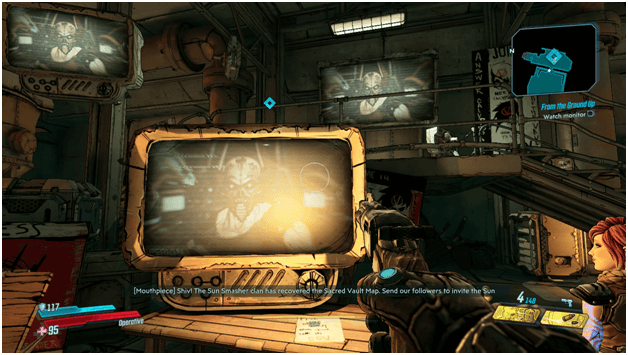 Follow Lilith through the propaganda center until you reach a door where she will phase through and unlock from the other side.

This will open up the way to Shiv’s Sanctum where you and Lilith will intercept a message that was made for Shiv regarding the map to a vault that Lilith is searching for.

The transmission is from Mouthpiece, a boss you will encounter later on who claims that the Sun Smashers have found the vault map.

Lilith then instructs you to head out and search for the Sun Smasher chief to investigate if they still have the map piece.

Heading To The Droughts 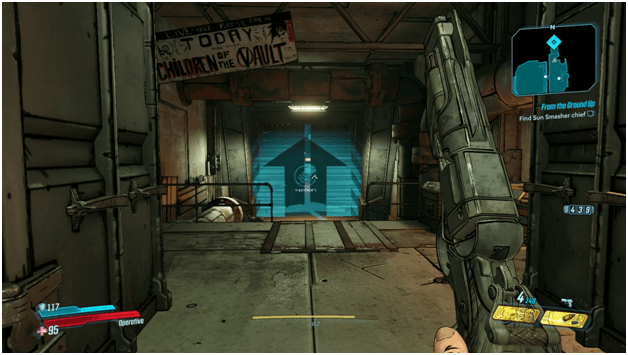 Lilith will open up the gates which leads to The Droughts which will be the main place where you and the Crimson Raiders will be staying and operating from.

Proceed towards the location that was opened and interact with the end of the area to move to the next one.

Going To The Sun Smashers Camp 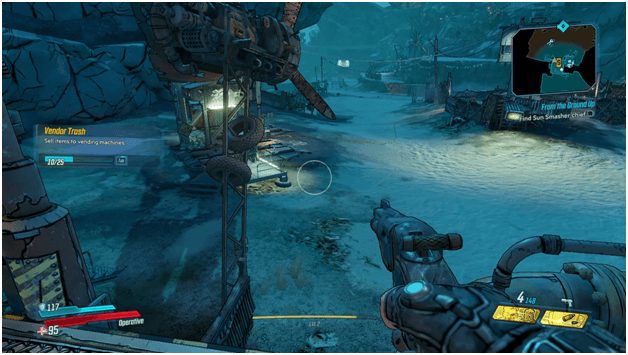 You will end up in an outpost where there are vending machines as well as a lot of loot containers that may provide you with either weapons, ammo, cash and more.

Loot what you can and head off to find the Sun Smasher chief whose location is now supposedly marked on your map.

The location of the Sun Smasher camp is pretty much a fair running distance from the propaganda center and you can easy reach it in a minute or less. 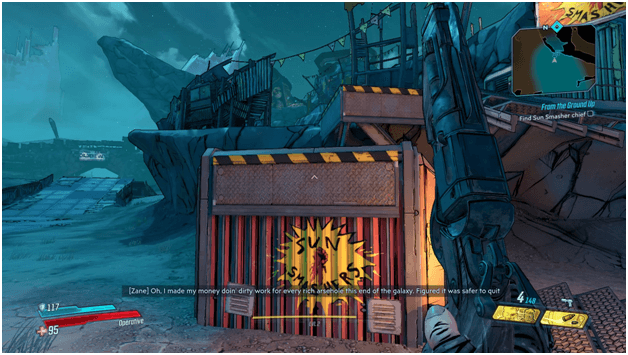 Head up near their entrance by jumping up onto some containers and onto a ledge and prepare for a fight.

The level of the enemies here may be a bit high so if you experience difficulty, you can instead head for doing some side missions first. 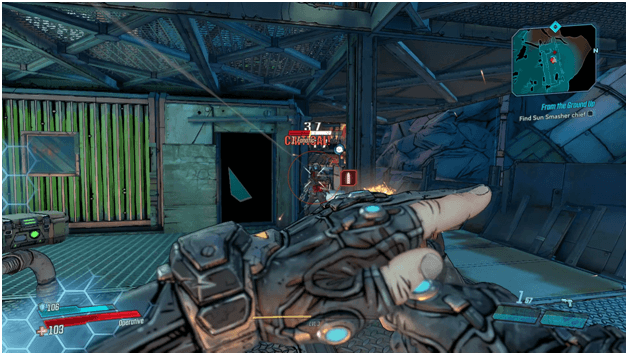 Continue to fight your way towards the waypoint and clear out any enemies so later on you won’t have to fight them once you reach the Sun Smasher chief. 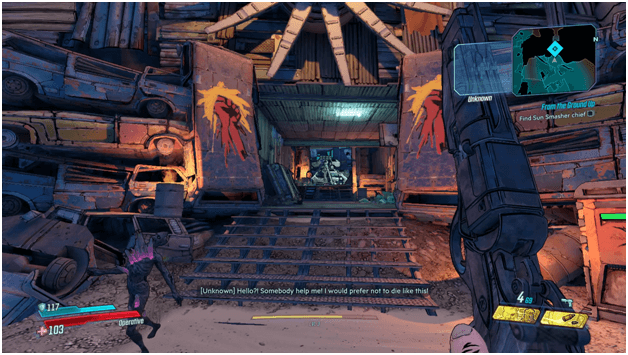 Once you clear up the enemies and head towards the waypoint you will come across the bandit leader of the Sun Smashers who is tied up and shouting for help. 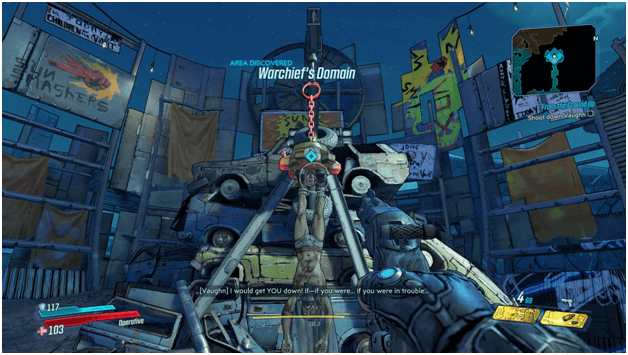 As you approach the Sun Smashers war chief, later known as Vaughn, you will need to shoot him down to release him.

Shoot the red part of where Vaughn is tied to release him, causing him to fall to the ground and approach him to talk with him to proceed.

Be sure to check the container located on top of the pile of cars behind where he is tied up as it may have items that may be worth taking.

Heading Back With Vaughn 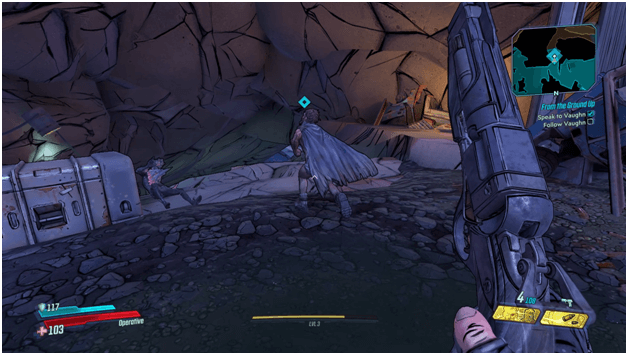 After speaking with Vaughn, the two of you will head back to the propaganda center to report back to Lilith.

Vaughn will pretty much lead the way and attempt to jump down and lead you to a shortcut which is suppose to get you back faster. 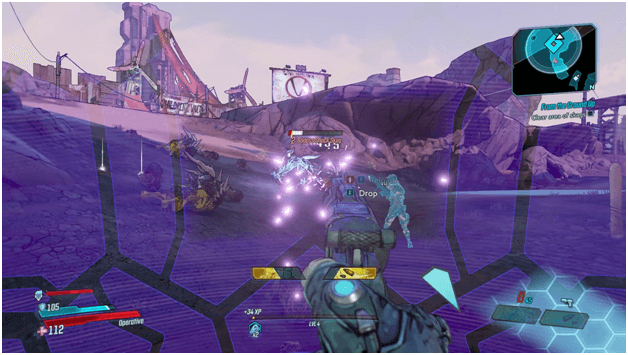 You and Vaughn will pass by a skag den and he tells you that he will lay back while you take care of the skag den.

Vaughn will mention that the only thing he is packing is not something that he is going to use on a skag and since he is just in his underwear and wearing a cape, you can probably guess what he means. 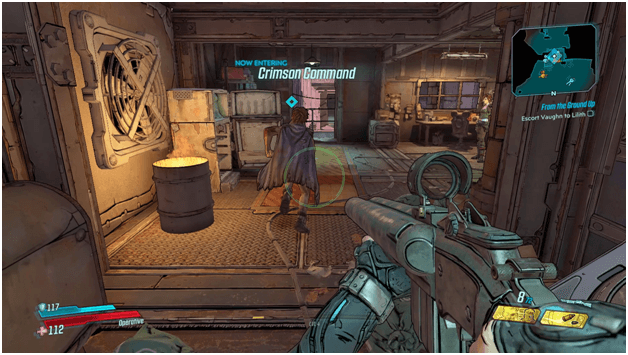 Once the two of you reach Lilith, the two will have a quick conversation and the mission will be completed.

After completing this mission, the Cult Following mission will be received.

From The Ground Up Mission Rewards 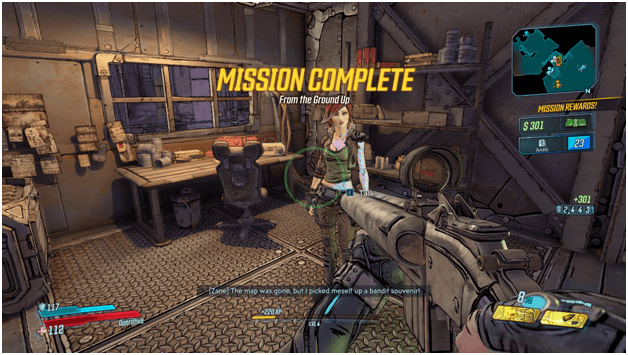 Completing the From The Ground Upmission will grant you around 301 Cash and a Rare outfit which you can equip at a Quick-Change. 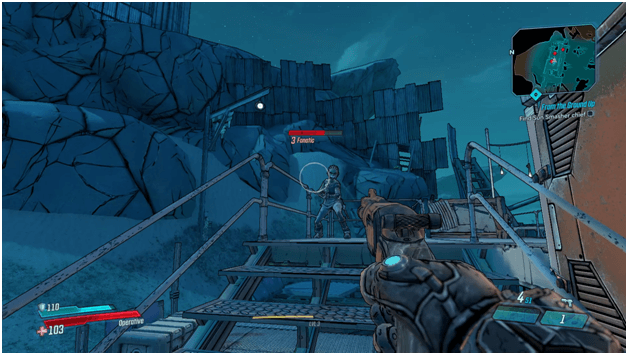