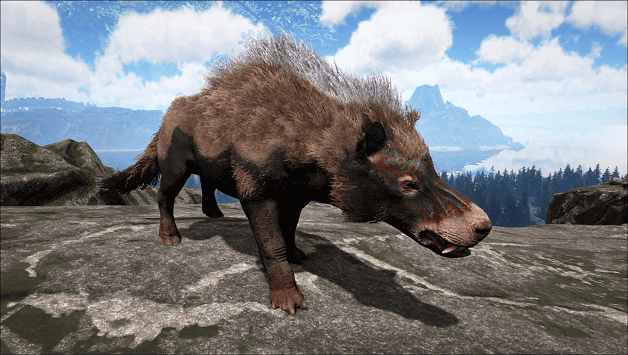 The Andrewsarchus is one of the more reserved creatures that seem to be quite territorial and have been found lately on the Fjordur map.

These mammals can be found foraging peacefully but will attempt to attack players who tend to get too close to their small range of aggression.

Once tamed though, these creatures offer a ton of benefits such as transportation, attack mounts, and even assault thanks to the Andrewsarchus Saddle. 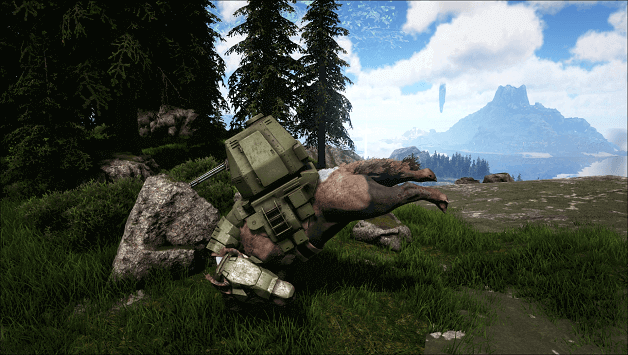 The Andrewsarchus lowers its head and releases a powerful hind kick that knocks back enemies that are hit from a fair distance.

This can be well-positioned easily when the Andrewsarchus drifts or if an enemy is chasing you and ends up right behind your mount.

The hind kick has a good amount of range and can be used to keep enemies away from the Andrewsarchus or even push them continuously.

Using Charge will make the Andrewsarchus start dashing faster and will cause it to destroy trees and rocks that it collides with.

This will allow you to easily get through areas without the Andrewsarchus collecting any resources and becoming overburdened.

Charge can be used (has a cooldown) to clear areas or to escape and even catch up to enemies depending on the situation.

This will activate turret mode, which allows you to aim and fire the minigun that is attached to the Andrewsarchus Saddle.

You may fire the minigun as long as the Andrewsarchus has Advanced Rifle Bullets in its inventory and may do so even while moving.

Being able to fire and move at the same time offers a lot of advantages when fighting enemies, whether you are attacking or escaping.

The minigun can be fired using the following:

The Andrewsarchus Saddle is equipped with a minigun which players can use while riding, allowing them to shoot enemies, even while moving.

Getting around the map is easy thanks to the Andrewsarchus’ speed along with its charge to get through obstacles blocking its path and its ability to jump.

An Andrewsarchus is perfect for escorting other allies since it can easily move around and cover the area for them with its minigun.

Being able to get around quickly and having a minigun for protection makes the Andrewsarchus a good means of transport for players. 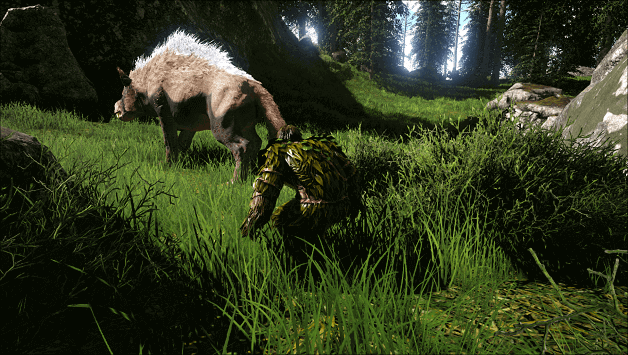 The Andrewsarchus is a passive tame and requires that you feed it Giant Bee Honey first before you can begin the taming process.

You will need to have a good amount of Giant Bee Honey before you begin to prepare some and make sure you set up a bed nearby just in case you get killed.

Toss the Giant Bee Honey on the ground and wait for the Andrewsarchus to eat it, which will give you enough time to run up to it and ride it.

Once riding it you will need to press and hold the left or right arrows (taming process goes up with correct keys being held) as it runs in random directions.

A rage bar will be shown (displaying taming effectiveness as well) and you will need to jump off before it is full or you will be kicked off and stunned.

The Andrewsarchus will be tamed once the taming bar reaches 100%.

While the taming method for the Andrewsarchus requires you to drop Giant Bee Honey near it, you will only need to feed it berries or vegetables afterward.

Also read below how to get berries in ark 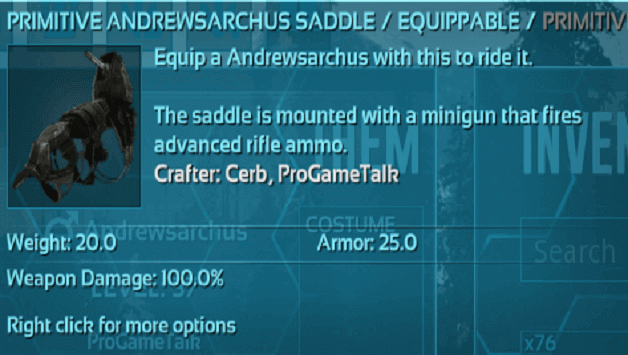 The Andrewsarchus Saddle seats its rider on the right side, most likely for safety from its modes and to provide better vision when aiming.

It is possible for two Andrewsarchus of the opposite gender to breed, allowing the female to give birth to a Baby Andrewsarchus.

Gestation of the baby Andrewsarchus takes around 33 minutes.

You can find the Andrewsarchus spawning roughly around the following locations on the Ark Fjordur map. 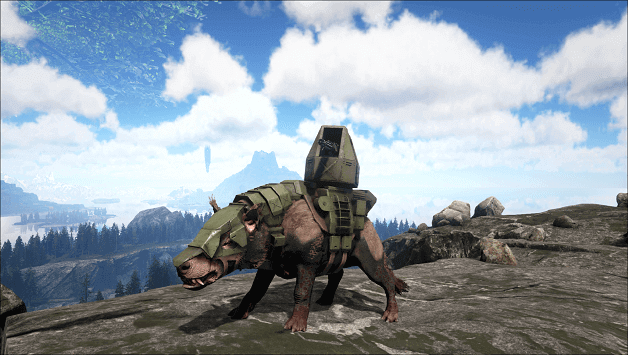 The Andrewsarchus can be quite aggressive and dangerous to early game players, so beware because it is difficult to outrun.

This creature is useful for both the early game and later on due to its ability to travel the map easily and its assault capabilities.

While the Andrewsarchus may require some time to tame, it is worth it later on, especially when you can fire that minigun at enemies.