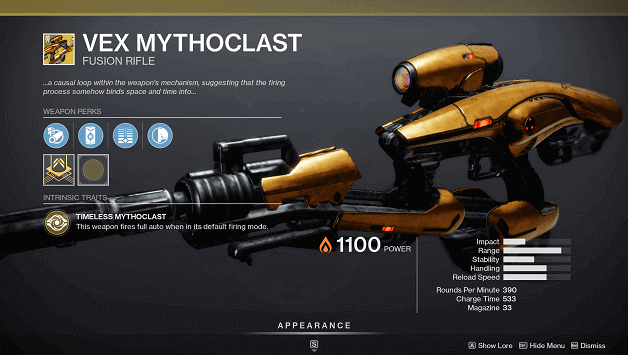 …a causal loop within the weapon’s mechanism, suggesting that firing process somehow binds space and time into…

The Vex Mythoclast is an overcharging Exotic Fusion Rifle that is capable of building up power before unleashing devastating projectiles.

This weapon can fire 390 rounds per minute and has a charge time of 533 along with a magazine that holds 33 rounds.

Defeating targets with this Exotic Fusion Rifle builds stacks of overcharge which later allow you to swap into a different powerful fire mode.

How To Get Vex Mythoclast?

The Vex Mythoclast can be obtained as a reward drop from the Vault of Glass raid, it is obtainable by chance after completing it.

You may obtain the Vex Mythoclast after the first encounter in the Vault of Glass after defeating Atheon, giving it a chance to drop from the loot pool.

The Vex Mythoclast is equipped with a lightly vented barrel.

The battery of the Vex Mythoclast exists in multiple timelines, causing it to Overcharge.

The Vex Mythoclast is optimized for recoil control

The Vex Mythoclast fires full auto when it is in its default firing mode, allowing you to quickly build stacks to prepare for its overcharged alternate firing mode.

Once in its overcharged mode, the Temporal Unlimiter trait will be active, allowing the Vex Mythoclas to charge up to fire powerful linear fusion shots.

How To Get Vex Mythoclast Catalyst?

The Vex Mythoclast Catalyst provides the Exotic Fusion Rifle with the Calculated Balance perk, which grants increased stability with higher stacks of overcharge.

This makes it easier for you to stay focused on your targets with less penalty when firing at your enemies.

The Vex Mythoclast Catalyst can be obtained by completing a puzzle during the Vault of Glass raid.

You can unlock the upgrade by defeating 700 enemies with the Vex Mythoclast.

A good way to make use of the Vex Mythoclast is to gain stacks of overcharge fast by defeating enemies, supposedly done quickly with precision hits.

Since you can use the full-auto firing mode which is the default firing mode, this can make it easy to build up overcharge.

You can use the overcharged firing mode to take out remaining enemies or use it when the situation calls for it.