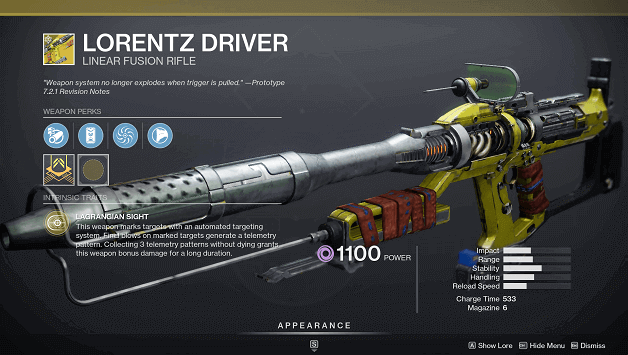 The Lorentz Driver is an extremely dangerous Exotic Fusion Rifle that is capable of killing most enemies with a single hit.

This weapon has a charge time of 533 before unleashing a deadly blast and has a magazine capacity of 6 rounds.

Due to the weapon’s EM Anomaly perk, the Lorentz Driver is capable of devastating several enemies in the blink of an eye in both PVE and PVP.

How To Get Lorentz Driver?

The Lorentz Driver is the seasonal weapon of Season of the Splicer (Season 15) and will be available as a reward when you progress with the Seasonal Rank.

Once Season 15 is no longer active, the Lorentz Driver will be available from the Monument to Lost Lights for a certain amount of resources.

The Lorentz Driver is equipped with a lightly vented barrel.

A precision final blow with this weapon creates an implosion that pulls in nearby targets and damages them with an additional detonation.

The Lorentz Driver has a versatile dual-purpose stock.

Collecting 3 telemetry patterns without dying grants this weapon bonus damage for a long duration, allowing you to kill enemies faster.

This works exceptionally well with the EM Anomaly trait, which causes precision blows to create an implosion that pulls and damages enemies.

Being able to kill enemies easily with precision hits can cause several implosions which can take out groups of enemies in seconds.

How To Get Lorentz Driver Catalyst?

The Lorentz Driver Catalyst provides the Exotic Linear Fusion Rifle with the Jump Driver perk, providing it with an enhanced radar and improving EM Anomaly.

This makes the Lorentz Driver extremely deadly as all of its attacks will cause implosions and make this weapon devastating to groups of enemies.

You may obtain the Lorentz Driver Catalyst by completing the “REVISION 7.2.2” quest which is obtained from Banshee-44.

Once you have the Lorentz Driver Catalyst, you will need to unlock it by defeating 400 enemies using the Exotic Linear Fusion Rifle.

The Lorentz Driver is capable of unleashing a powerful shot that can enemies instantly with a well-placed precision hit, even when firing at Guardians.

Aside from its powerful damage, this Exotic Linear Fusion Rifle has its EM Anomaly trait which creates a miniature black hole that damages and pulls enemies.

A great technique when fighting enemies or even Guardians would be to deal a precision hit for EM Anomaly to activate and afterward deal precision shots to everyone else.