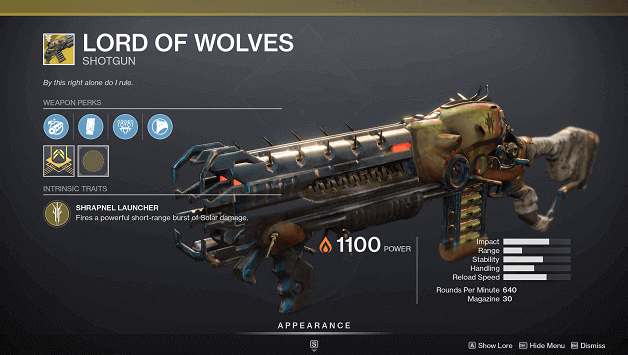 By this right alone do I rule.

Lord of Wolves is an intense Exotic Shotgun that deals an extremely large amount of damage when used up close during combat.

This Exotic Shotgun is capable of releasing up to 640 rounds per minute and has a magazine that holds 30 rounds.

Known for its Solar Bursts, the Lord of Wolves heavy damage when you fire it close to enemies and can activate its Release the Wolves perk.

How To Get Lord of Wolves?

The Lord of Wolves can be obtained by completing bounties that you can get from The Spider which gives a chance to obtain the Exotic Shotgun.

There is a chance to obtain the Exotic Shotgun from a bounty from Spider, but this is random and will require grinding to get it.

Although rare, there is a small chance to obtain Lorde of Wolves as a random drop when doing PVE activities.

The Lord of Wolves has a stable barrel attachment.

The lord of Wolves has a greatly increased magazine size but slower reload speed.

Press reload to swap to a longer, more powerful burst.

The Lord of Wolves has a versatile dual-purpose stock.

Fires a powerful short-range burst of Solar damage, making it release multiple projectiles per shot to deal a lot of damage.

This makes the Exotic Shotgun have burst-fire features which do excellent damage when fired at close range.

With the Release the Wolves trait, you can swap to a more powerful burst, whichever is more convenient in your situation.

How To Get Lord of Wolves Catalyst?

The Fang and Claw perk is obtained when you unlock the Lord of Wolves Catalyst, providing the Exotic Shotgun with increased reload speed while Release the Wolves is active.

When Release the Wolves is not active, Lorde of Wolves has increased stability instead of increased reload speed.

Lord of Wolves is unique in its way, having a burst fire mechanic that lets out Solar projectiles but there is more to it than meets the eye.

Activating Release the Wolves provides a longer burst which will deal more damage and also at to the Exotic Shotgun’s reload speed.

When Lord of Wolves does not have its perk activated, it has more stability which makes it good for firing on the move, allowing you to choose between situations.