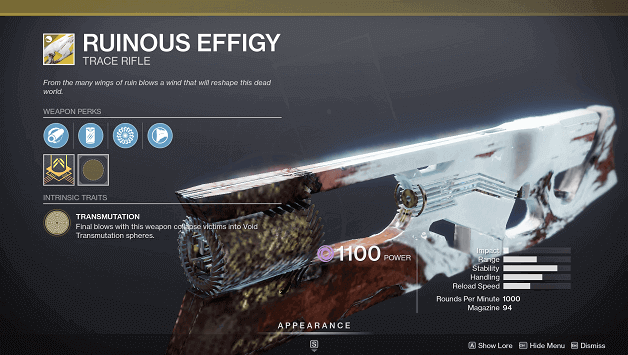 From the many wings of ruin blows a wind that will reshape this dead world.

The Ruinous Effigy is an Exotic Trace Rifle that is capable of transmuting enemies into destructive void energies.

This Exotic Trace Rifle is capable of firing 1000 rounds per minute with a magazine that holds 94 rounds before the need to reload.

Enemies destroyed by this weapon are transformed into Void Transmutation Spheres which players can pick up and use.

How To Get Ruinous Effigy?

The Ruinous Effigy used to be a reward from a quest that involved the Prismatic Recaster which allowed you to do its quest.

There is no longer a quest needed for the Ruinous Effigy and you can instead obtain this Exotic Trace Rifle by purchasing it from the Monument to Lost Lights.

The following are needed to purchase Ruinous Effigy:

The Ruinous Effigy has a durable ranged barrel.

Constrains recoil for every bolt.

The transmutation spheres you create can be picked up and wielded as weapons by you or your allies.

Final blows with the Ruinous Effigy collapse victims into Void Transmutation Sphere, which may be picked up by allies and used as weapons.

The Evolution trait allows the spheres to be picked up and allow them to be used as weapons by those wielding them.

How To Get Ruinous Effigy Catalyst?

To upgrade the Ruinous Effigy you will have to kill 5000 enemies with the Exotic Trace Rifle or with its Transmutation Spheres.

This Exotic Trace Rifle has a rather unique trait that provides you and your allies with an additional weapon to use.

Since other players can grab the Transmutation Orbs, the Ruinous Effigy seems to be a supportive weapon as well as a destructive one.

If players tend to use the Transmutation orbs, the Ruinous Effigy becomes even more useful with the help of its catalyst’s upgrade.