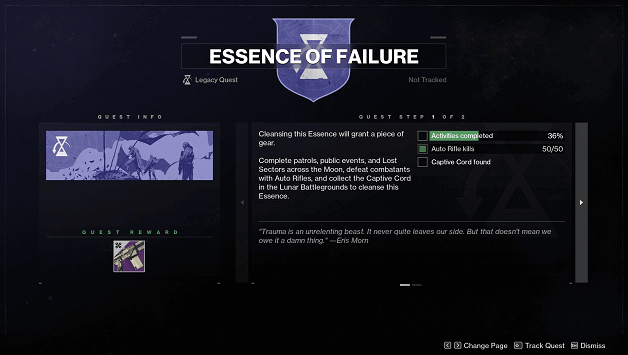 The Essence of Failure is a quest that focuses on the usage of Auto Rifles and completing a certain percentage of activities.

Once players have completed this quest, they will be able to use the Lectern of Enchantment to obtain a new type of Auto Rifle.

How To Get Essence of Failure Quest?

Unlike other essence quests, players may obtain the Essence of Failure quest by defeating stronger enemies, mainly those with yellow health bars.

The Altar of Sorrows is a good way to get this quest since there are many Nightmare enemies present during that event.

For the Essence of Failure, you will need to participate in activities as well as defeat 50 enemies with an Auto Rifle.

Additionally, you will need to find the Captive Cord, which is located in the Lunar Battlegrounds, which is can be found going around the right of Sorrow’s Harbor.

As you continue to the right of Sorrow’s Harbor, there will be a bridge and you will simply need to keep going until you find a structure with a large satellite tower appearance.

Once near, there will be a waypoint (track the quest) that will pinpoint the location of the Captive Cord, which you will need to pick up.

After completing the required objectives, make your way back to the Sanctuary and interact with the Lectern of Enchantment.

You will be able to obtain the Legendary Auto Rifle and the quest will be complete. 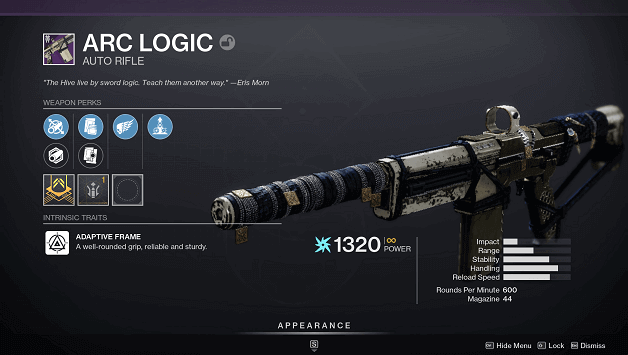 Completing this quest will reward you with the Arc Logic Legendary Auto Rifle, a Lectern Auto Rifle that fires rapid Arc shots.