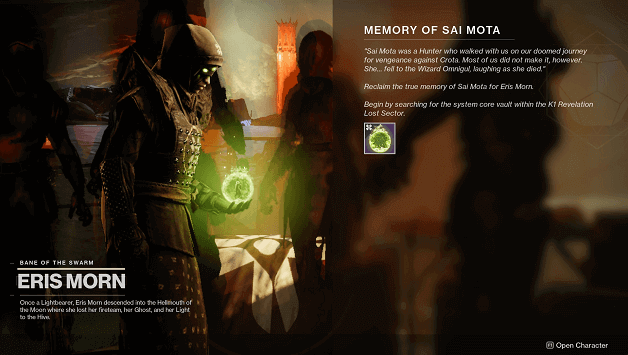 Eris Morn seeks the memory of one of her lost fireteam members who fought alongside her and died at the hands of the Wizard Omnigul.

Your task is to help Eris Morn find and reclaim the memory of Sai Mota, which comes in the form of a necklace by venturing into the Lost Sectors.

How To Get Memory of Sai Mota Quest?

Along with other quests, you will be able to receive the Memory of Sai Mota quest once you have neared the completion of the Legacy: Shadowkeep campaign. 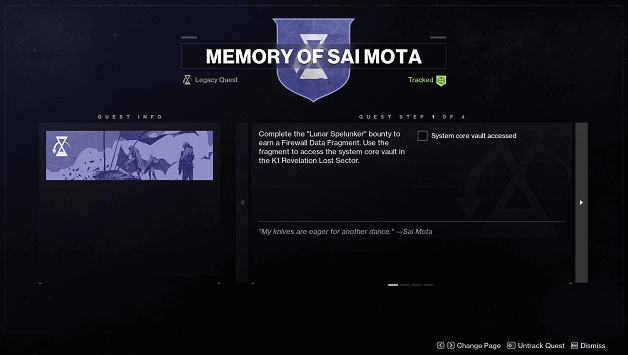 You will need to access the system core vault which is located in K1 Revelation to the right side on a broken platform where you fight the Lost Sector boss.

In order to gain access to the system core, you will need a Firewall Data Fragment first, which is obtained by completing the Lunar Spelunker Bounty.

You may obtain the Lunar Spelunker bounty from Eris Morn.

Once you have accessed the system core at K1 Revelation, your next task is to collect 20 Necklace Scraps, which is done by defeating Nightmare enemies with Arc abilities.

You do not necessarily have to deal the last hit with your Arc abilities but you will need to deal damage to some extent.

A good way to complete this is to participate in the Altar of Sorrows event as there are several Nightmare enemies present.

You need to collect a total of 20 Necklace Scraps.

Once you have collected all of the Necklace Scraps, head back to Sanctuary and enter the portal to where Eris Morn is located.

She will be at the end and will confront the ghost-like beings around her and you will then give her your findings, prompting her to reward you with a chest.

To complete the quest, you will need to collect your reward from the chest that appears after you have spoken with Eris Morn.

As a reward for completing this quest, you will receive one of the Lectern Weapons, such as “A Fine Memorial” but this may vary per player/class.

In addition to the Lectern Weapon, you will also receive the Symphony of Death Exotic quest.