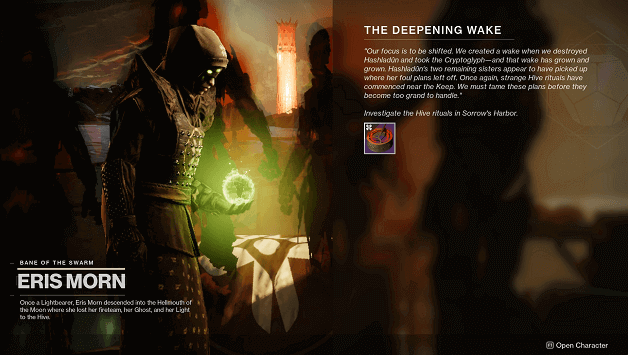 The recent defeat of Hashladun did not end her doings, it appears her sisters have picked up where she left off and rituals have started to take place.

You are tasked with investigating and putting a stop to these rituals and preventing their plans from being accomplished before things get out of hand.

This quest involves participating in the Altar of Sorrows and can also be considered an introduction to doing them (teaming up with other players).

How To Get The Deepening Wake Quest?

Once you have progressed to the end of the Legacy: Shadowkeep quest, The Deepening Awake will be available from Eris Morn. 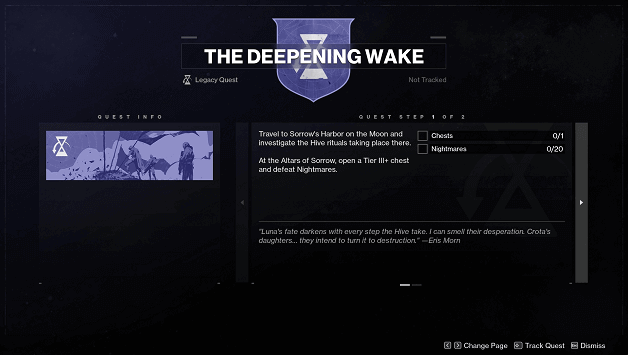 Your task will be to participate in the Altar of Sorrows event (since a lot of Nightmares spawn there) in order to defeat 20 nightmares and open a Tier III+ Chest.

As you participate in the Altar of Sorrows, there will be several Nightmares spawning and this is where you will be able to get a lot of kills.

The Altar of Sorrows have different stages, the further you go, the better the chest, and you will need to participate and get at least a Tier III chest.

Head back to Eris Morn in Sanctuary and speak with her to complete the quest, which also has her speaking about the rituals being only the first step, as there is more to learn.

This concludes the quest and will unlock a dungeon that you will be able to participate in from then on.

Once you have completed The Deepening Wake quest, you will be able to participate in the Pit of Heresy Dungeon.