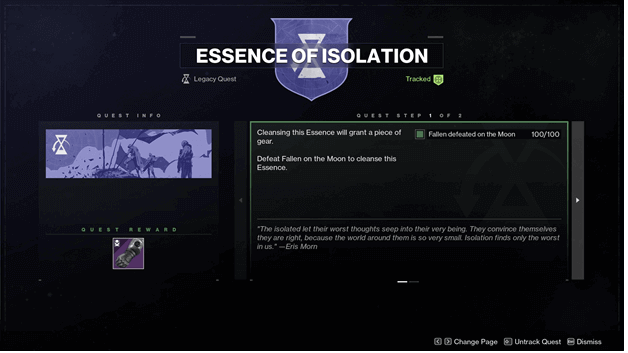 You have obtained the Essence of Isolation quest after successfully defeating the Nightmare of Taniks, The Scarred, and obtaining it from him.

To cleanse the Essence of Isolation, you will need to defeat enemies which must be done on The Moon if you are to craft a piece of Dreambane armor.

How To Get Essence of Isolation Quest?

Step1: Defeat Fallen On The Moon

While initially, you would think that the enemies you would be facing would normally be the Hive for this type of mission, cleansing this essence requires you to defeat Fallen.

You will need to defeat 100 Fallen enemies and this can only be done on the Moon, which means defeating enemies on other planets won’t work.

A good idea is to hang around where most of the Fallen spawn in the area or to do one of the 3 lost sectors on the moon which have Fallen in them.

Once the Essence of Isolation has been cleansed, it will now be time to create a new piece of Dreambane armor.

Make your way towards the Lectern of Enchantment, in which you can reach the first fast travel area and interact with it to obtain the armor and complete the quest.

Once you have interacted with the Lectern of Enchantment, you will be rewarded with one of the following gauntlets based on your class.