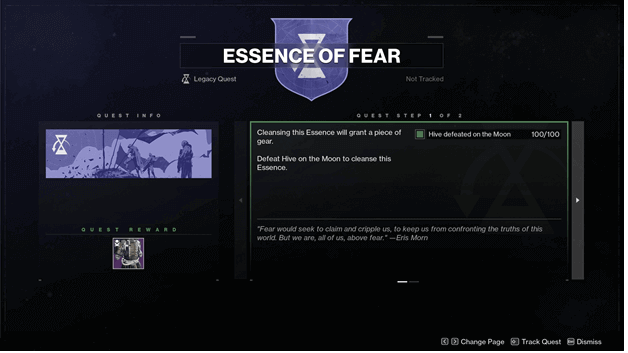 After obtaining the Essence of Fear from defeating the Nightmare of Phogoth, you will need to cleanse it by defeating specific enemies on the Moon.

By completing this quest, you will be able to acquire a piece of Dreambane armor, which will allow you to enter the Pyramid once you have a full set.

How To Get Essence of Fear Quest?

The Essence of Fear quest is obtained after you have completed the Nightmare Hunt: Fear mission, which is where you face the Nightmare of Phogoth.

Step 1: Defeat Hive On The Moon

The first step in the Essence of Fear quest is to defeat Hive enemies on the Moon, which means defeating them on other planets will not count.

A good idea would be to participate in events where there are Hive enemies or you may fast travel to Sorrow’s Harbor and do the K1 Revelation Lost Sector.

You will need to defeat a total of 100 Hive enemies to proceed with the next step.

Now that you have cleansed the Essence of Fear, head over to the Lectern of Enchantment and you will be able to obtain a piece of Dreambane armor.

Completing the set of armor will grant you the ability to enter the Pyramid safely and proceed with the Legacy: Shadowkeep quest.

Once you have interacted with the Lectern of Enchantment, you will be rewarded with one of the following chest armors based on your class.