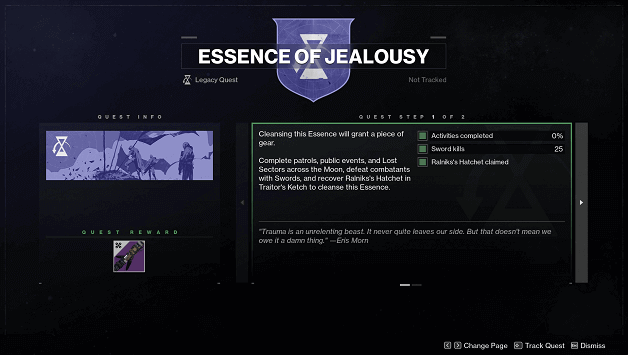 The Essence of Jealousy quest is one of the essence quests that you can find on the Moon and later on rewards you with a Legendary Sword.

This quest involves cleansing the Essence of Jealousy, mainly focused on completing events across the Moon as well as using swords.

How To Get Essence of Jealousy Quest?

The Essence of Jealousy quest is obtained after you have processed the Firewall Data Fragments in the K1 Revelation Lost Sector.

This can be completed by following the Lunar Spelunker bounty, which is obtainable from Eris Morn on the Moon.

Step 1: Cleanse the Essence of Jealousy

There are multiple requirements for cleansing the Essence of Jealous, mostly including completing activities such as patrols, public events, and Lost Sectors on the Moon.

You are also required to kill 25 enemies with swords and claim Ralniks’s Hatchet, which can be obtained after defeating Ralniks, Blood of Kell.

Ralniks can be found in Traitor’s Ketch, which is towards the right of the Anchor of Light, far to the back of a large structure.

Once you have completed all of the objectives from the previous step, you will be able to head to the Lectern of Enchantment and obtain the Legendary Sword called Night Terror. 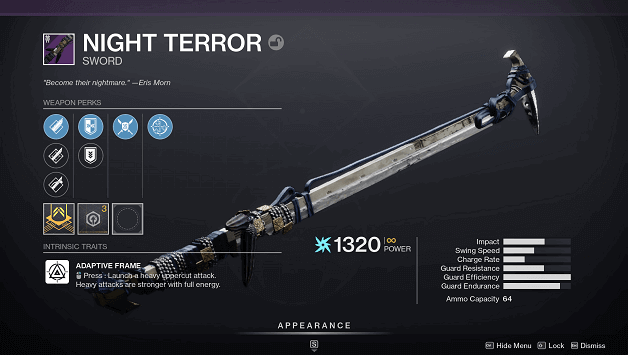 Players who complete this quest are rewarded with a Legendary Sword called Night Terror, which they receive during Step 2.

The Night Terror appears as a sword with a hook at the end and can have perks that are both good for offense and defense.