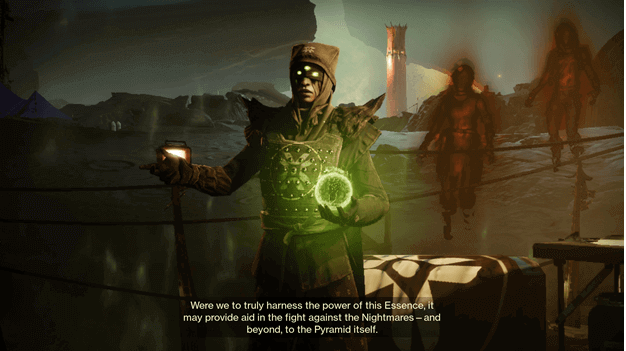 Eris Morn speaks to you about the Essence that was obtained and in that, if it were harnessed, it would help against the Nightmares and even with the Pyramid.

With the Essence in hand, it must first be cleansed of despair, which will allow its true power to be harnessed for better intentions.

During this quest, you will need to cleanse the Essence by participating in activities on the Moon, defeating enemies, and cleansing the Essence in the process.

How To Get Essence of Despair Quest?

The Essence of Despair quest can be obtained by speaking with Eris Morn, usually available after you have completed A Mysterious Disturbance or the In Search of Answers missions. 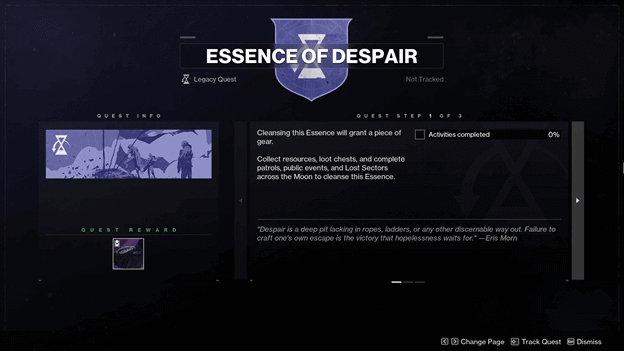 Step 1: Complete Activities on The Moon

To cleanse the Essence, you will have to collect resources, loot chests, complete patrols, public events, and Lost Sectors on the moon.

A quick way to complete this would be to head to one of the lost sectors (K1 Logistics or K1 Communion are close by and suggested) as you simply have to do three runs.

Doing activities will increase the completion which needs to reach 100% for you to progress to the next quest step.

After you have cleansed the Essence, head back to Eris Morn as its true purpose will now be uncovered, allowing you to proceed.

Simply go back to Eris Morn and this usually completes the quest, skipping step 3 for some players if the Lectern of Enchantment has not been unlocked.

For those who have not skipped quest step 3, you will need to use the Lectern of Enchantment, which is found in Sanctuary, to the left of Eris Morn.

This will allow you to fuse the Nightmare Essence and will create a new piece of gear.

Completing the Essence of Despair quest will reward you with a piece of gear that will vary amongst the different character classes.