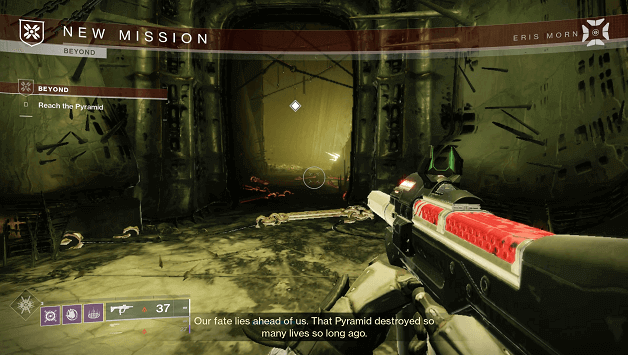 You have finally obtained all of the pieces of Dreambane Armor needed to enter the Pyramid and are now ready to proceed.

After Eris Morn has briefed you on what you need to do, you will be making your way towards the Pyramid and will need to find a way to enter it.

What lies within will be a new discovery and will help Eris Morn complete her research to unveil more about the Pyramid.

How to Get Beyond Mission?

The “Beyond” mission is obtained once you have reached Step 16 in the Legacy: Shadowkeep Campaign and is required to proceed further with the quest. 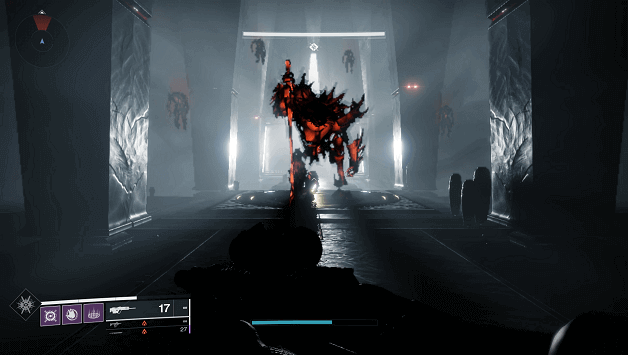 Make your way through the path and continue following the waypoint until you find yourself in range of the Pyramid.

You will eventually find yourself in the Enduring Abyss which you must proceed through, defeating any enemies that block your path.

Once you see the Pyramid, there will barely be any place to walk but if you check the left side there will be a path that you can follow until you are near.

Continue making your way towards the Pyramid, jumping down as you traverse the path on the left and at this point, Ghost will start to act strange as if it was being taken over.

As you move across the path, you will suddenly be pulled towards the Pyramid until you are brought inside.

Now that you have been brought into the Pyramid, follow the set of steps and head towards the left to follow the waypoint.

Watch your step as you can fall to your death in some of the areas.

You will eventually find yourself at a statue-like object which resembles Dominus Ghaul and will be teleported into an arena as you get closer.

3) Defeat the Nightmare of Dominus Ghaul

You will start fighting the Nightmare of Dominus Ghaul, who will be accompanied by Cabal forces that fight alongside it.

At certain points when you deplete a partial amount of Nightmare of Dominus Ghaul’s health, it will become invulnerable and you will have to clear out the other enemies.

Continue repeating the steps of killing the minor enemies and attacking Nightmare of Dominus Ghaul until you completely deplete its health.

Defeating the Nightmare of Dominus Ghaul will result in you being teleported out of the arena.

After you have returned from the arena, follow the waypoint once again which leads you deeper into the Pyramid.

You will find yourself in front of another statue-like object which resembles The Fanatic and you will once again be teleported to an arena when you approach it.

5) Defeat the Nightmare of The Fanatic

If you remember The Fanatic, you will surely know how annoying this enemy can be and once again you will have to deal with it.

The Fanatic will be accompanied by Scorn enemies and when its health is depleted by a certain percentage, it will become invulnerable until you defeat the others.

Once you have completely finished off The Fanatic, you will be teleported out of the arena back into the Pyramid to explore again.

Once again you are back inside the Pyramid after what appears to have been a second challenge and will need to continue exploring within it.

Head towards the waypoint again and you will find yourself going deeper within the Pyramid until you find yourself at yet another statue-like object, which resembles the Crota, Son of Oryx.

At first when you enter, the objectives will say to defeat Nightmare Swordbearers but your actual objective is to defeat the Nightmare of Crota, Son of Oryx.

You will need to defeat a Swordbearer and pick up the Relic (sword) which is the only thing that can deal damage to Nightmare of Crota, Son of Oryx.

You should be able to defeat it with two relics, which means you have to defeat a Swordbearer and attack Nightmare of Crota, Son of Oryx at least two times to beat it.

There will be no objective appearing once you have teleported back and you will need to continue following the waypoint up a path of stairs.

At the end of the stairs you will see an orb-like artifact descend and will need to approach it, which shows an option to inspect the Unknown Artifact.

Interact with the Unknown Artifact and this will have our character take it, which ends the mission and starts a cinematic.

After the cinematic, you will have completed the mission and will find yourself in Sanctuary on the Moon. 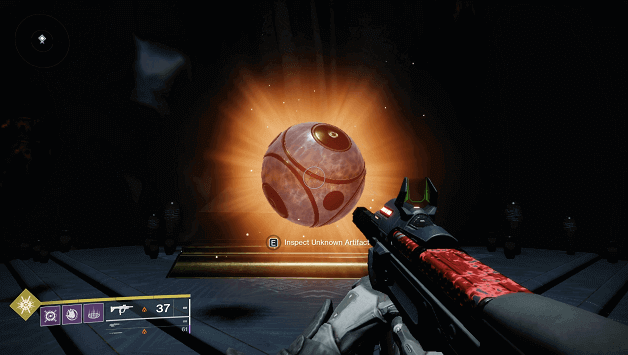 After completing the “Beyond” mission, you will have the Unknown Artifact and will also receive an amount of XP. 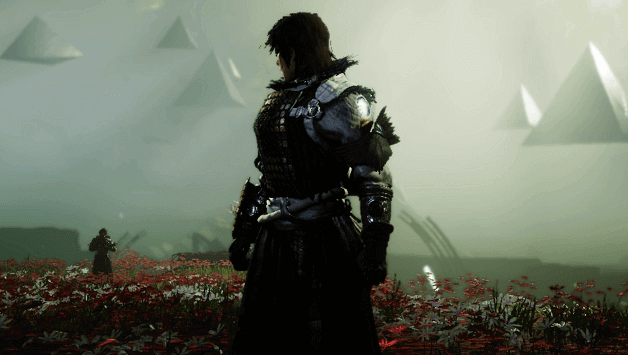 After this quest, you will have the Unknown Artifact and will need to bring it back to Eris Morn so that she can further study it.

The Pyramid has shown signs of despair and negativity as you traversed it, trying to convince your allies and the light abandoned you.

Later on, Eris Morn tells you that what you found is not salvation but instead, destruction and she thinks that there is a possibility the artifact is corrupted but will continue to study it.