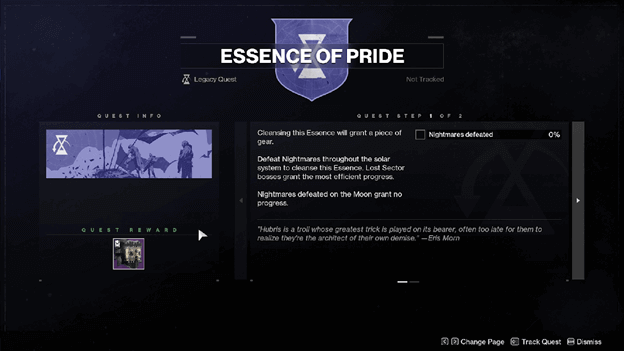 After successfully defeating Nightmare of Skalos, you have obtained the Essence of Pride and now need to cleanse it.

To cleanse the Essence of Pride, you will need to hunt down Nightmare variants of enemies in other places aside from the Moon.

Nightmare kills on the Moon will not count, so you will need to head to other planets in search of worthy enemies.

How To Get Essence of Pride Quest?

The Essence of Pride quest is obtained after you defeat Nightmare of Skalos in the Nightmare Hunt: Pride mission.

This step is easier than it sounds, you simply need to head over to Lost Sectors on other planets that have Nightmare enemies in them.

A good place to go is the European Dead Zone and head for Widow’s Walk, you can complete this quest step within 2 to 3 runs.

Now that the Essence of Pride has been cleansed, it is time for you to create another piece of Dreambane Armor.

Head over to the Lectern of Enchantment in Sanctuary near Eris Morn and interact with it to receive a new piece of gear.

Once you have interacted with the Lectern of Enchantment, you will be rewarded with one of the following helmets based on your class.