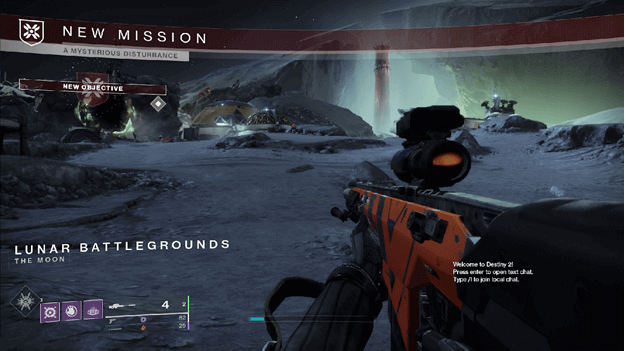 Following Crota’s Death, the Hive has begun to appear on The Moon, pouring in from the Keep, and the Vanguard needs your help to push through their forces.

This quest serves as an introduction to the Shadowkeep DLC and is the first mission you will partake in related to its legacy content.

You will need to help the Vanguard push forward against the keep and secure positions on The Moon to restore control.

How to Get A Mysterious Disturbance Mission?

A Mysterious Disturbance Quest can be obtained once you set foot on the Moon, acting as an introduction to the planet and the Shadowkeep campaign. 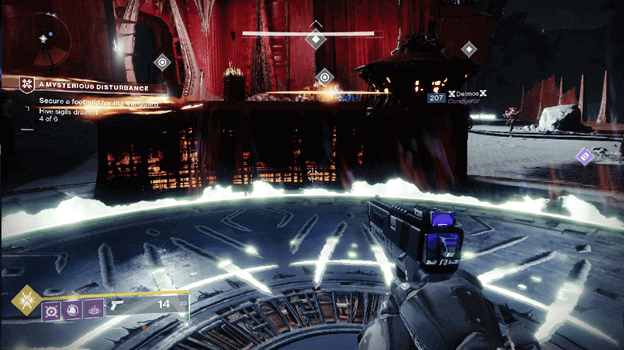 The Hive have poured onto the surface of the Moon and you will need to defeat them to push forward.

Ghost will report that the Hive appears to be retreating and that they are erratic, while Zavala confirms that this is due to the loss of their leader.

Follow the waypoint which will lead you to the location of a foothold that you will need to secure.

3) Secure a Foothold for the Vanguard

Once you arrive at the next area, there will be 6 Hive sigils (circles with markings) that you will need to stand to drain.

There are a total of 6 sigils in the area and you will have to drain all of them to proceed with pushing forward.

After all the sigils have been drained, a large floating enemy known as the Eye of the Swarm, which you along with other players in the area will fight.

5) Advance Toward the Scarlet Keep

Continue making your way towards the next waypoint which will lead you to the Scarlet Keep, you will need to press on and continue to make your way deeper within.

Eventually, as you follow the waypoint, you will find yourself in Sorrow’s Harbor, where you will need to find a way into the Scarlet Keep.

Once again you will need to defeat several enemies as well as another Eye of the Storm, which will bring down the barrier blocking your way to the Hive Keep.

Continue making your way towards the waypoint and search for Eris Morn, you will need to head inside the Keep and begin your search from within.

8) Defeat the Nightmare of Crota, Son of Oryx

The Nightmare of Crota, Son of Oryx will spawn into the area once you reach the deeper parts of the Keep, and you will have to fight against it.

Eventually, you will be overrun and incapable of defeating the enemy but thankfully Eris Morn will save you just in time.

A cutscene will play and the mission will be over.

After the mission is completed, you will get a random piece of gear and the In Search of Answers mission (Shadowkeep Campaign) will be available.