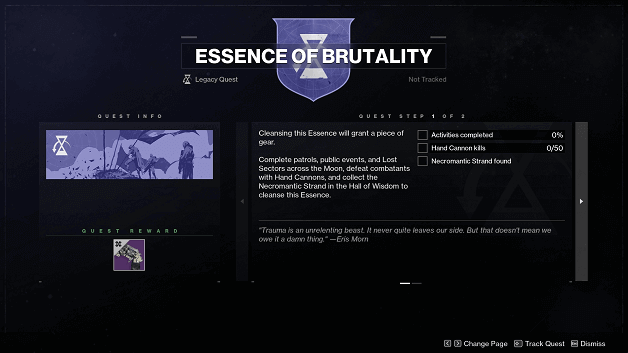 The Essence of Brutality is a quest that rewards players who accomplish it with a Lectern Handcannon, a legendary weapon.

This quest focuses on the use of Hand Cannons and the completion of activities on the Moon to cleanse the Essence of Brutality.

How To Get Essence of Brutality Quest?

The Essence of Brutality quest is obtainable after you have completed the Legacy: Shadowkeep quest, which is under the “A Persistent Threat” dialogue with Eris Morn.

The Essence of Brutality requires that you complete certain activities on the Moon, which can be your choice of patrols, public events, Lost Sectors, and more.

You will also need to defeat 50 enemies with a Hand Cannon and obtain an item called Necromantic Strand.

The Necromantic Strand can be found to the upper right part of Archer’s Line where you will see a passage that has been cut off on your map.

Once you reach that area, you will need to go into a cave to the left of the area which will lead you deeper until you find the Necromantic Strand.

Once you have the Necromantic Strand and have completed the other objectives, you may return to Sanctuary to finish the quest.

Head to Sanctuary and interact with the Lectern of Enchantment, you will be able to obtain the Legendary Hand Cannon and the quest will be complete. 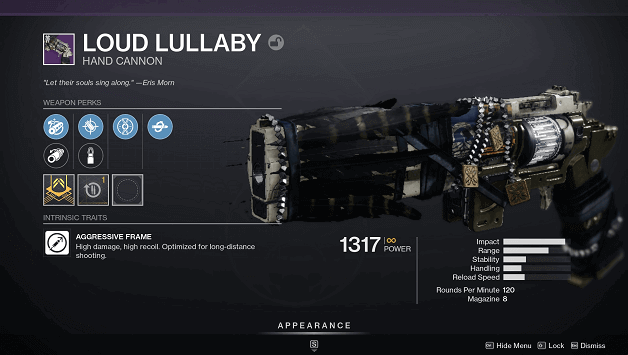 Completing the Essence of Brutality quest will reward you with the Loud Lullaby Legendary Hand Cannon.

This Hand Cannon is known for being powerful and accurate even at longer ranges and may come with perks to further enhance its damage or stability.