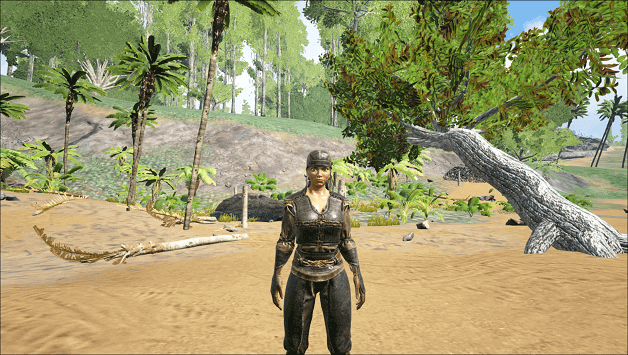 Ark Survival Evolved has a level-up system that provides your character with the ability to become stronger and more advanced in the game.

Players who spend time doing more will eventually obtain more experience and will be able to strengthen their character and build them towards a specific playstyle.

Actions such as farming, crafting, killing creatures and more will provide your character with experience which increases their level.

How To Level Up Characters Fast in ARK?

The higher your level, the slower it will be to reach the next as you will need even more experience than the previous one.

To level up characters fast, there are certain methods that you can stick to which will allow you to speed up the process of reaching the next level.

In the early phase of the game, you will find yourself with pretty much nothing so the first thing you need to do is to get the basic tools and make a small shelter.

Create a few campfires and torches to burn up Wood to make Charcoal and start farming Stone and Flint so you can later use these to make Sparkpowder and later Gunpowder.

You can craft these in a Mortar and Pestle and even use many to speed up the process while staying near to gain experience.

Follow this along with doing the regular base building and creature taming from time to time and your level should reach mid-game easily.

Your mid-game will have you slightly stuck unless you figure out new ways to get experience and while most players tend to grind resources and do mass crafting, this can use up time.

If you have the time to farm and mass craft, you can focus on mass crafting Rafts as these give a decent experience and are cheap when it comes to resources.

You should also work on your base, if possible, especially in a PVP server where other players may be hostile and prevent you from mass crafting.

Another option is to get on a strong mount and go around hunting other creatures for their resources as well as experience.

The late game is where things get pretty serious and experience is needed in large amounts, making it necessary to do multiple actions.

By this time, you should already be multitasking when it comes to crafting and managing your base, crafting bullets, resources from the Chemistry Bench, and more.

You may also attempt to farm the stronger creatures in the game such as Rexes and Spinos for a lot of experience.

Another way to farm experience is to breed Rexes or other creatures with high base experience to hatch and kill for high amounts of experience. 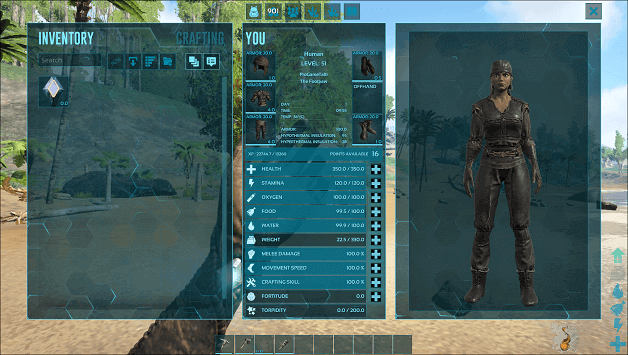 Leveling up will allow you to allocate points into different stats that affect your character, each of them having its benefit.

Players will receive a stat point upon leveling up and may distribute them among the stats to build their character.

Your health determines the maximum damage you can take, having a higher amount of health will increase your survivability allowing you to withstand more damage.

The number of stamina you have affects how active your character can be, this is consumed whenever you perform actions such as performing melee attacks, running, jumping, and swimming.

The higher your oxygen, the longer you can stay underwater and the faster you can swim while you are in the water.

Your character needs food to survive, without it they will start to slowly take damage and die. (The higher your food stat, the longer it takes before you need to eat again)

Your character needs water to stay hydrated to replenish their stamina or else they will continuously lose health and have a slower stamina regeneration rate.

The weight stat determines how much your character can carry, when you have too much in your inventory with little weight, you will move slowly or become encumbered.

Putting stats into melee damage will increase the amount of damage you do with tools and melee weapons by a certain percentage.

Your movement speed affects all of your movements which are mainly walking and running, allowing you to save more stamina by reaching your destination faster.

This stat affects the quality of your crafting, which can improve the output from using blueprints, and at the same time it speeds up the crafting process.

The amount of fortitude you have will determine how you are affected by the hot and cold weather as well as it will allow you to resist poison and torpor. 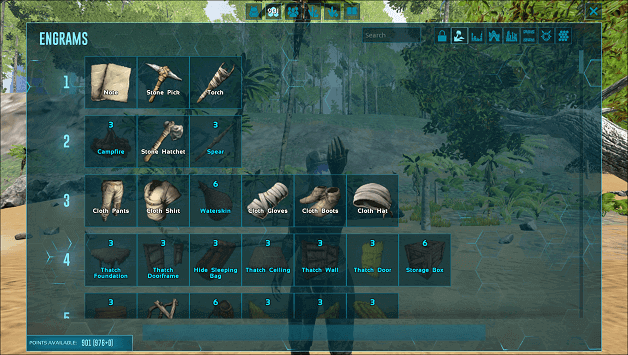 Engrams are your character’s knowledge in the game, allowing them to craft more items and advance in technology as they level up and learn more.

Every time you level up, you will be given a certain amount of engram points which you can use to pick these engrams.

Once an engram has been picked (learned) your character will be able to craft them provided they have the materials for it.

Should a player wish to reset their skills in Ark, they simply need to craft Mindwipe Tonic, which can be made when they are around mid-tier.

This requires some ingredients which are easily gathered later on in the game if you know where to find each of the resources.

A Mindwipe Tonic can be crafted with the following resources:

The level of your character will usually determine their overall capabilities, especially with the right stat build to fit your playstyle.

The sooner you reach higher levels, the easier it is for you to progress in the game, especially when playing on a PVP server as it is competitive.