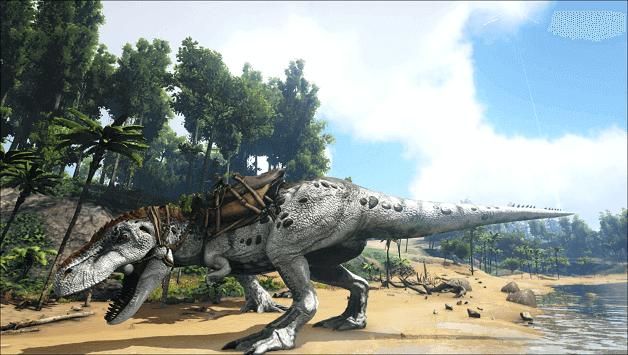 In Ark, you can have several tamed creatures which each have their level, gain experience, and can have points added to stats.

You can modify the way your creatures are and can boost these stats to make them the perfect mounts that suit you.

To level up your dinosaurs or creatures in Ark, they need to be near you for a drip of experience over time or kill other creatures and players.

How To Level Up Dinos Fast?

Tamed creatures will usually gain experience just by being near you but performing certain actions can speed up their leveling.

One of the fastest ways to gain experience after recently taming a creature would be to go out and kill other weaker creatures.

You may also get experience for hitting trees along the way so make sure to deal as much damage as you can for a few good levels.

Keeping creatures near you will provide them with experience over time, so you can use this to your advantage when doing things in your base.

Creatures also get experience when a member of your tribe is crafting if you are mounted on them, giving them a share of the experience.

During the mid-game, you can take your tamed creature out and presumably level them up by attacking stronger creatures.

You can also set them to follow a passive creature while leaving them on aggressive to make them hunt then return to the creature afterward.

This will allow them to passively kill creatures for the experience even when you are not around, making it easier to just come back to them later.

If you want to level up your creatures, you can head to spots where powerful dinosaurs such as Rexes or Spinos are and kill those.

Getting in the late game levels can be a bit tricky as some creatures will be stuck due to the high amounts of experience needed.

Most of the experience you will be getting for your creatures during the late-game level should be from killing stronger creatures that are high level as well.

One of the techniques you can make use of is to breed several high-level creatures such as rexes and kill the hatchlings for the base experience.

The higher the level of the creatures that your tames kill, the more experience they get and you can increase this further with a Lystrosaurus buff.

You can tame Lystrosaurus which can provide a buff to nearby creatures that increases the amount of experience they gain.

These creatures are easy to tame and can be found during the early game phase, allowing you to make use of their buff earlier.

This is good for leaving creatures together at the base while you are nearby for bonus experience or a player can hold one nearby with a flyer while you level up other creatures. 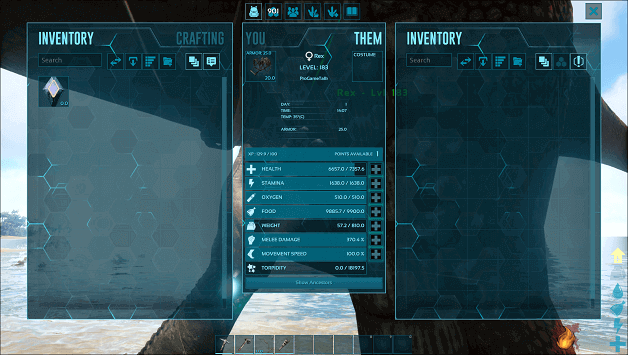 Just like your character, all of your tamed creatures have their stats which you can put points into when they level up.

A creature’s health determines the total amount of hit points that it has, making it more capable of surviving fights with higher health.

The creature’s stamina allows it to run and do other actions such as attack and use abilities making it essential for those who get tired easily.

Your creature’s oxygen allows it to travel underwater and once finished, it will start to drown, losing health at a fast rate.

Your creature requires food to replenish its stamina and without food, it will go hungry and start to lose health.

The weight stat for creatures allows them to carry more weight, which includes whatever the creature has in its inventory as well as the weight of the rider and their weight.

This stat affects the amount of damage that creatures can do but it is not restricted to melee attacks, it also affects some abilities and ranged attacks of different creatures.

This stat determines how fast your creature can travel across land, making it easier to get around and chase enemies with faster movement speed.

Torpidity is the amount of torpor affecting the creature, which will cause them to become paralyzed if filled up.

The higher the level of your creature, the higher its stats will be and this is present in wild creatures as well, which makes their base level important for better stats.

Creatures that have a higher base level will still gain the same amount of experience as if they were level 1 and will continue up to a certain number of levels starting from their base level.

Being able to quickly level up your creatures will make it easier for you to farm, kill and survive in Ark, making them more efficient in their roles.