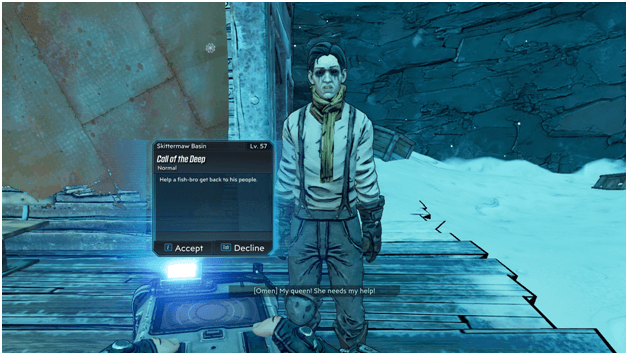 A strange and delusional appearing man named Omen is in distress as he claims that his queen needs his help but he can’t get to her.

Your task is to help him make the necessary preparation so that he can join his queen in the depths of a large frozen lake. 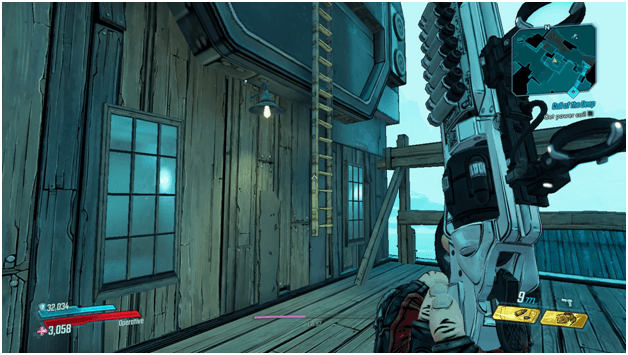 You will first need to head over to the Nethes Mines to obtain a power coil which is needed to get Omen’s crane to be operational again.

Grab a vehicle or run on foot (vehicle advised) and head to the location pointed out by the waypoint to where the mines are.

Once you arrive at the Nethes mines, fight your way to the top to locate where the power coil is located.

You won’t be able to get to it normally and will need to climb up a ladder and make a few leaps in order to reach it. 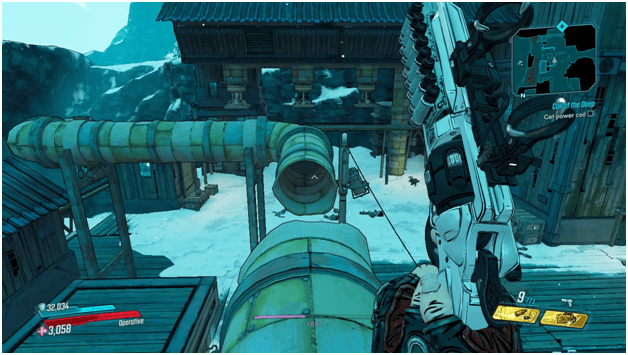 There will be a ladder that leads up to a shack nearby which you must climb up to in order to get on top of some pipes.

Walk on top of the first pipe and jump over to the next until you reach the end where you will then be able to jump to the other side.

There will be a belt conveyor that you must jump to as well as some presses that you must avoid in order to reach the power coil. 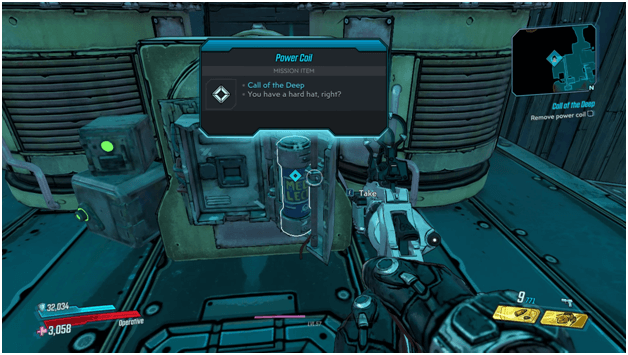 After doing your little parkour and timing routine to get to the power coil, you may simple open up its box and take it before heading back to Omen.

Once you get back to Omen, head to the crane and proceed with installing the power coil into it so that it may be used.

After you restore power to the crane, it will begin to operate and move a cage to the side while Omen assigns you another task. 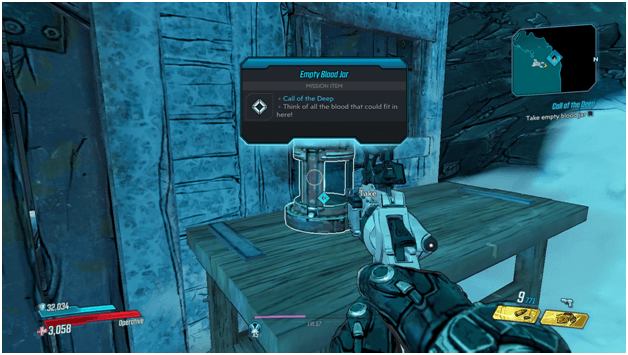 You will need to collect what Omen calls the “Blood Of Gythian” in order to melt a hole in the frozen lake.

Grab the Empty blood Jar on the nearby table marked by a waypoint and make your way to the marked blood source. 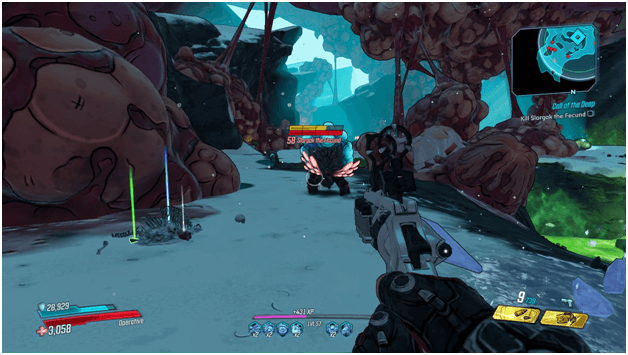 As you proceed to the waypoint, you will find yourself inside an infested cave and will later on have to kill the kriches that are inside it.

Once you have killed most of the creatures in the area, a stronger krich names Slorgok The Fecund will appear and you must kill it to continue with the mission. 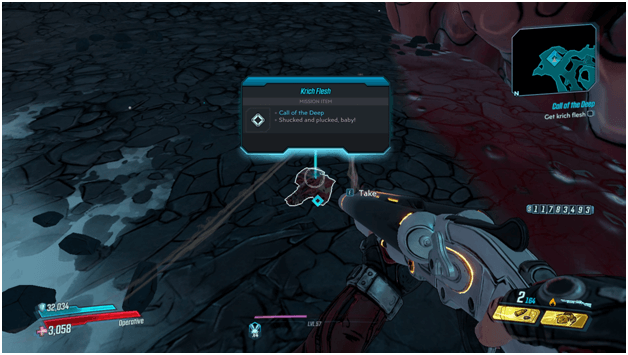 After killing your fair share of kriches and Slorgok The Fecund, head over to the waypoint and pick up Krich Flesh that has been dropped. 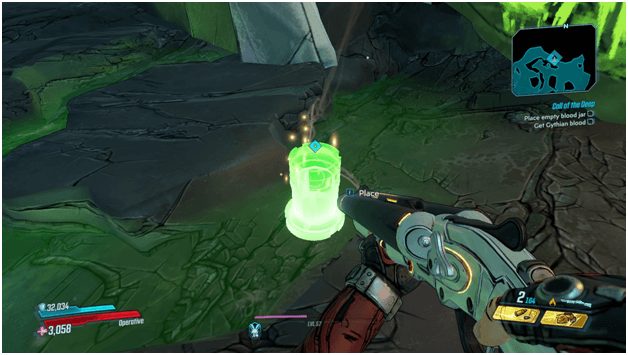 Proceed to the waypoint afterwards to place the empty blood jar to obtain “Gythian’s Blood” and make your way back to Omen. 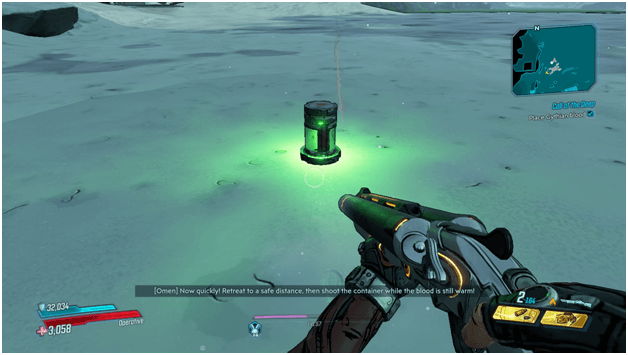 Once you have returned to omen, place the Gythian Blood in the designated location and move back before taking a shot at it.

This will melt a large hole into the frozen lake and will now allow Omen to start fishing in the whole using the krich flesh you obtained. 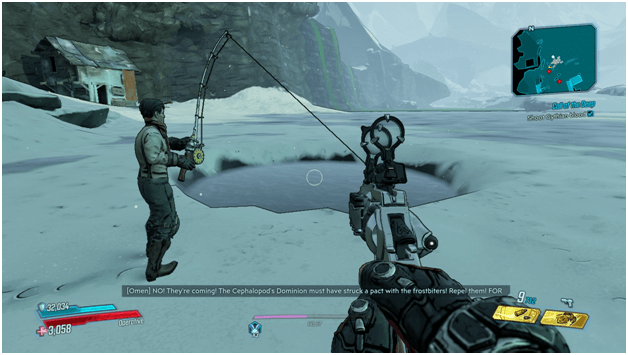 Omen will begin to fish peacefully but several waves of Frostbiters will begin to close in on your position which requires you to protect him.

When all of the attackers have been dealt with, Omen will need your help as something was caught but he will need you to help him hold on to it.

Approach Omen and interact with him to help him reel in his so called “Scalebrother” so he can bring it out of the water. 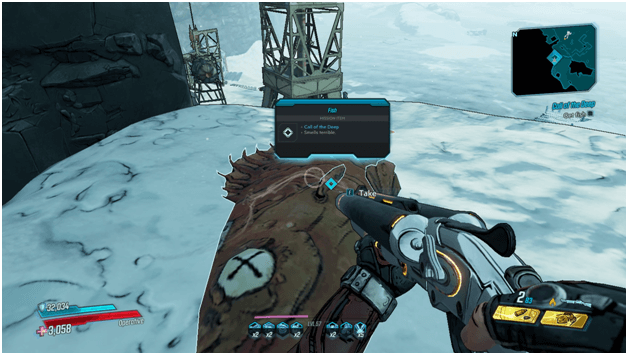 The Scale brother turns out to be an oversized fish and it will be flung into the air, resulting in you having to chase after it.

As you head towards the fish, you will be attacked by a bunch of wolven which you can either fight or simply run past. 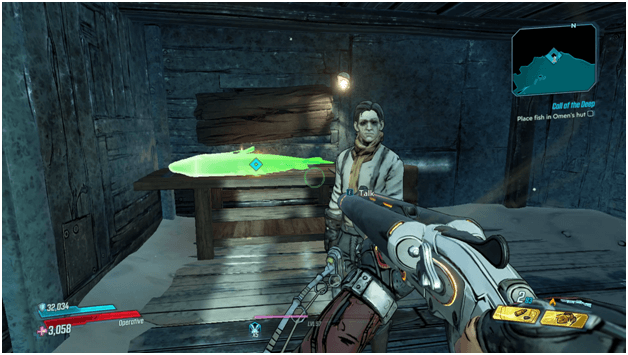 Omen will ask you to place the fish into his hut so that he can utilize the fish to better make him suitable for the depths he will venture off into.

Head over to his hut to place the fish on the table and walk outside to wait for Omen’s transformation. 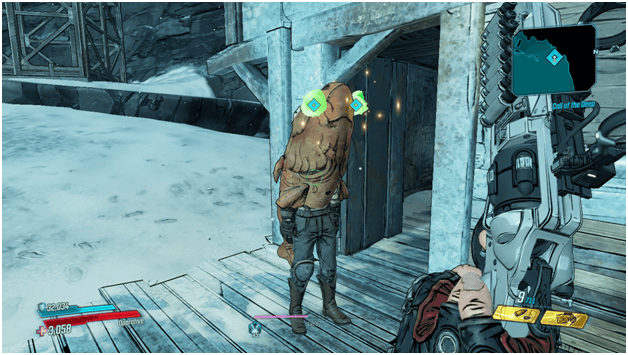 As Omen exits his hut, you will realize that he turned the fish into a suit that he will seemingly use to dive with.

Omen will claim there is no light source and will ask you to grab the nearby fog lights and stick them into the fishes head as the fish has no bioluminescence. 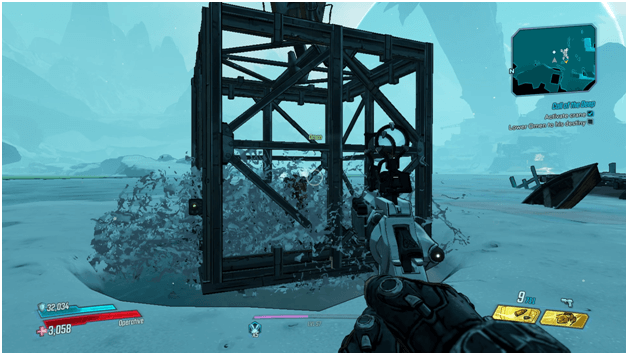 Once Omen is ready, he will walk into the cage and ask you to operate it, releasing him to his fate in the debts.

Call of the Deep Mission Rewards 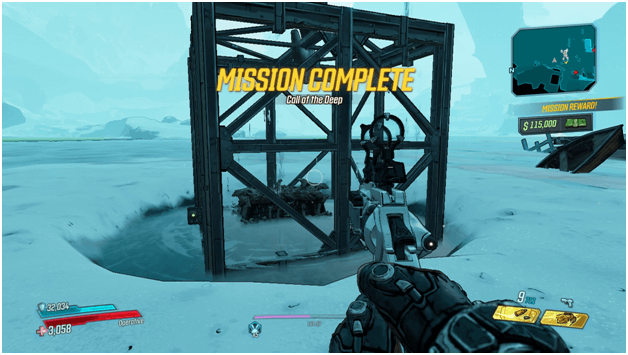 As the crane returns with only a chest inside, the mission will end and you will be rewarded with around 115,000 cash. 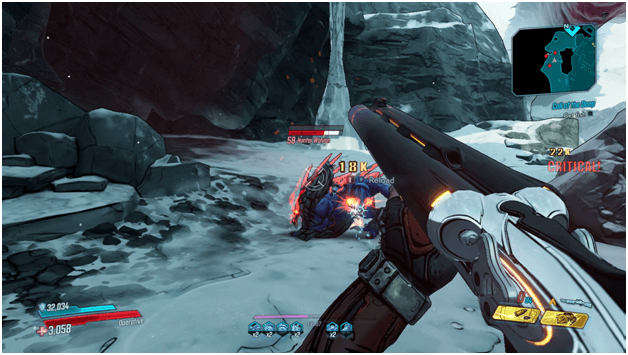