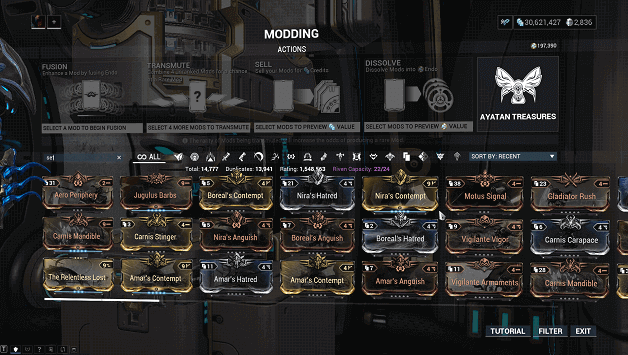 Warframe has a unique way of improving the stats of your equipment which goes as far as your Warframe, weapons, companions, and more.

While there are all kinds of mods that function separately, there are special mods called Set Mods which provide you with special benefits when they are equipped.

Making use of your ordinary mods is fine but with Set Mods, there is a lot more you can achieve and you can come up with some pretty useful and fun builds to use.

What Are Set Mods?

Set Mods, also known as Mod Sets or Mod Collections are mods that belong to a specific set, which you can determine by the name of the mod.

For example, we have Hunter Mods which have names such as Hunter Munitions, Hunter Track, Hunter Adrenaline, and more, all beginning with “Hunter” meaning they are set mods.

Set Mods provide you with a Set Bonus that increases when you have more equipped, increasing the bonus provided per mod.

There are Set Mods that can be equipped on Warframes, weapons, and companions to complete their set bonuses, depending on which set you are focusing on.

The following is a list of all the Warframe Mod Sets that you can obtain in the game and their set bonuses:

With the introduction of the Plains of Eidolon, the first Set Mods arrived in Warframe, becoming available on October 12, 2017.

These mods are rewarded to players who have completed a quest known as The Sacrifice, where they discover the mysteries of Umbral Excalibur and his lore, first introduced on June 15, 2018.

Upon the release of Orb Vallis, these mods were also released which made them available as rewards starting on November 21, 2018.

These mods were released following the introduction of the Jovian Concord update, becoming available on May 22, 2019.

The Cambion Drift mods are based on creatures from the infested world of Deimos and were added in the Heart of Deimos Update on August 25, 2020.

Along with The New War, mods of the three Archons Amar, Boreal, and Nira were added in The New War update on December 15, 2021.

How To Get Set Mods?

Mods sets are usually obtained by completing bounties or from hunting down enemies and you will usually obtain them as you play throughout the game.

Most of these can be farmed in specific locations or on certain planets based on their requirements to be obtained.

To know how to obtain each of the mods, feel free to check out the above mentioned list for every mod in the set and how to get them.

Set Mods have been a big help ever since they were introduced as some of the most creative builds have been made with them.

Some Warframes and weapons may sometimes be lacking and with the right mods, especially ones from collections, you can make up for any downsides.

Each mod set has a specific Set Bonus and these can be used in many ways especially when you strategize with your Warframe or weapons that you are using.