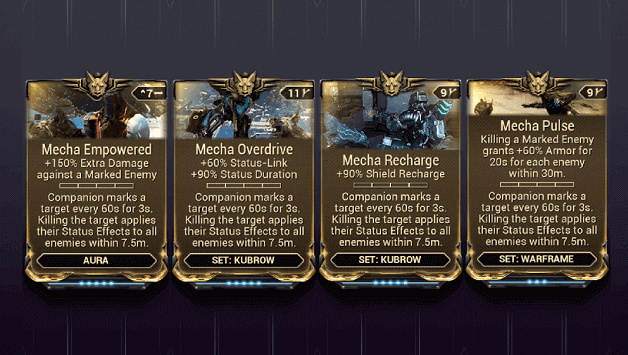 For all the Kubrow lovers out there, this mod set empowers them and your Warframe by providing bonuses that make both of you efficient on the field.

The Mecha Set Mods provide your Kubrow with the ability to mark a target for the two of you to focus on, providing bonuses once you defeat the marked target.

This set of mods can be used strategically to easily defeat stronger enemies and provide both you and your Kubrow with many benefits.

How To Get Mecha Mods?

You can obtain Mecha Mods by completing bounties that are available in Fortuna (Orb Vallis) and can check which ones will be rewarded from their drop tables.

The Corpus Trencher Target, who you encounter on Capture Mission on Orb Vallis is also known to drop Mecha Mods. 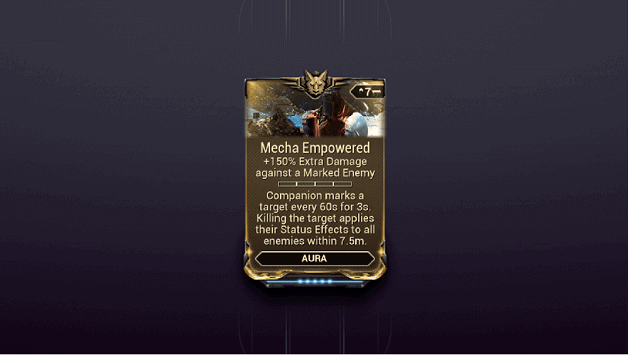 The Mecha Empowered mod is an Aura Mod that provides extra damage against Marked Targets from the Mecha Mod Set.

Extra damage from this mod begins from an additional 25% damage and reaches up to 150% extra damage when fully ranked.

This mod makes it easier for you to kill enemies that are marked by your Kubrow, allowing you to easily activate the bonuses from the other mods in the Mecha Mod Set. 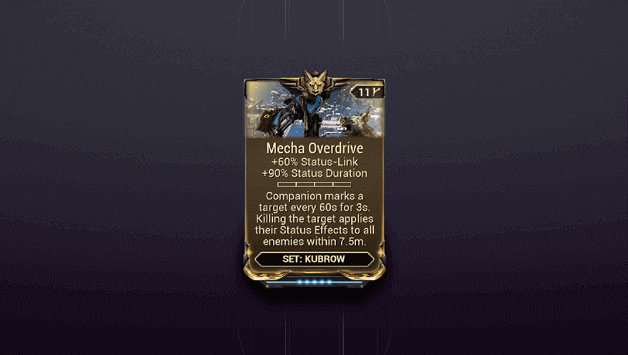 Mecha Overdrive is a mod that you equip your Kubrow with, providing git with Status-Link and increased Status Duration.

Your Kubrow will start with 10% Status Chance up to 60% linked while having an increased Status Duration of 15% up to 90% when maxed out.

The additional Status Chance provided to your Kubrow will give it more ways to shred your enemy’s health while Status Duration increases how long the Status Effects last.

The Status Effect provided by the link is based on the primary weapon that you have equipped. 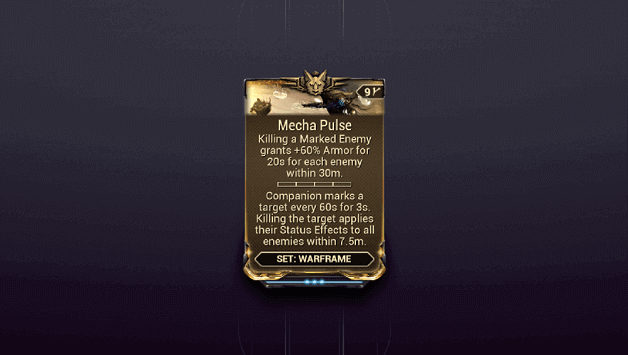 The Mecha Pulse Mod provides anyone who kills a marked enemy with bonus armor for a certain period, providing 15% to 60% bonus armor depending on the mod’s rank.

Bonus Armor will last from 5 seconds up to 20 seconds when the mod has been maxed out and Range will be from 7.5 meters up to 30 meters at max.

This becomes handy in increasing the survivability of not only you but also your allies since whoever kills the marked target will obtain the buff. 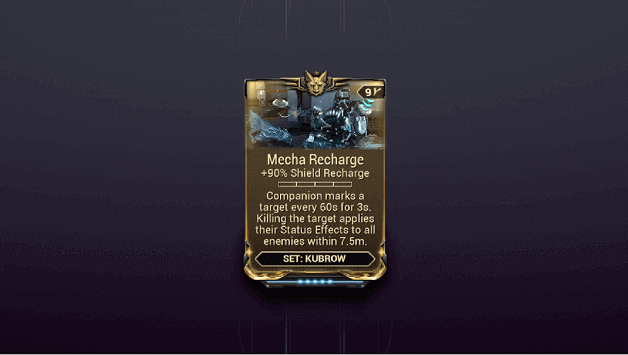 The Mecha Recharge mod improves your Kubrow’s Shield Recharge, providing it with 15% at rank 0 and reaching up to 90% when maxed out.

The higher the Shield Recharge of your Kubrow, the faster it will regain its shields once it has started recharging, allowing it to quickly jump back into battle.

Mecha Mods have a set bonus that affects your Kubrow, allowing it to mark a target (has a cooldown) and when the target is killed, certain effects are applied.

The main effect when you kill a marked target will spread the status effect that the target had when it was killed.

This makes it easy to spread multiple status effects to several enemies around you and your Kubrow, easily damaging and weakening them.