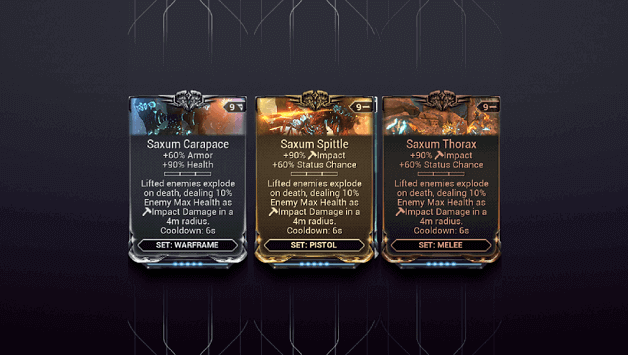 The Saxum Set Mods are a set of mods that increase the Impact Damage of your melee weapon and pistol while also providing a good amount of Status Chance for each.

It provides a good amount of survivability with an increase in Armor and Health while also providing you with the ability to cause lifted enemies to explode on death.

This set of mods is great for Warframes that can lift enemies and kill them to make use of the explosion damage from the set bonus.

How To Get Saxum Mods?

You can obtain Saxum Mods by completing bounties on the Cambion Drift, these may be obtained at any time and you can check the list of rewards before accepting.

It is also possible that you may acquire these mods by chance when you kill a Deimos Saxum Rex. 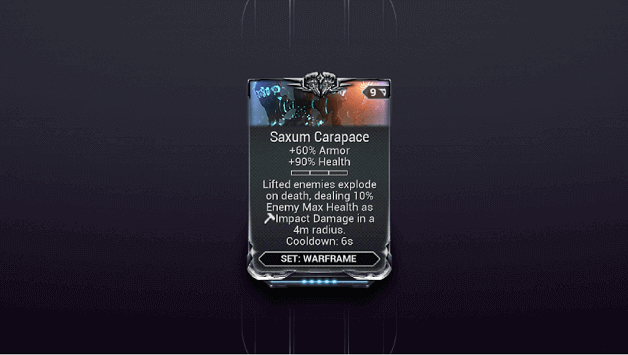 Saxum Carapace is one of the more defensive mods amongst the 3 in the set, providing you with an increase in Armor and Health.

The Saxum Carapace mod increases your Armor starting from 10% reaching up to 60% and Health by 15% up to 90% depending on the rank of the mod.

This adds a good amount of survivability which is perfect for when you need to fight multiple enemies since the Armor reduces damage taken and Health allows you to withstand more. 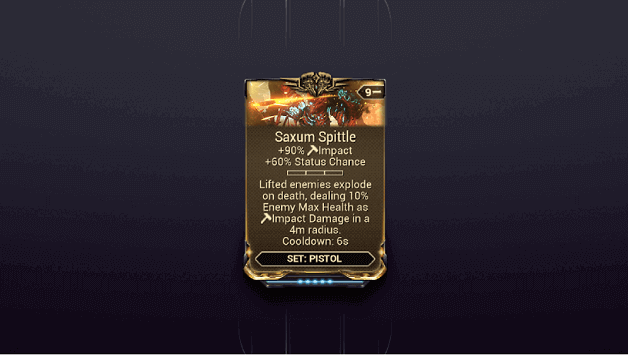 Saxum Spittle increases the Impact Damage of the Pistol that it is equipped in while also adding Status Chance.

Impact Damage is increased from 15% up to 90% while Status Chance starts from 10% and can reach up to 60% depending on the rank of the mod.

This works well with Pistols that mainly deal Impact Damage while also providing a good chance to cause Status Effects to occur. 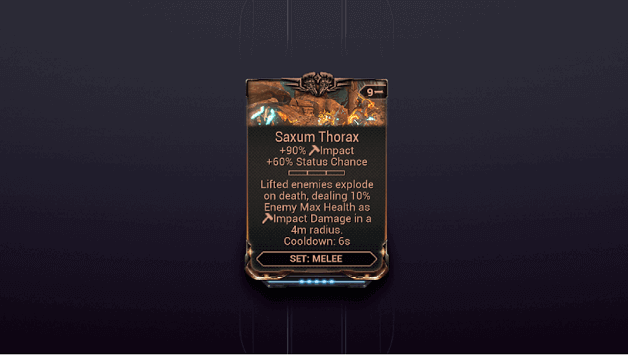 Saxum Thorax increases the Impact Damage of your melee weapon starting from 15% up to 90% along with a Status Chance that begins from 10% and can reach 60% based on the mod rank.

This damage goes well with melee weapons that mainly deal Impact Damage and will also increase the probability of Status Effects occurring.

The Saxum Mod set bonus causes enemies that are lifted to explode when killed, dealing a certain percent of their maximum health as damage in a certain radius.

With more Saxum Mods equipped, the explosion damage will deal more while the range will be increased and will affect a larger area.