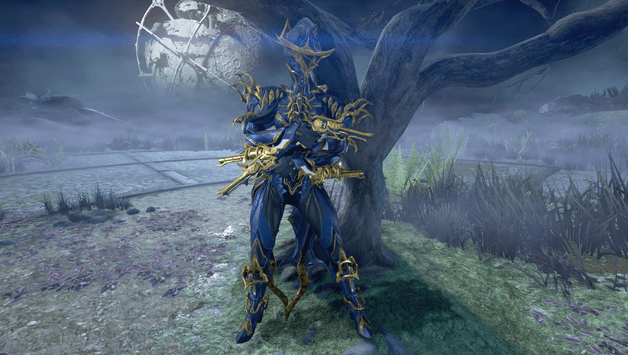 Mesa is a gunslinger Warframe, capable of deal large amounts of damage within merely seconds and taking on the strongest enemies to the biggest groups.

She resembles specializes in dealing ranged damage to enemies while gaining offensive and defensive boosts from her abilities making her almost unstoppable and a very deadly gun fighter.

How to Get Mesa? 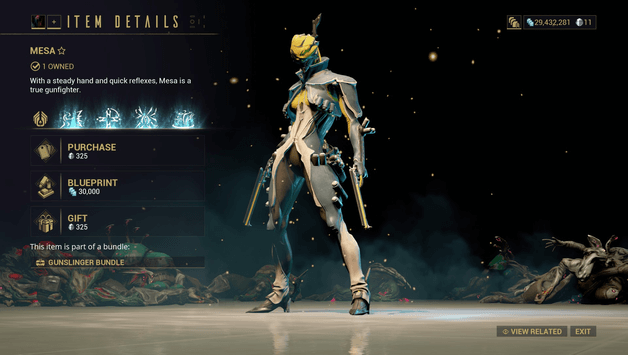 Her blueprint is purchasable from the market located in the orbiter for 30,000 Credits.

It is also possible to buy Mesa for 325 platinum to receive an already built version of the Warframe. 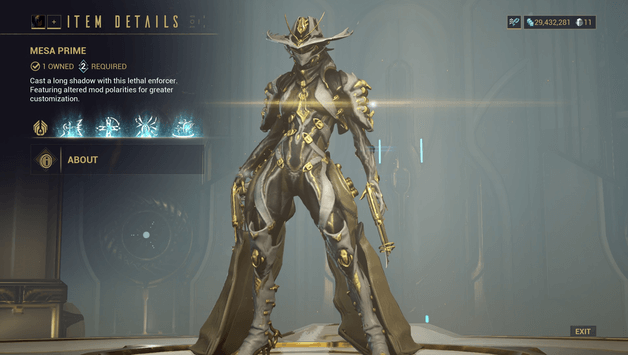 Mesa Prime is the prime variant of Mesa which is stronger and has a higher amount of health, armor and energy. 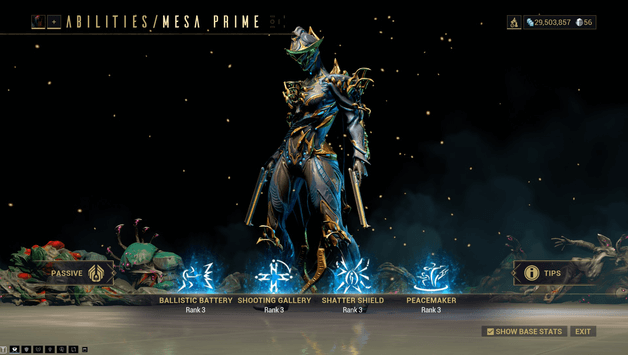 Mesa is capable of charging up powerful shots, boosting the damage of allies and jamming weapons of her enemies, conjure a barrier that reflects and reduces damage and unleash rapid fire upon enemies with her Regulator pistols.

Her passive ability gives her 15% fire rate with dual wielded side arms, 25% reload speed for one handed side arms and an additional 50 health when she has no melee weapon equipped. This ability allows Mesa to store up damage for a shot when activated where she may then use the accumulated damage after activating the ability the second time for the next shot that she fires.

Using this ability can benefit in several ways by charging up your shots during gun fights, before unloading a powerful shot or mixing it all up.

Shots can be powered up very quickly and this can help Mesa get a high amount of damage per second by combining this with your playstyle. 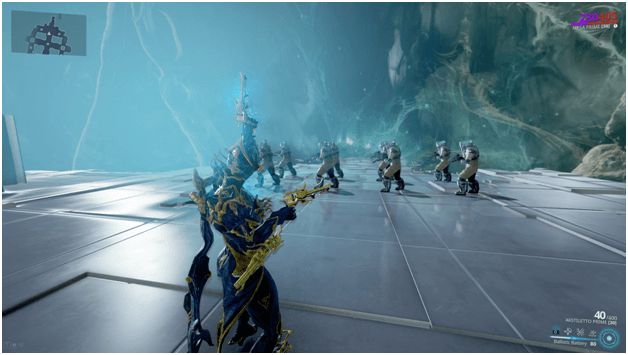 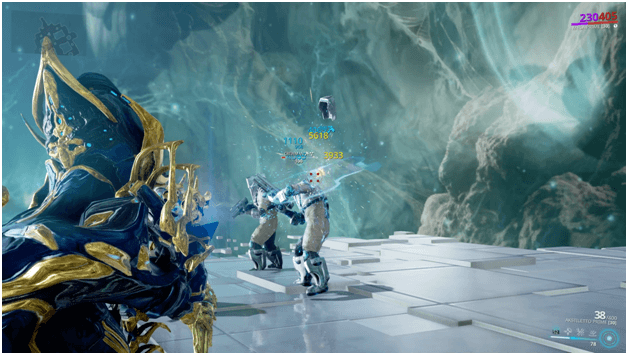 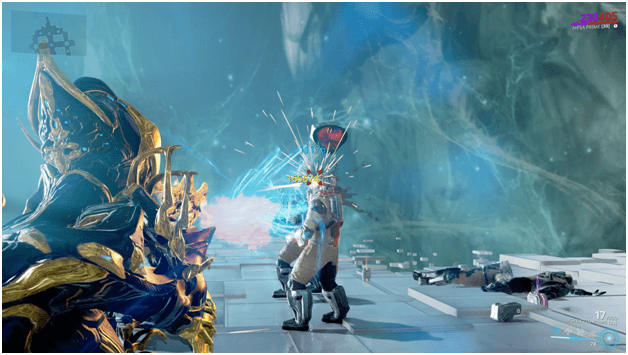 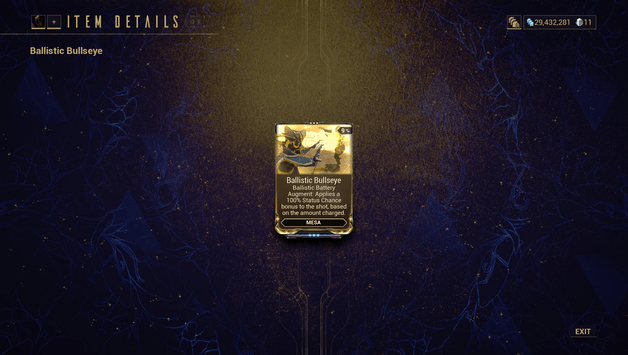 Augment Mod: Ballistic Bulls eye applies a 100% status chance based on the charge of Ballistic Battery. 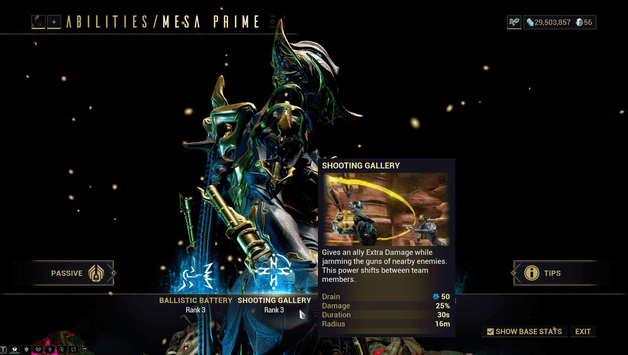 Casting Shooting Gallery give bonus damage while jamming the weapons of enemies, this can effect allies and will jump between multiple team members.

This ability is great for temporarily disabling enemies as well as boosting the amount of damage you or your allies can deal to enemies.

Affected allies will be protected from close range ranged weapons at times since the weapons of enemies that are nearby become jammed every few seconds, allowing more time to react. 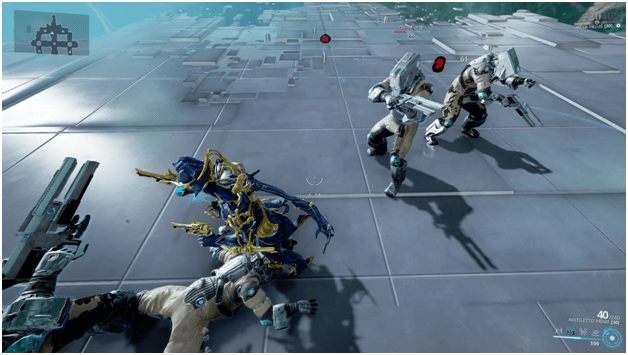 (Mesa near enemies with Shooting Gallery active, jamming their weapons) 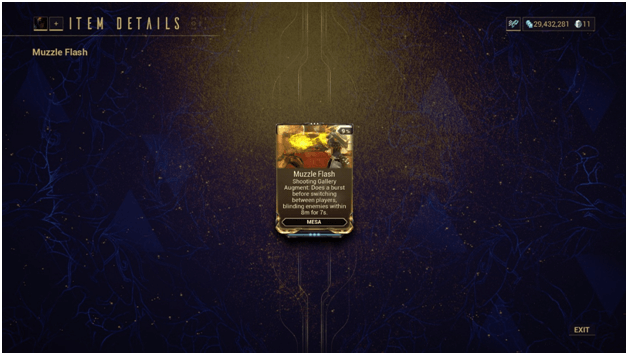 Augment Mod: Muzzle Flash causes a burst to occur before Shooting Gallery jumps to another player which blinds enemies in a specific radius for a period of time. 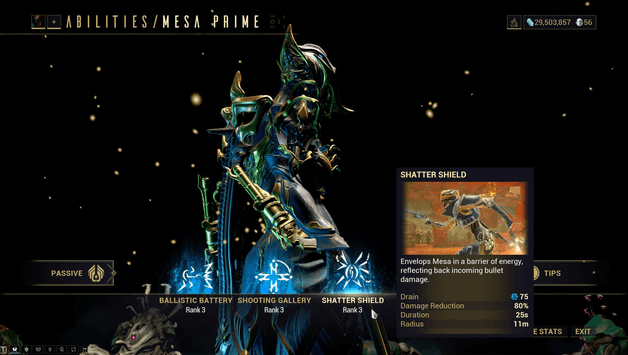 Mesa creates a barrier that reflects bullets back to enemies and reduces the damage that she receives from them.

This ability is vital for survivability as it allows Mesa to withstand damage and treat it as if it were nothing.

Casting Shatter Shield before engaging enemies greatly increases the efficiency where Mesa can deal a damage while remaining unharmed. 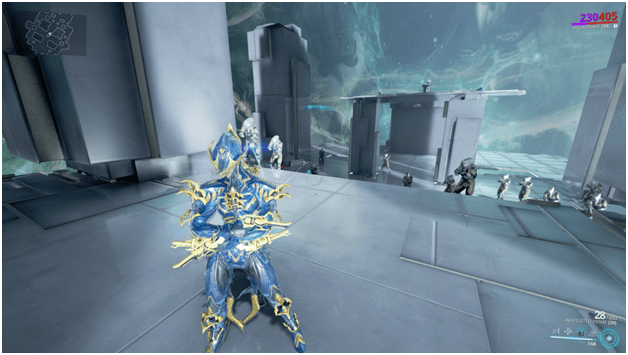 (Mesa with Shatter Shield active, taking little to no damage from enemy attacks) 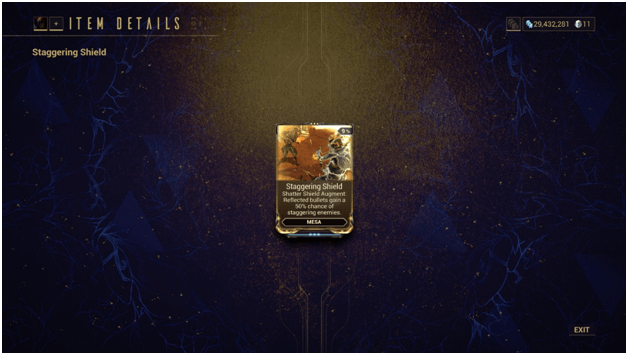 Augment Mod: Staggering Shield has a chance to stagger enemies that damage is reflected upon when using Shatter Shield. 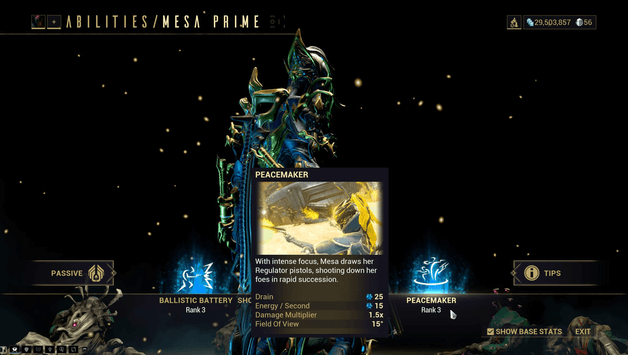 Mesa goes into Peacemaker mode, becoming immobile and drawing out her Regulator pistols to use against her enemies.

A large reticle will be shown on your screen and any enemy inside will be fired upon by Mesa when holding down the fire button.

The longer Mesa fires on enemies, the more damage she will do and the smaller the reticle will get.

This ability is capable of shredding enemies to bits due to the unlimited amount of ammo and the increase in damage per shot making it capable to kill almost any enemy within a few seconds. 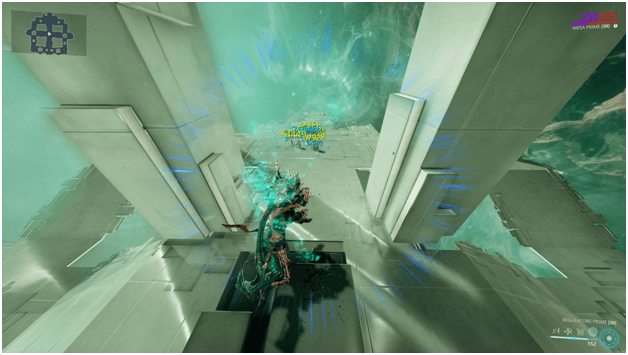 (Mesa firing at enemies with her Regulator pistols during Peacemaker) 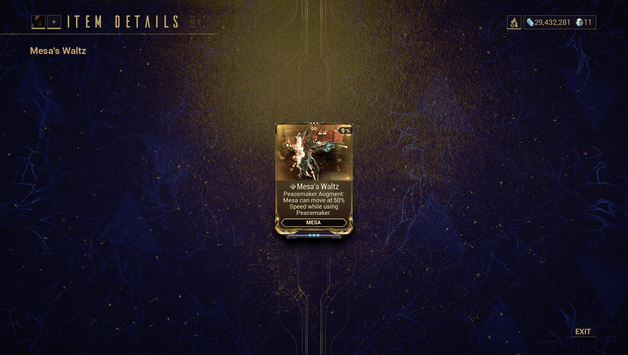 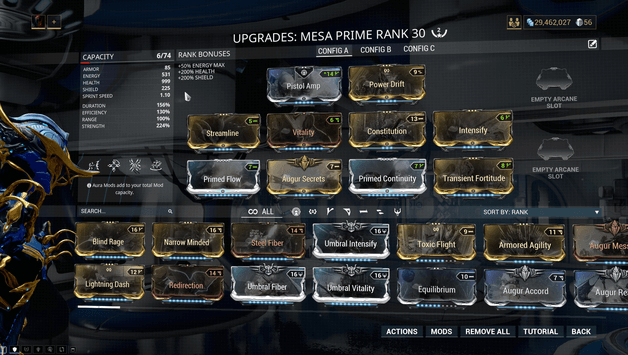 Mesa’s Balanced build aims to allow her to use all of her abilities without any negative effects towards any of the stats.

Duration has been increased by a good percentage allowing the abilities she has to last longer.

This allows here to make use of all of her abilities when she needs them and can be used for many playstyles, making this a comfortable build for both new and experienced players. 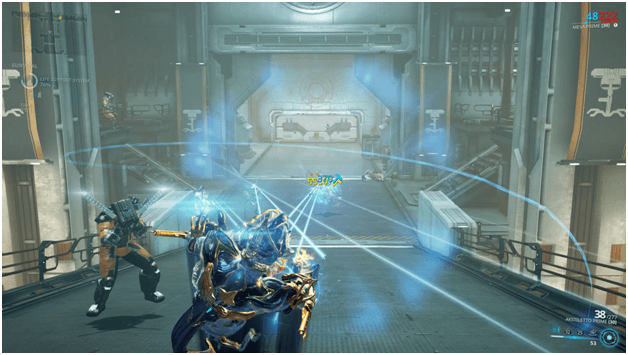 (Mesa using all of her abilities while fighting enemies) 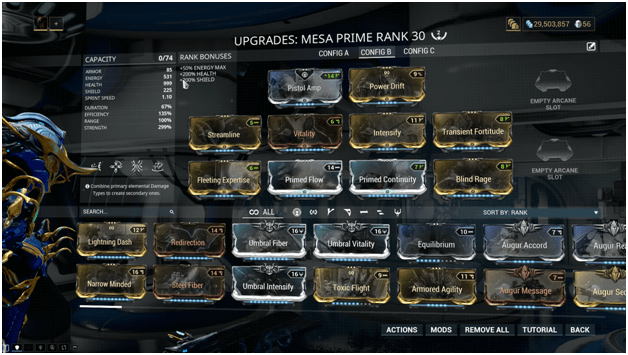 This build focuses on giving Mesa a higher amount of ability strength with a reduction to the duration of her abilities.

The Shooting Gallery and Shatter Shield abilities will have their duration reduced but are still effective during missions.

A lot of damage may be charged up for Ballistic Battery giving a higher damage output and with a higher efficiency, it can be cast more often.

Peacemaker will have a heavy increase in damage and with the increased efficiency, the drain of the ability is balanced enough to make up for the low duration.

Using this build allows you to release a lot of damage and to utilize the effects of Mesa’s abilities which can be really helpful against stronger enemies and harder missions. 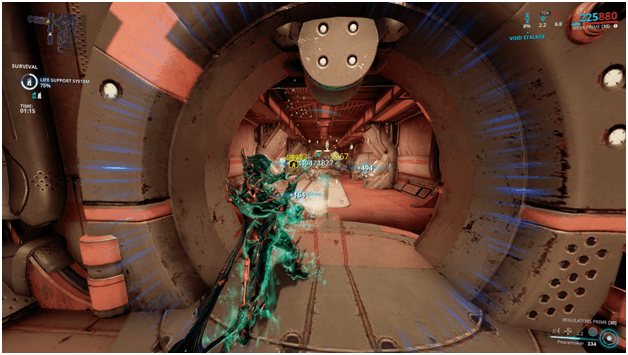 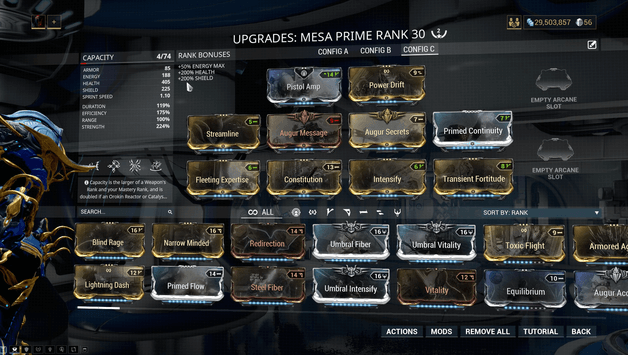 The Efficiency build aims to allow Mesa to use all of her abilities at an extremely reduced cost while also having a slightly increased duration along with a decent amount of ability strength.

This gives all of her abilities a good bonus to the damage and effects they have making Mesa good for dealing damage as well as being protected by her other abilities.

All of her abilities will have low costs in energy making them easily cast from time to time, guaranteeing she can maintain her buffs and frequently charge up Ballistic Battery.

With the increase in efficiency and slight increase in duration, Peacemaker may be activated for a smaller energy cost and the drain becomes very low allowing more damage to be done and a sustained duration for the ability.

This is a very useful build for those who like to use multiple abilities and to make use of them often. 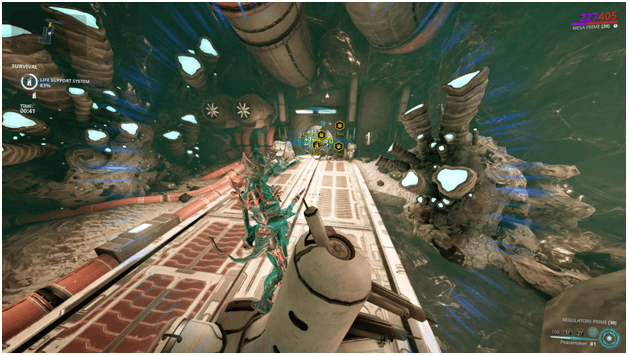 (Mesa with all of her abilities, including Peacemaker activate, killing enemies) 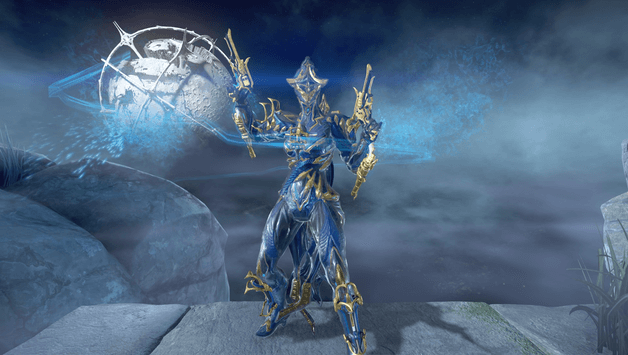 Mesa brings back the old gunslinger vibe to Warframe, giving you the option of using whatever weapons you like to make use of her buffs.

She may appear nimble to some but for those that make use of her abilities, the survivability along with the user’s skill may prove a lot of people wrong as enemies might not even be able to reach Mesa as they might probably die on the way.

Mesa can deal a large amount of damage from very far and can cover large areas making her great for eliminated groups of enemies and even focusing her fire on a single enemy.

When used well, she can remain safe while dealing a high amount of damage per second and can quickly clear up missions of any difficulty.

If you are into gunslingers and extreme ranged combat, Mesa is a Warframe worth getting as you won’t be disappointed with her gun fighting capabilities.