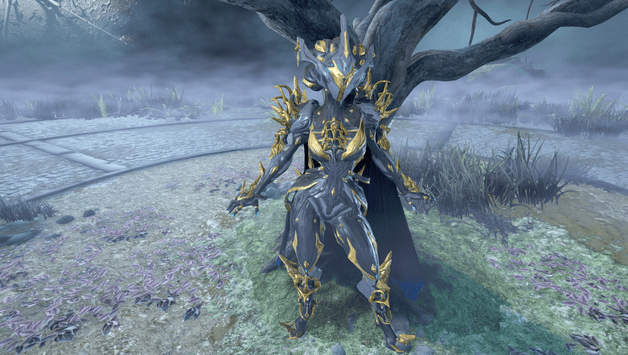 Khora is a huntress Warframe who fights her enemies with her powerful whip abilities alongside her feline companion, Venari.

She specializes in crowd control and damage by trapping enemies with her whip as well as dealing high amounts of damage with it while her companion aids her by unleashing deadly and agile attacks.

How to Get Khora? 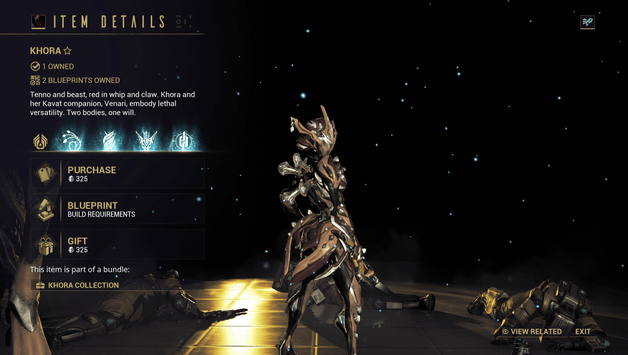 Khora’s blueprint along with her component blueprints are rewards for doing Sanctuary Onslaught missions where each can be acquired depending on the rotation.

She may also be purchased for 325 platinum which will provide you with the fully built Warframe. 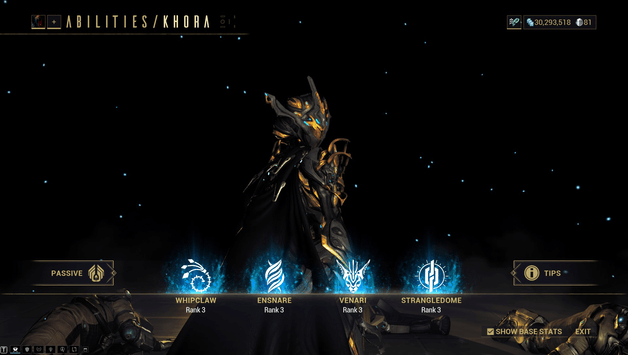 Khora has the ability to unleash powerful strikes with her whip, cause countless enemies to be entrapped, command her feline companion and unleash a massive trap to bring death to her enemies.

His passive ability allows her to fight alongside her companion Venari who has its own mods, stats and special attacks.

Having Venari around her and alive will give Khora a movement speed bonus.

Venari may be upgraded with mods and customized via editing in the appearance menu. 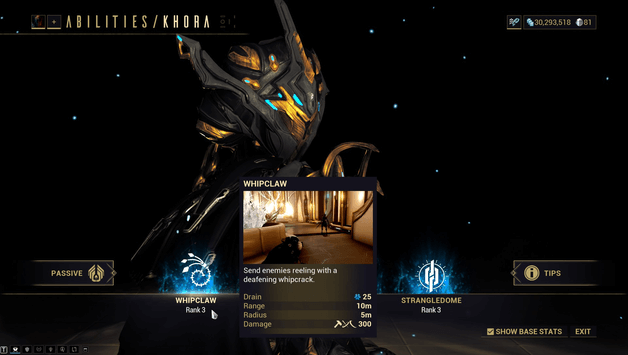 Khora uses her whip to deal a powerful attack where your reticle is targeting which deals a large amount of damage to an enemy as well as damage around it.

Damage can be increased depending on what mods Khora has equipped not only as a Warframe but her melee weapon as well.

When used on enemies that are affected by Ensnare, this ability will deal 200% more damage and its effect will be spread towards other enemies, trapping them and pulling them in as well.

Enemies caught in the her Strangledome ability will share 50% damage from any enemy who is struck by Whipclaw within the same Strangledome.

This is of Khora’s strongest abilities as it deals a large amount of damage which is boosted by several conditions such as weapon mods, abilities and more. 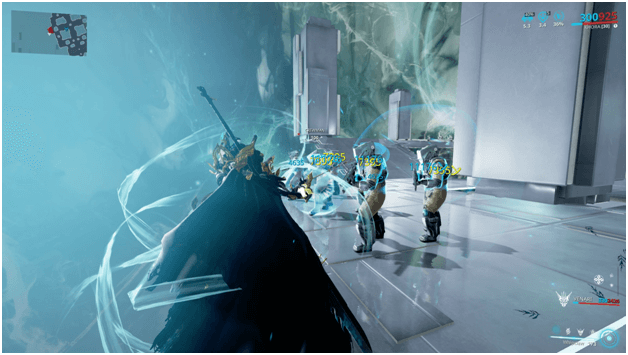 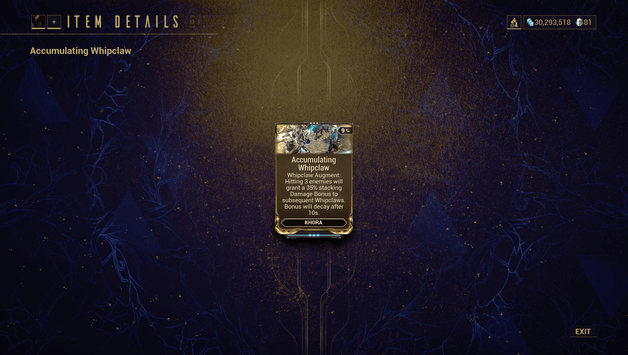 Augment Mod: Accumulating Whipclaw gives an increase in damage which stacks when 3 enemies are hit which decays over time. 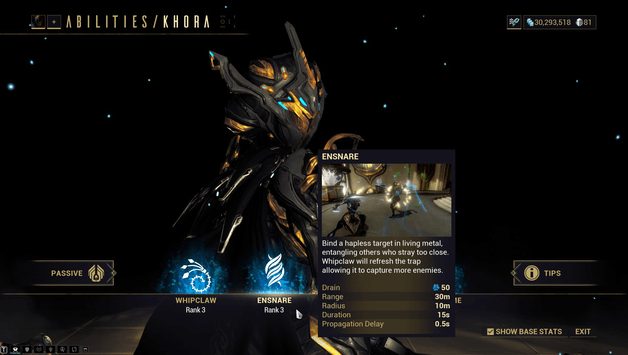 Khora binds an enemy preventing it from moving which also causes enemies near it to be affected as well, making all affected enemies vulnerable for a period of time.

Using Whipclaw will cause nearby enemies to be affected as if the ability was recast, ensnaring them as well.

Enemies that are affected by Ensnare will receive 200% more damage when they are hit with Whipclaw.

This ability allows Khora’s to easily deal crowd control as well as make enemies more susceptible to her Whipclaw ability. 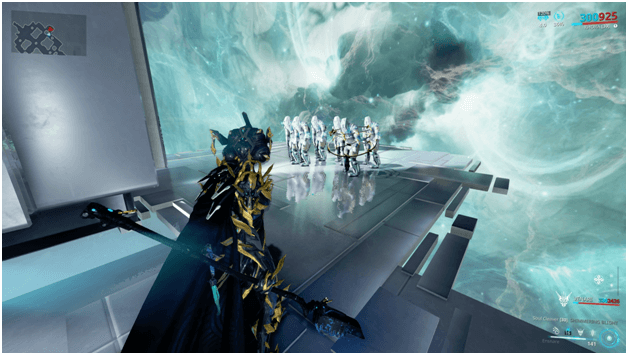 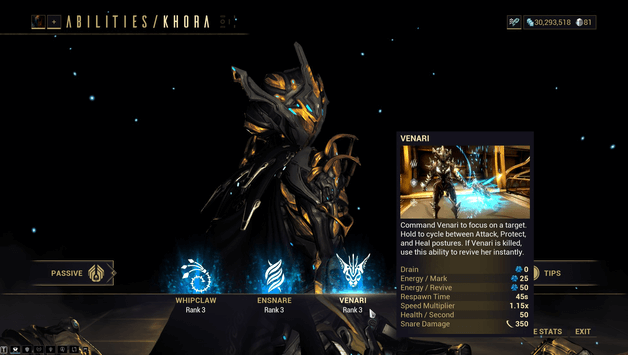 Venari will always be at Khora’s side but this ability allows Khora to give Venari certain commands which will allow players to use Venari more strategically as well as modify their attacks.

When commanded using this ability Venari is capable of the following:

Khora’s companion alone was already strong and with the addition of these commands, Khora and Venari become a very deadly combo as well as strategic duo. 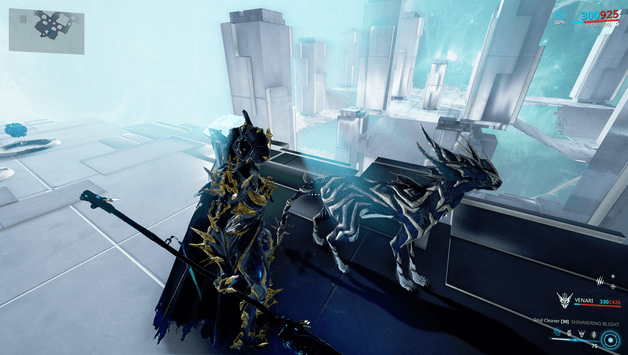 (Khora standing next to Venari) 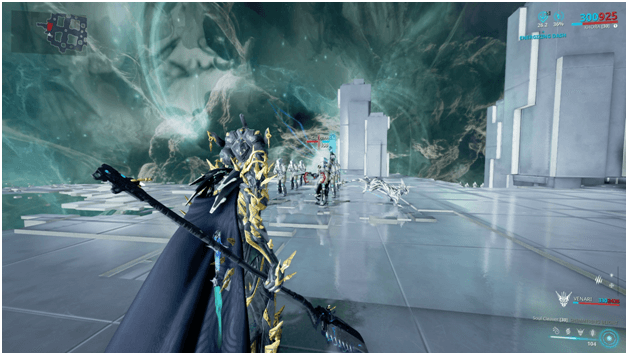 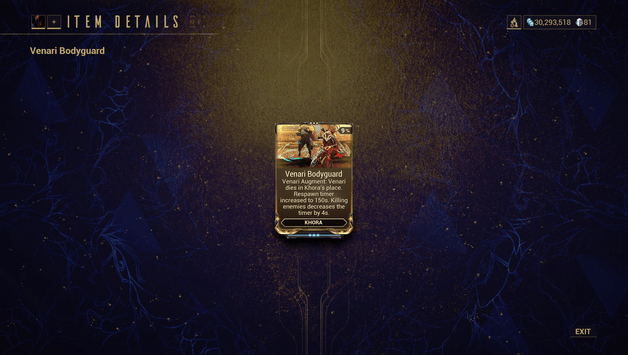 Augment Mod: Venari Bodyguard causes Venari to die in Khora’s place with an increased respawn timer which can be decreased by killing enemies. 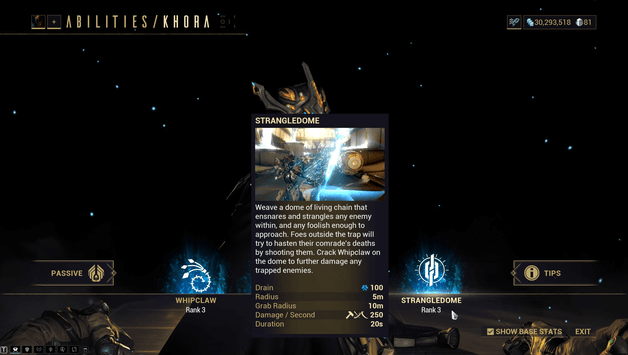 Khora summons a dome of living changes that ensnare targets and begin to strangle them while enemies will be forced to fire on their allies that are ensnared.

Enemies that are caught in the chains will take damage over time aside from being attacked by their allies.

If Khora hits an enemy with Whipclaw while they are affected by Strangledome, any other enemies within the dome will take 50% damage from the ability as well. 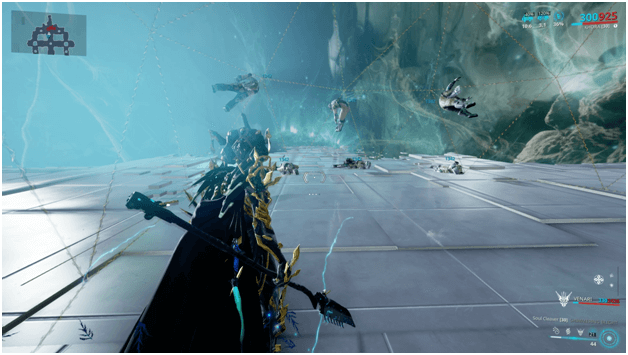 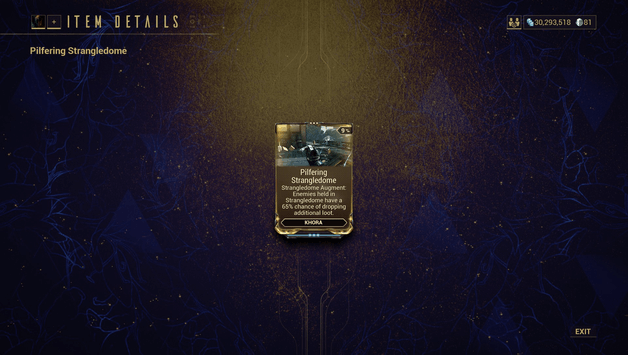 Augment Mod: Pilfering Strangledome causes enemies held by the dome to have a 65% chance of dropping additional extra loot. 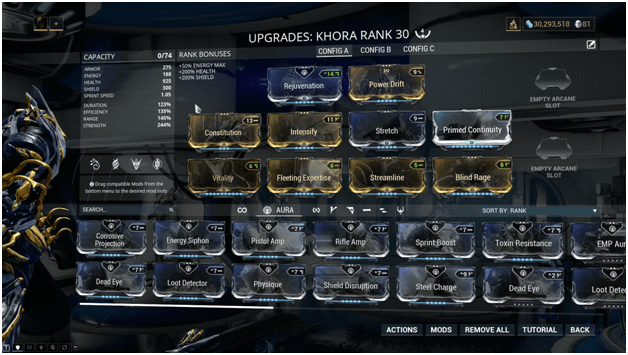 The Balanced Build gives a well balance of stats to make sure all the abilities may be used efficiently without any negative effects happening.

Khora’s abilities will deal a decent amount of damage while having an increased duration along with a larger range, making her abilities reach further.

This build works best for new players or players that need a basic build to use or get ideas from. 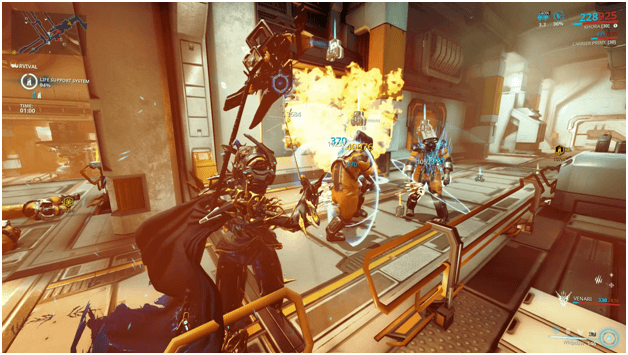 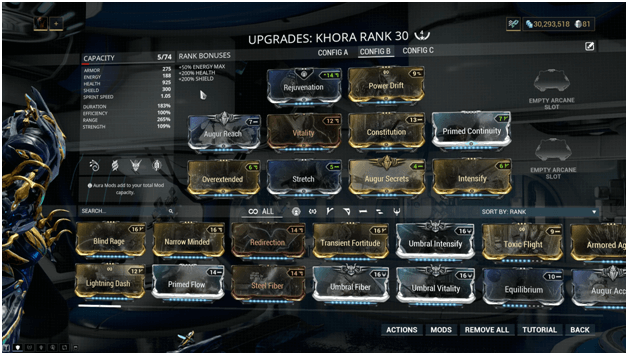 The Range Build focuses on crowd control as it has an increase in mainly range and duration with a very small increase in ability strength and no change in efficiency.

This is mainly used to disable enemies but can prove effective due to the amount of enemies that are vulnerable and the ability to combine abilities and reach enemies from a far distance.

Using this ability goes well with a team, allowing them to take advantage of the enemies that are disable by Khora’s Ensnare or Strangledome.

Ensnare will spread to more enemies while Strangledome will cover a larger area and using Whipclaw can be done from a far distance. 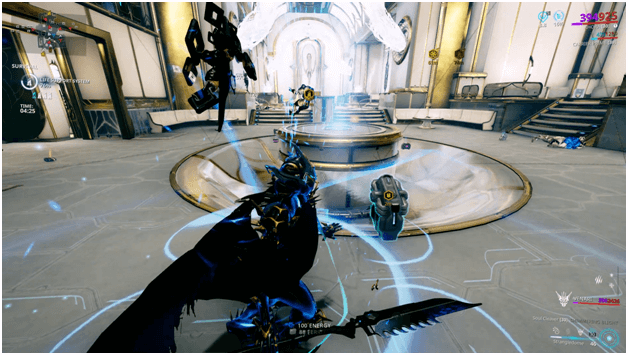 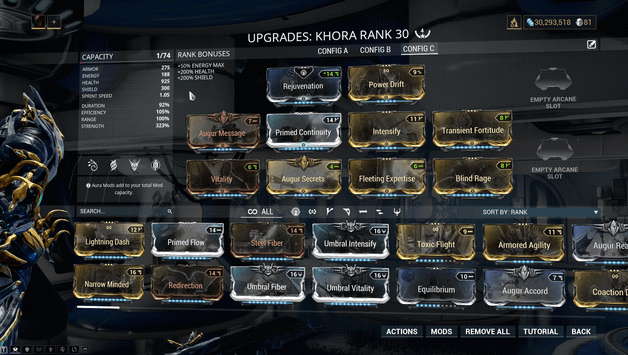 This build is mainly used to dish out a heap of damage with a very high amount of ability strength as well as a slightly increased efficiency.

All of Khora’s damage abilities will be greatly affected which will not only allow Whipclaw and Strangledome deal damage but also Venari’s damage as well.

Since Khora’s abilities have synergy such as Ensnare and Whipclaw, even greater damage can be done due to the high amount of strength in the build.

This build is great for taking on enemies that are hard to kill since a lot of damage can be done aside from the crowd control. 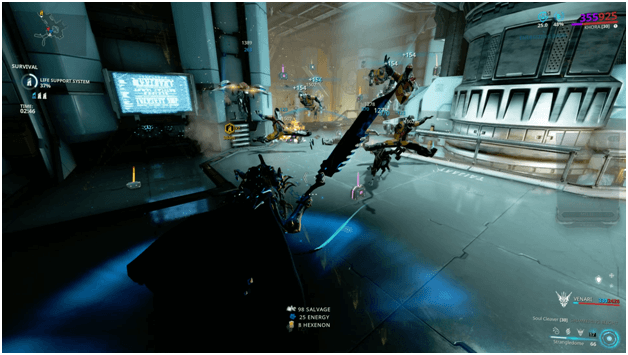 (Enemies getting killed by Strangledome ability) 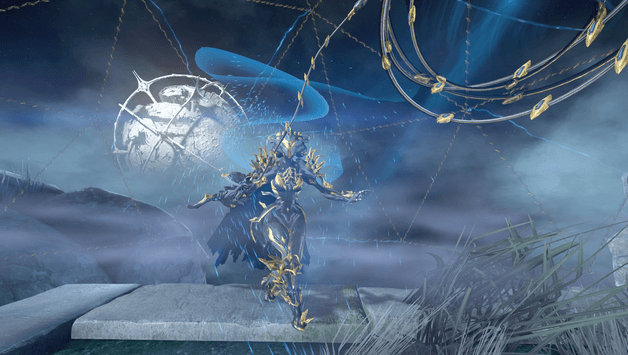 Khora is one of the deadliest crowd control Warframes around but this doesn’t necessarily mean she is only for crowd control or support.

Along with Venari, she is capable of dealing severe amount of damage by simple making use of her abilities and combining them for intended effects.

With her high amounts of damage and her ability to disable enemies and pull them together for easier killing, Khora makes groups of enemies suffer greatly with ease.

Venari compliments Khora in many ways and is very effective in taking enemies out.

This huntress can pack a lot of damage with a team or without one and she can do a good job when it comes to taking on groups of enemies.