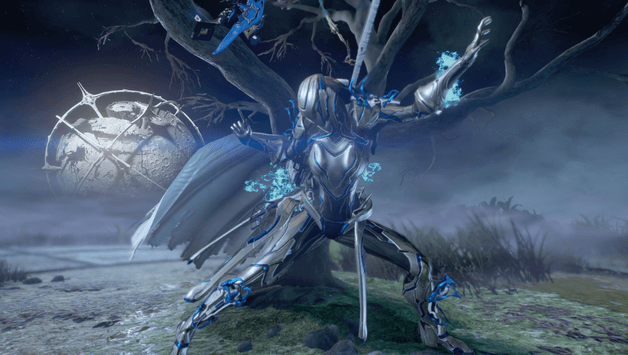 Trinity is a support Warframe who focuses on keeping the team alive and protected as well as well prepared for fights.

She is known well to be one of the greatest support Warframes and turns the odds greatly when it comes to difficult missions as well as boss fights.

How to Get Trinity? 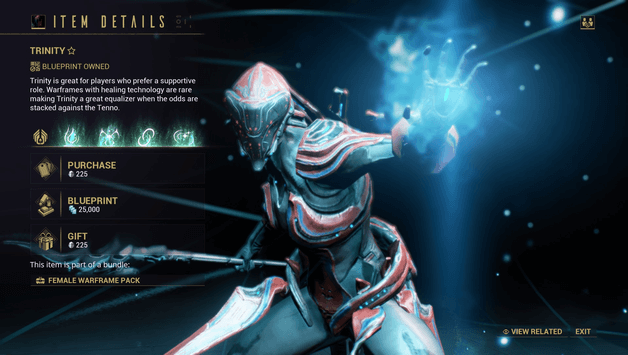 Trinity parts may be obtained from Ambulas by doing the Hades mission on Pluto..

Her blueprint may be bought from the Ingame market on the orbiter for 25,000 Credits.

She may also be purchased already built for the amount of 225 Platinum. 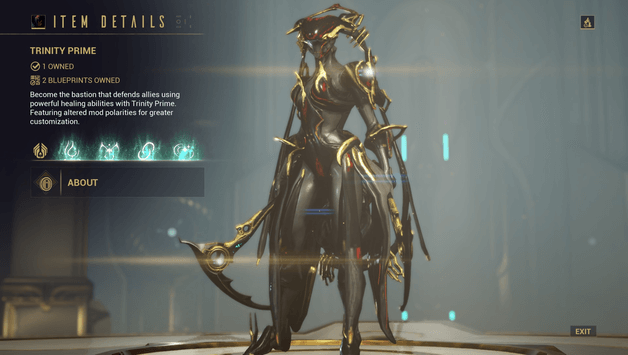 Trinity Prime is the prime variant of Trinity and has a higher amount of shield and sprint speed. 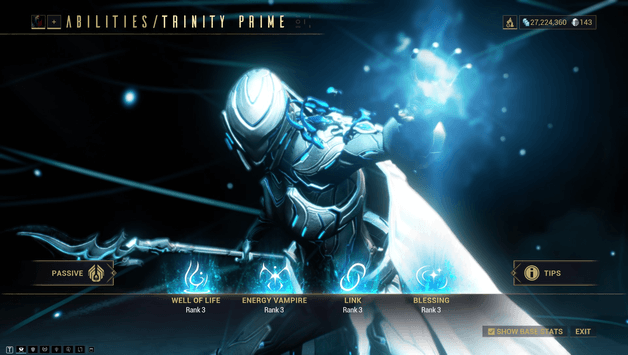 Trinity has the abilities to force enemies to give her allies life and energy, negate damage and pass it on to enemies, protect and heal her allies gracefully.

Her passive ability is Triage, which allows her to revive allies 25% faster at an increased distance by 50%. 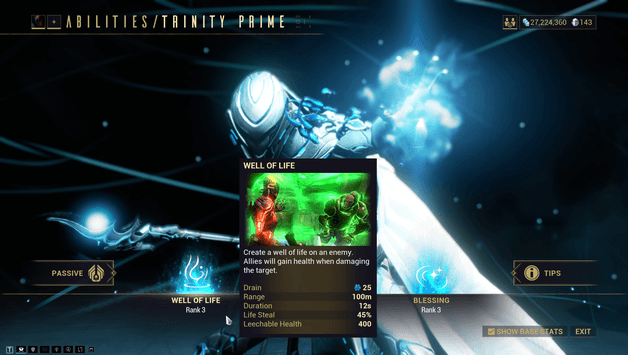 Trinity causes an enemy to be suspended in the air, helplessly unable to fight back while life is stolen from it and given to Trinity and her allies nearby

When damaged by Trinity and her allies, health is restored to them based on a percentage of the damage they inflict.

This ability is great for disabling an enemy as well as healing allies, granting more survivability for Trinity and her team. 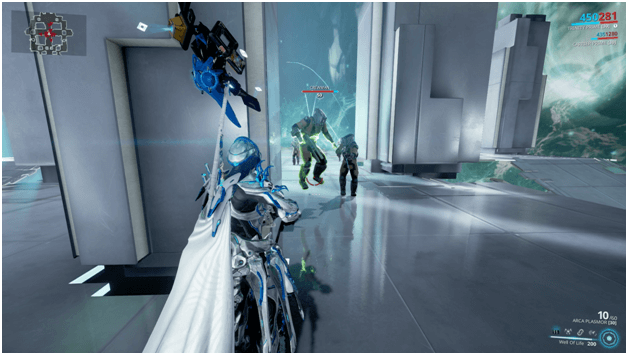 (Trinity using Well of Life on an enemy) 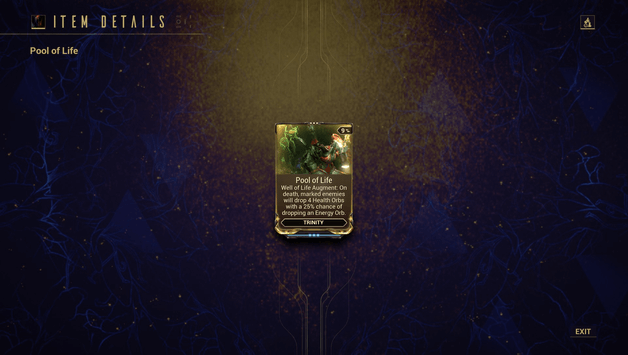 Augment Mod: When a marked enemy dies, they will drop 4 health orbs with a chance to drop an additional energy orb. 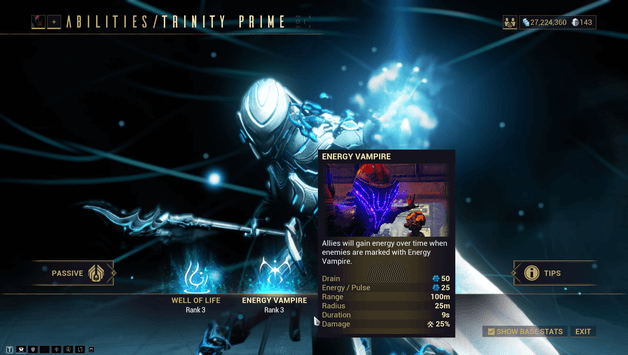 Similar to her first ability, Trinity marks an enemy but instead of being suspended in the air, they become stunned and provide energy in an area for herself and her allies.

This is one of Trinity’s most known spells as she can support the whole team by granted them limitless energy to be used in missions as long as there is an enemy.

The enemy will send out pulses of energy to allies over time granting them a certain amount of energy per pulse.

If the enemy is killed, they will release a pulse giving all of the energy that was meant to be sent out per pulse in a single pulse.

This ability does not only help the team out by supplying everyone near the targeted enemy with energy but it also allows Trinity to cause an enemy to be vulnerable and unable to attack. 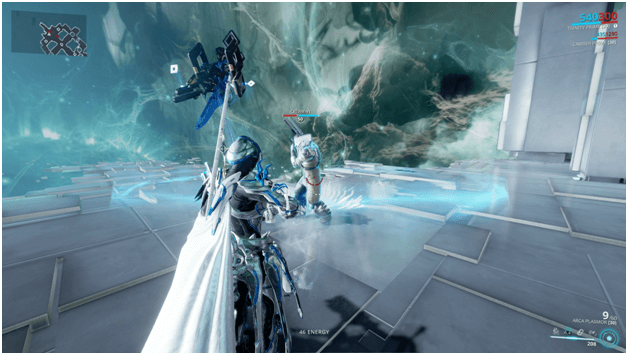 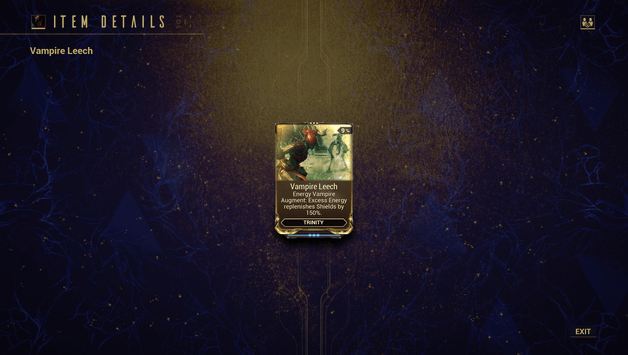 Augment Mod: Vampire Leech causes Energy Vampire to replenish shields by 150% along with the energy that it restores. 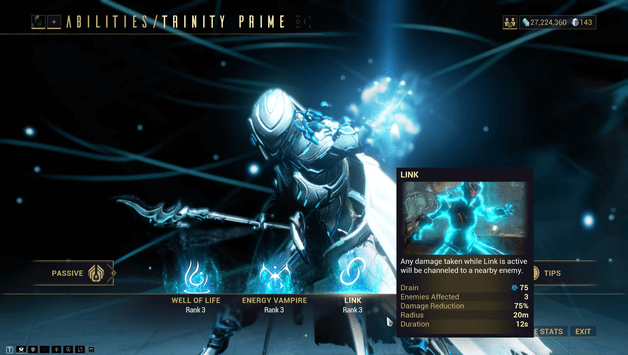 When this ability is activated, Trinity creates a link between her and her enemies, causing a percentage of damage deal to her to be reduced and reflected to the enemies she has created links with.

This ability is great for both making Trinity more durable as well as dealing damage to enemies giving here more survivability and enabling her to have another source of damage to send out to enemies.

Using link can benefit Trinity as it goes well with her Blessing ability and will give her more protection against damage, allowing her to last longer during missions or boss fights. 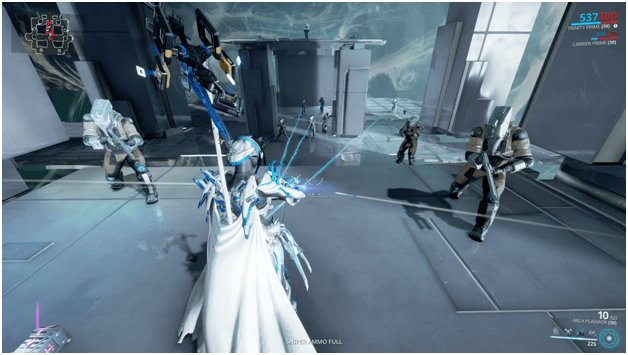 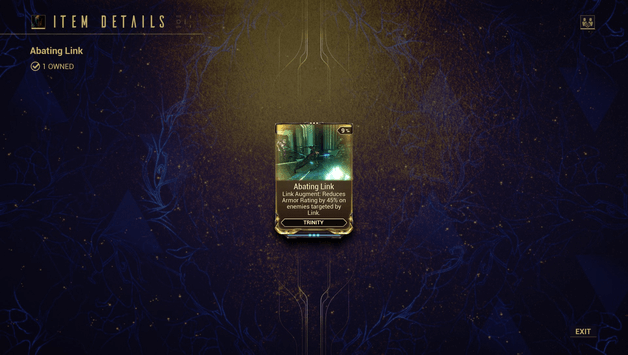 Augment Mod: Abating Link reduces the armor of enemies that are affected by the ability by a certain percentage. 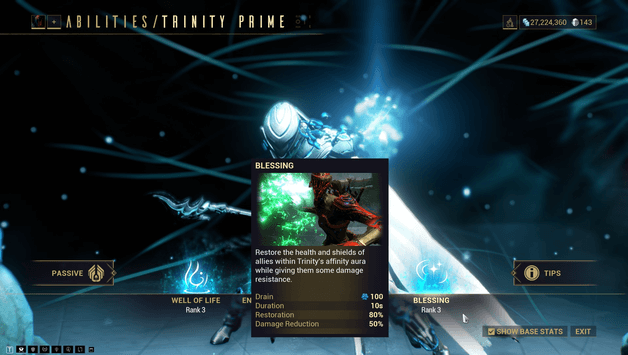 Upon casting the ability, Trinity and her allies will be blessed with her powers, instantly healing them for a percentage of their health and shields as well as granting them increased damage resistance for a period of time.

This ability may be activated regardless if the ability is still active, meaning Trinity can repeatedly heal her allies as long as she has enough energy.

Being one of her best abilities that she is favored for, Blessing has become a huge help with many missions as well as boss fights and many teams search for a good Trinity to use this to support her team. 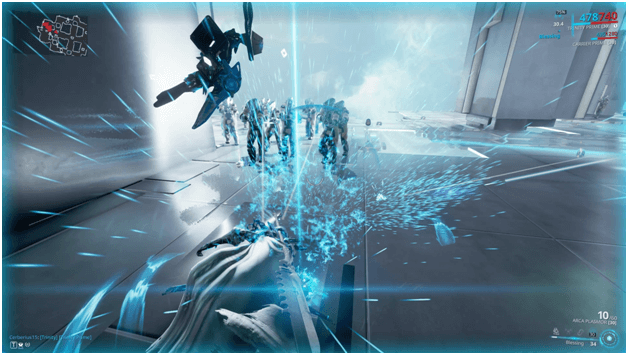 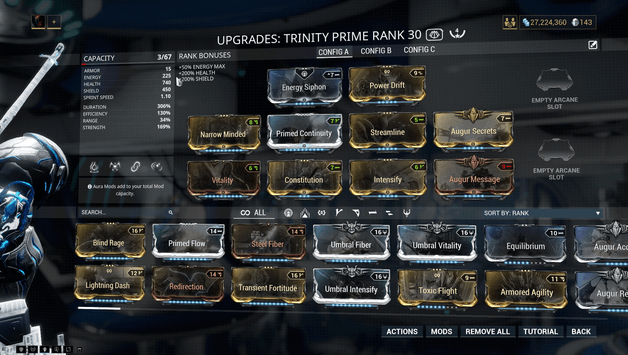 With the Blessing build, Trinity focuses more on supporting her team with the Blessing ability which aims to heal them when necessary and buff them with damage resistance so they may survive.

This is very useful for boss fights and missions where enemies deal extensive amounts of damage that may be hard to overcome.

Her other abilities will be usable but range will be reduced and if using abilities such as Energy Vampire, she must time it right by casting on enemies near her allies.

The same goes with Well of Life as the range is reduced she must target an enemy where her allies are, most likely a defensive spot.

Link may still benefit her as the damage reduction helps her survive any other encounters with enemies as it can stack with bless making her more durable throughout the mission. 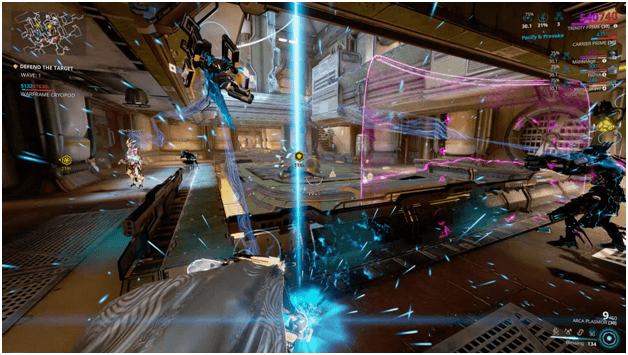 (Trinity healing and buffering the whole squad with Blessing) 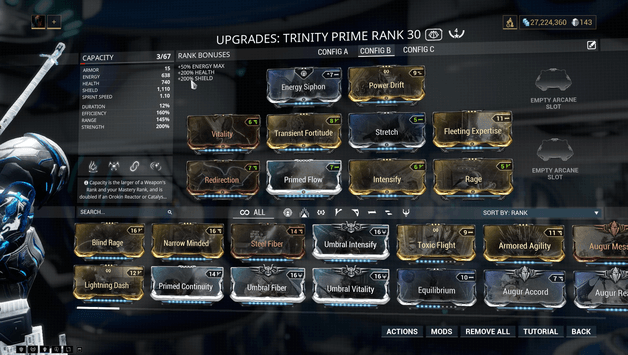 This build focuses on the use of the Energy Vampire ability which will quickly end and release the full amount of energy intended within less than a few seconds.

The added range on the ability will increase the radius of which allies may receive energy from the pulse and timing will not be required as much since the ability will almost instantly create an instant pulse of energy regeneration.

Efficiently has been increased in order to allow Trinity to repeatedly cast her abilities in order to use Blessing and Energy Vampire when required to assist her allies and herself.

With the heightened ability strength, the energy, health and shield restoration will regenerate more when her abilities are cast with the disadvantage of Blessing not lasting long to give a defensive buff.

This build is best used when Trinity has allies that are energy dependent and would require large quantities of energy to handle the mission. 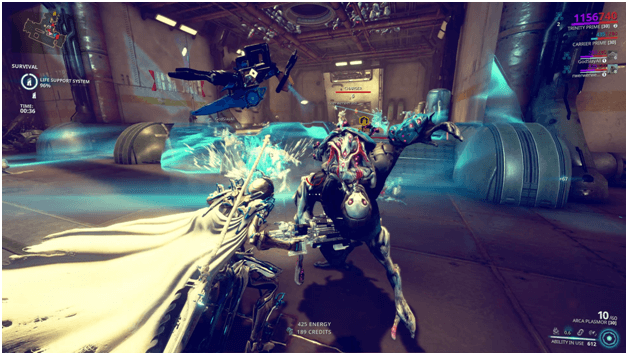 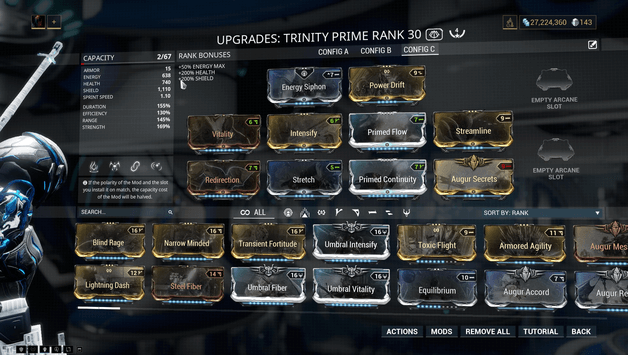 Unlike the other builds, the Balanced build offers the opportunity to cast all of her abilities without any reduced ability qualities.

This allows Trinity to fairly cast her abilities to benefit her and her team with enough support that can provide helpful in multiple situations.

She will be able to cast all of her abilities and can make use of this build on any mission as this build can support several types of other Warframes that she may be teamed up with. 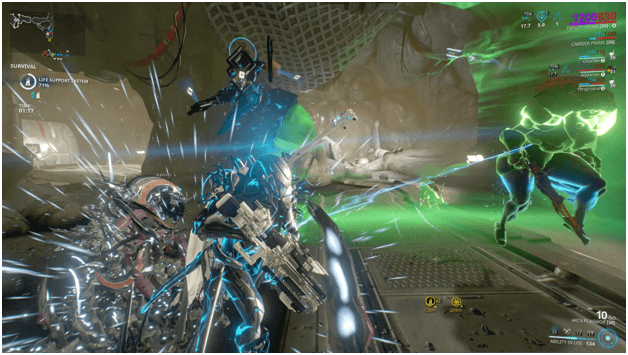 (Trinity using several of her abilities) 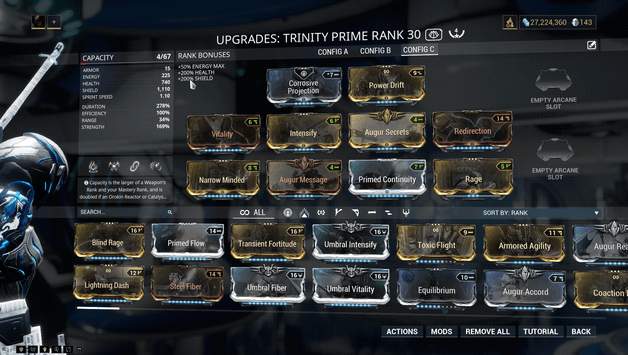 Taking the role of being support to a more offensive role, Trinity may use this build to not only support her allies but also sustain her health, energy and shields as well during missions.

For those who prefer to be more initiative with fights or that like to be in the front of the battle such mid-range and melee fighters, this build allows Trinity to freely be in combat as well as give her the ability to sustain herself and her allies.

The downside of the build is lack of range which means Trinity will need to make use of her weapons in order to force Energy Vampire to deal its full amount of energy restoration.

Using her Blessing and Link abilities will greatly improve her survivability while Rage will allow her to have a good source of energy if needed. 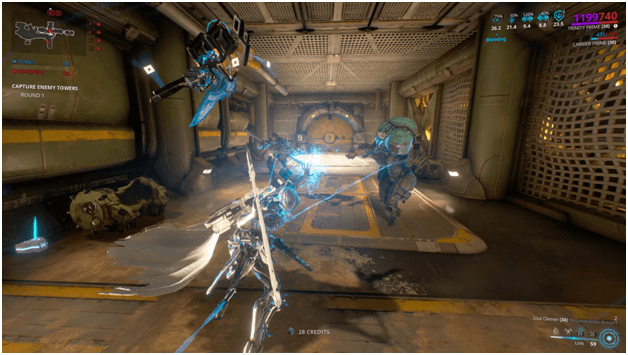 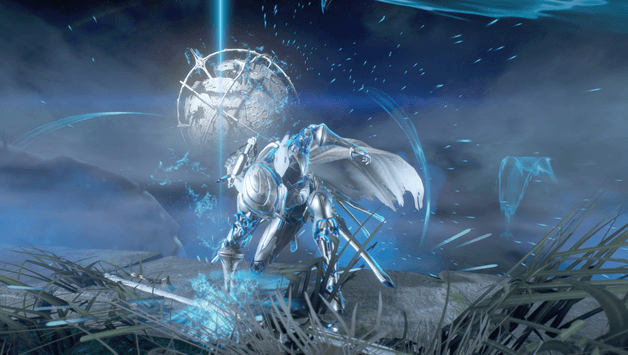 Trinity is one of the best support Warframes in the game due to her ability to heal both shields and health of herself and allies.

Aside from her providing regeneration for her allies, the usage of Blessing can greatly affect the outcome of missions and boss fights greatly and with this her team has a greater chance of victory.

Due to her abilities granting more resistance to damage she may utilize this to become more durable and may even be able to draw fire from enemies, giving her team the advantage of staying safe.

Having Trinity on a squad where Warframes that are dependent on energy becomes very situational as some Warframes may clear levels easily when provided with limitless energy.