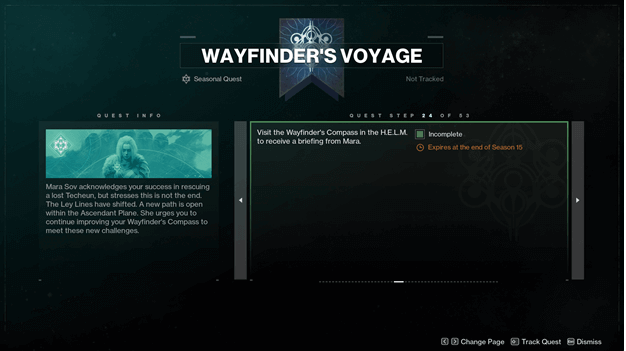 The arrival of Week 4 in Destiny 2 Season of the Lost continues the season by bringing step 24 to step 30, allowing you to progress further.

After completing this quest, you will be rescuing yet another Techeun and will once again get another upgrade for the Wayfinder’s Compass.

While Week 4 is a few steps shorter than the previous one, you get to understand more about Savathuns feelings during the story and unlock another upgrade.

Returning for Week 4, another Techeun is to be found and you will need to head over to the Wayfinder’s Compass to get briefed by Mara.

You will need to form an Astral Alignment to help locate the next Techeun, team up with others to complete it to proceed.

The Astral Alignment boss for Week 4 is Kruutiks, Reefbane and just like your previous encounters with him, you will need to follow the same routine.

You will need to collect Parallax Trajectory to proceed with the next step, this is to prepare you for upgrading your Wayfinder’s Compass later.

The Wayfinder’s Compass has tracked down one of the lost Techeuns, it is now time for you to enter the Shattered Realm and rescue her.

Bringing back the Techeun successfully will unlock another ability that will become available at the Wayfinder’s Compass.

The Barrier ability called Enhanced Breach is available once you have rescued the fourth Techeun, head over to the Wayfinder’s Compass and unlock it.

Once you have unlocked the Enhanced Breach ability, head over to Savathun to speak with her, which will be in Mara’s Chambers.

This marks the end of Week 4, while it may not have as many steps as the previous Wayfinder’s Voyage quests, there will soon be more to be unlocked so be ready.