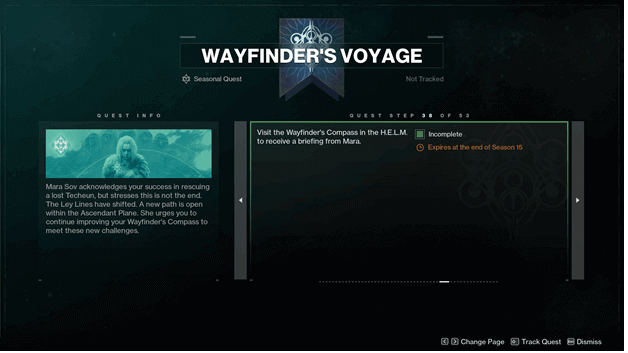 The sixth lost Tacheun is somewhere out there and it is up to you to once again make the necessary preparations and find her.

As you progress further to closing in on your goals with Savathun, Crow begins to become uneasy and starts to becomes less patient.

During this part of the Wayfinder’s Voyage, things start to become more intense and you also begin to further upgrade your compass.

Step 38: Head to Wayfinder’s Compass to be Briefed

As the sixth lost Techeun is to be found, you will need to be briefed first before you prepare to find her later on in the Shattered Realm.

To find the whereabouts of the lost Techeun, you will first need to perform an Astral Alignment with other Guardians.

Collect the necessary amount of Parallax Trajectory which will prepare you for steps later when you upgrade your compass.

This can be done by participating in activities, mainly Crucible and Gambit as these are some of the fastest ways.

Parallax Trajectory may also be obtained by collecting Ascendant Shards or defeating enemies.

The sixth lost Techeun has been found and is being held in the Debris of Dreams Shattered Realms, which you must complete to rescue her.

Once the sixth lost Techeun has been rescued, you will need to unlock the Astral Attunement ability, which is unlocked once you return from the Debris of Dreams.

Crow can no longer hold in his feelings and is headed for Savathun, you will need to head over to the Chamber to witness the event.

Once Savathun and Crow have finished conversing, you will be next in line to speak to Savathun, who will explain her actions.

Savathun has revealed something to Crow which deeply upsets him and Savathun explains to you that someone had to tell him.

Crow is still angry about finding out about his past, as Savathun had revealed it to him and this weighs heavily on him.

Week 6 ends after you have spoken with Crow, who is still taking everything in after having what appears to be his memories of his former self restored.