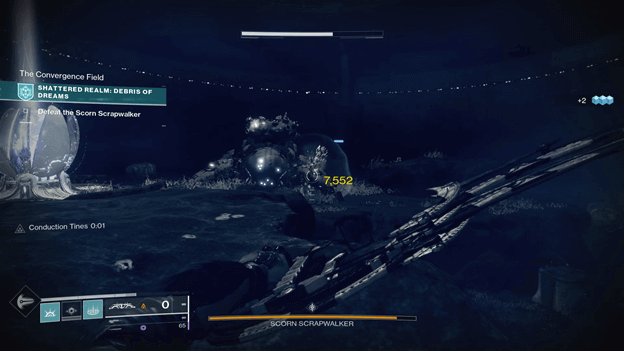 Similar to the first of the Shattered Realms, you will need to search for another Tacheun who has been lost or possibly kidnapped.

You will need to traverse and find your path from the observatory and cross several gaps to reach the lost Tacheun.

As you progress through this Ascendant Plane, you will encounter several Scorn enemies and will have to fight through them to find the Tacheun.

Begin the mission by stepping through the portal at the end of the hall, which will take you into the Ascendant Plane.

From the portal, there will be a path going to the left through a large gate, which is a different direction from that of the other Shattered Realm.

Continue making your way through the Ascendant Plane and follow the waypoint which will send you in the right direction.

Follow the lanterns as they will lead you to the beacons which you will need to align, which will allow you to progress further.

Make your way towards the beacons that you will need to align, and continue following the lanterns if you are unsure of the way.

The first beacon will be in one of the round structures, guarded by a few Scorn enemies that you should easily take out.

Interact with the beacon to align it and get ready to defend yourself against waves of enemies until the combatants defeated reach 100%.

Once the enemies have been defeated, you will be able to make your way to the next beacon that needs to be aligned.

After defending the beacon and successfully aligning it, make your way to the next beacon by going around from the exit and jumping down to a lower floating piece of land.

Proceed following the lanterns that will bring you to the next beacon but watch out for the Screebs as they are fast and explode when they reach you.

You will find yourself in what appears to be the remains of a destroyed building or facility and the beacon will be in plain sight.

Align the beacon and defend it from the enemies that attack you, which will continue until all of them have been killed and you have reached 100%.

Follow the next set of lanterns which lead you into a tube-like structure and continue going up where you will head to the left and find a teleporter at the end after exiting.

The teleporter will be outside of the structure and on a circular platform, which teleports you to the third beacon.

Interact with the beacon and a boss fight will begin with a Scorn Scrapwalker appears, which you must then fight.

The Scorn Scrapwalker may be a bit tough but you should be able to beat it after a while, it does have weak spots which you can target.

Once you destroy the plating on its legs, it will become weakened and will afterward open up another weak part for you to deal extra damage to it.

After you have defeated the Scorn Scrapwalker, head over to the waypoint which points to the location of a crypod-like object, where you will be able to call out to the lost Techeun.

Once the Techeun has been rescued, the mission will come to an end after a short conversation between Mara Sov and Saint-14. 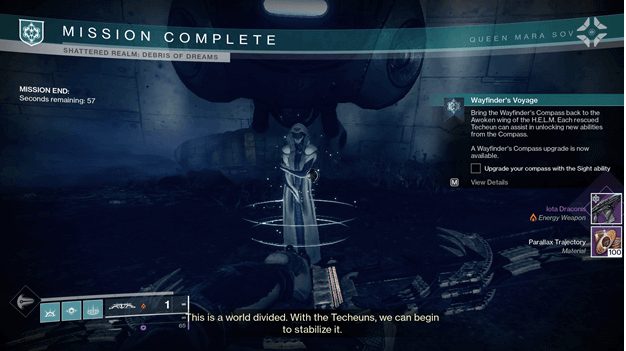 With the Scorn Scrapwalker defeated and the beacons aligned, Xivu Arath’s forces will be in retreat, and this will be another victory for you.

You have saved another Tacheun and will be able to safely bring her home as instructed by Mara Sov, ending the mission afterward.

Saint-14 and Mara Sov will have a conversation, showing Saint-14’s concern for the return of Osiris as well as his threat to Mara Sov if he does not make it back safely.