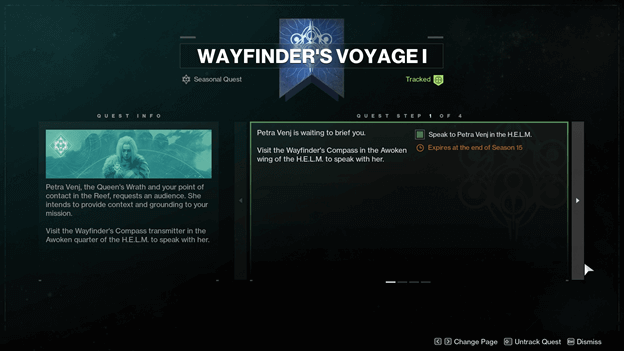 The Wayfinder’s Voyage I Quest is the first of many that you will partake in during the Season of the Lost (Season 15) in Destiny 2.

This quest becomes available after the introductory mission known as Mission Cocoon, which is started right as you begin playing after the update.

During this quest, you will be introduced to several new activities that will occur in Season 15 as well as an addition to more of the story.

Petra Venj appears to have close ties with Savathun and you will need to report to her first before you can proceed with the quest.

You will be able to find her by heading to the HELM and going towards the right (should be marked by the waypoint it tracked) where a new room now exists.

You will need to complete the Offensive: Astral Alignment mission which can be accessed in the destinations tab and selecting Dreaming City.

This will be the first time you do this mission and it will be done in a team of 6, requiring you to complete it to proceed to the next step.

The mission called Decrypting The Darkness will have to be completed before you can continue with the next steps.

You do not have to complete this mission if you have already finished it in the previous seasons and this step will be checked instead.

Now that the Blind Well has been aligned with the Shattered Realm, you will need to head back to Petra Venj to plan out your next move.

Head to the HELM and interact with the Wayfinder’s Compass, and you will be rewarded with the IOTA Draconis Fusion Rifle.