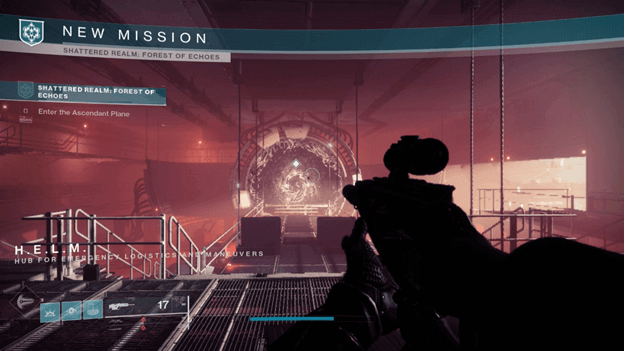 One of the Techeuns has been lost and it is up to you to find them within the Forest of Echoes, one of the Shattered Realms that you have access to.

To find the Techeun, you will have to follow a path, lit by lanterns and light up beacons which will allow you to progress further into the Ascendant Plane.

In the Forest of Echoes, you will mostly find yourself in what appears to be the remains of a forest, church, and a mausoleum of sorts along with other strange ruined structures. 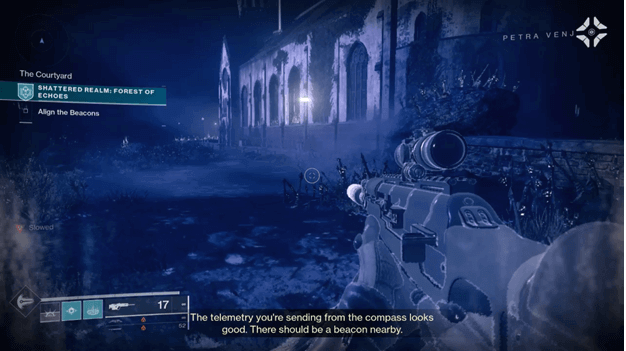 After the quest starts, you will find yourself in the H.E.L.M. where a portal is opened, which leads to the Ascendant Plane.

Make your way towards the portal and proceed heading inside of it to arrive on the other side to start your search for the lost Techeun.

This objective is pretty much the whole point of you entering the Ascendant Plane and will only flash for a while until you move forward.

You will need to align the beacons that are located within the Ascendant Plane that you are in, which are scattered around the area.

By following the floating lanterns, you will be able to find the right path and make it to the inner land, but from this point, you will already see the first beacon.

Each beacon will have a bright beam that goes straight up, which will show where you need to go in the Ascendant Plane.

Make your way to the first beacon, which is inside a church-like structure almost in the middle of the first area, which you will need to interact with.

After you interact with the first beacon, enemies will begin to spawn into the area, a mixture of different kinds which will all attack you.

Defend the beacon until you have defeated all the combatants, which is represented by a percentage displayed in your objectives.

After successfully defending the beacon, it will be aligned and you will then need to exit the building and follow the next set of lanterns.

If you cannot see the lanterns right away, you simply need to exit the building and look around for the next beacon which can be spotted by looking around for its beam.

Once you know the direction to the second beacon, make your way towards it, going past ruined buildings and crossing the gap of large rocks along the way.

Just like with the first beacon, you will need to defend the second one after you have interacted with it, but this time there will be tougher enemies.

You will have more room to move around but the enemies may come from different angles and there will even be an Ogre that attacks.

Although the objectives showed that you needed to align only 2 beacons, there will be a third one that you will need to head over to.

Follow the lanterns that lead you down a path of destroyed floating rocks and you will soon come across a portal which is on a nearby platform.

Enter the portal and you will be brought to another beacon which will start a boss fight when you interact with it.

The Techeun will appear in the area once you align the beacon and you will have to fight her as well as enemies that they also spawn during the fight.

You will need to kill the Hoarfrost Executioners, which are the shiner enemies before you can damage the Corrupted Techeun.

To defeat the Corrupted Techeun, you will have to kill the Hoarfrost Executioners and damage her 3 times to fully finish the fight.

After defeating the Corrupted Techeun, head over to the waypoint where a portal is lingering and interact with it.

The Techeun will then be freed and with the beacons aligned, the mission will come to an end. 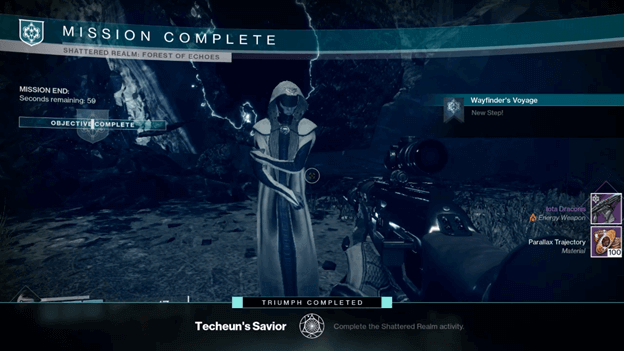 You have finally aligned the beacons in the Forest of Echoes, making the Ascendant Plane more stable and safer.

The Corrupted Techeun in the area has finally been freed and will be able to make it back safely, allowing you to progress.

During the ending of the mission, The Crow seems to question why they were not informed of this while Mara Sov speaks ill of the Witch Queen not intending to inform them.