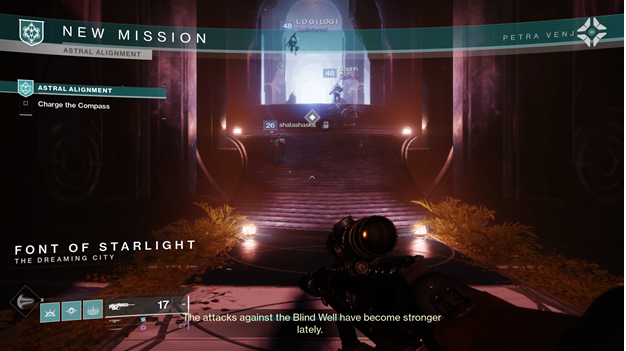 One of the main activities that you will be doing in Season of the Lost is the Astral Alignment, which plays an important part in setting you on a course and powering your Wayfinder’s Compass.

Participating in the Astral Alignment allows you to charge your Wayfinder’s Compass and reawaken ancient Ley Lines in the Dreaming City.

You will need to go through multiple steps during this activity and protect the Blind Well from Xivu Arath’s forces along the way.

The last part of the Astral Alignment every week will be different from one another; this will introduce a different boss and slightly different way to complete the mission. 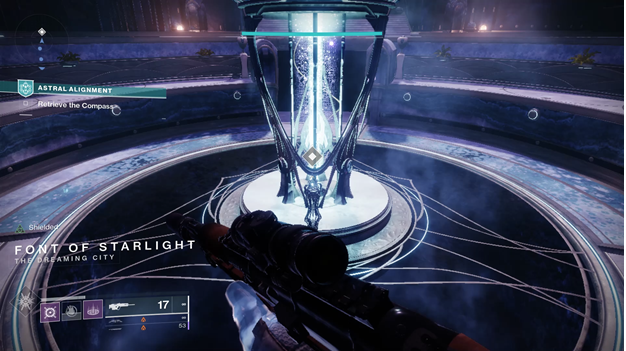 Similar to all other Astral Alignment Offensive missions, you will need to charge your Compass through various steps.

As you enter the Astral Alignment mission, your first task will be to get the Compass ready for charging, most of the time you will move to the next step.

Some missions require that you head over and place your Compass to begin the charging process, which causes enemies to spawn. 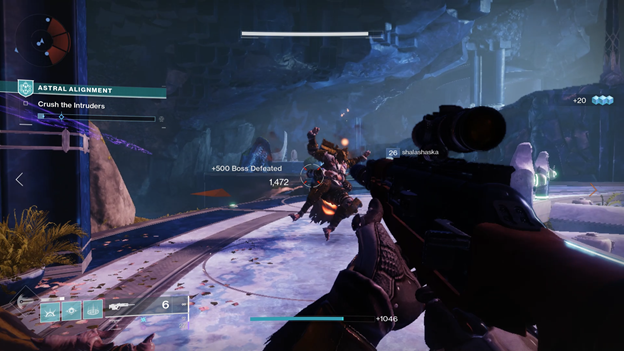 The first charging phase for the Compass involves defeating the enemies that spawn, thus you will need to kill enemies in the area until the bar is full.

You may see the bar in the objectives and there will be a marker to show how much charge is required to proceed to the next phase. 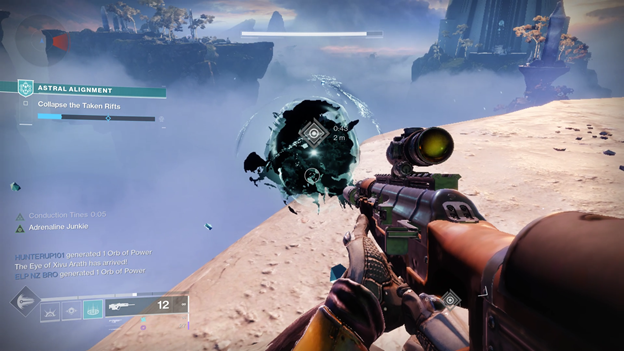 Once you have finished the first phase, you will be teleported to the next area where you will need to head over to the nearby beacon.

Interact with the beacon and the second phase will begin, causing enemies to spawn and requiring you to collapse the Taken rifts in the area.

The Taken Rifts are marked as well to help you find which ones are active, others that have been collapsed will no longer be marked.

The enemies that hold the Taken Essence are named Eye of Xivu Arath, which will drop the essence when they are defeated. 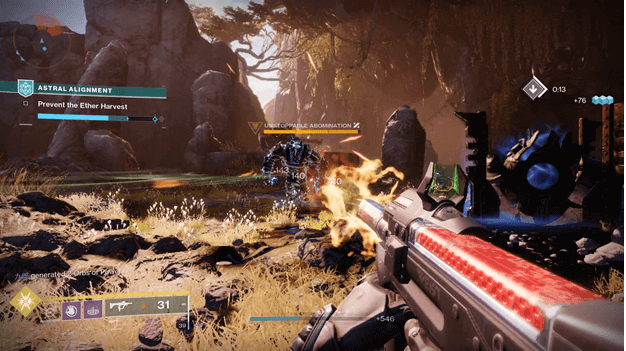 This mission sometimes does not appear in the Astral Alignment and is sometimes skipped, putting you in the Installing Batteries phase.

Once again, you will be teleported after completing the previous phase, bringing you to another area where you will continue the Compass charging process.

Head over to the next nearby beacon and activate it, you or your fireteam may set up a Rally Flag before proceeding with this phase if preferred for bonuses.

You and your fireteam will have to defend the marked targets to prevent the enemy combatants from stealing the ether.

Any ether that is drawn out will need to be fired at and destroyed and you will have to make sure to eliminate all of the enemies in the area until 3 Forgotten Abominations appear.

You will have to defeat the 3 Forgotten Abominations before the phase will be completed. 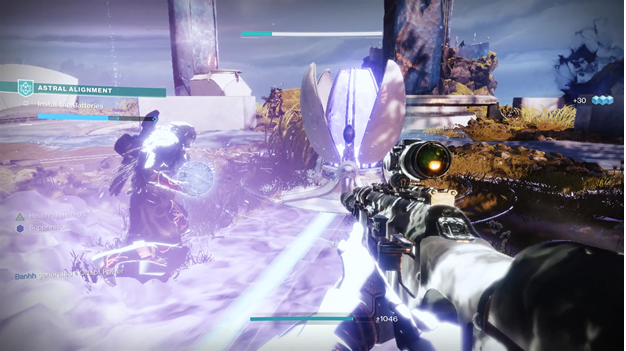 Similar to the previous steps, you must make your way towards the beacon to begin this phase, it will be easy to spot and once one of your team members activates it, the phase begins.

Group up with your team and one of you will activate it to begin the phase, prepare to head to the end where the batteries are located.

The third phase requires that you head over to where batteries have been stored and obtain them once their containers break.

Beware of the enemies in the area as there will be a lot attacking you and invulnerable Forgotten Abominations that cannot be damaged until enough batteries are installed.

You will need to pick up the batteries from the area where they were contained and bring them over to the starting point to install them.

Install spots are marked and one battery must be placed in each of them but be warned, you can only carry it for a short amount of time, requiring another player to pick it up after.

Teamwork is essential in this phase because it takes 2 players to successfully transport and install one battery.

Once you have finished charging the batteries, the Compass will be charged and you will then need to prepare yourself for the final phase, the boss fight.

Depending on which Astral Alignment you are doing, based on which week it is, there will be a certain boss that you will be facing.

Each of the bosses has a slightly different way of being defeated, mostly requiring you to deal damage, clear out other enemies and use certain pickups.

After defeating the boss, you will be able to collect loot from two chests, one is a normal chest while the other gives bonus rewards at the cost of Parallax Trajectory. 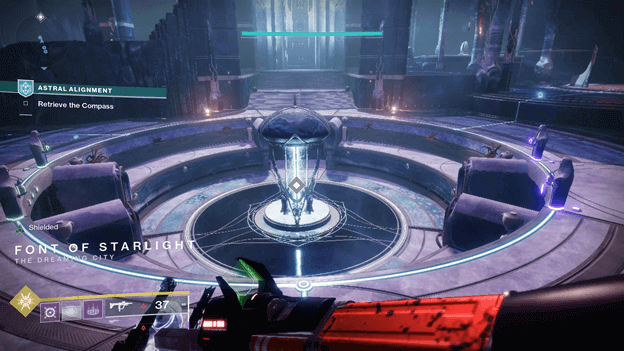 Kholks is a Taken boss who must be defeated with Taken Essence when he becomes invulnerable, this can be obtained by defeating enemies in the area.

Once an enemy has dropped the Taken Essence, you can pick it up and use it as a weapon, firing blasts that will remove Kholks’ shield, making it vulnerable.

The process of damaging Kholks, finding Taken Essence, and destroying his shield must be repeated until defeated.

Continue attacking Kohlks and clearing out enemies until you find the Taken Essence, then use it to destroy Kohlks.

Kruutiks is a tricky and annoying boss, capable of creating copies of himself to distract you while also sending enemies to attack.

When damaged, Kruutiks will summon copies of himself while other enemies come to attack you, making it important to defeat the enemies quickly.

Once you hit the original, keep damaging it until he restarts what he is doing but don’t let him stay safe for too long or Kruutiks will heal himself.

Pursue Kruutiks as fast as you can and try to follow and keep damaging the original until you defeat it.

In Week 3, players will be facing off against Kholks, Taken of Xivu Arath once more, nothing will be new, so you can refer to the previous information.

It is best to focus on taking out Kholks’ shield by getting the Taken Essence, which can be obtained by destroying Taken orbs inside the barriers to summon enemies that hold them. 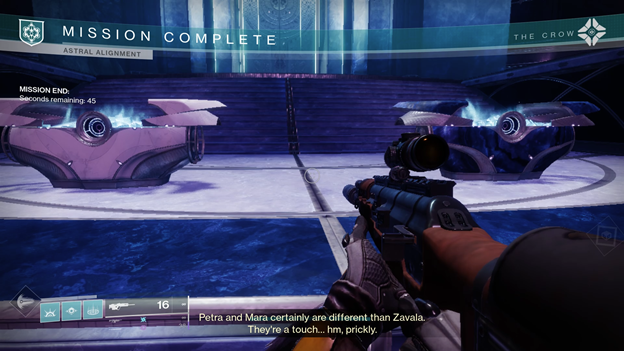 The Astral Alignment activities are important in Season of the Lost and will be required if you are not complete Seasonal Challenges and progress.

These missions are not that hard to accomplish since players can work together in groups, making things easier and allowing objectives to be handled in a better manner.

Remember to focus on teamwork and help your fireteam so that you can finish the mission faster and get the rewards faster.