Survival in the desert and other hot areas can be hard at the time, which is why it’s only good to have a Cactus Broth or a few with you when you are in such locations.

These consumables are easy to make as long as you have access to some Cactus Sap and last a good duration to keep you thriving in the heat.

Aside from giving you more survivability in the hotter areas on any map, Cactus Broth can also help you stay unnoticed by other creatures to some extent.

When you consume Cactus Broth, your water consumption decreases by 50% and you also gain resistance to heat.

Aside from the help against the hot weather and its effects on your character, consuming a Cactus Broth will make you less likely to be noticed by wildlife.

This is great for surviving in deserts or any place that is hot and good for beginning players to be safe from aggressive creatures.

The effects of Cactus Broth begin immediately after consumption and will last up to 600 seconds.

How to Make Cactus Broth (Recipe) 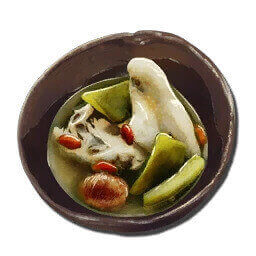 The Cactus Broth can be cooked in a Cooking Pot or an Industrial Cooker, which must have a supply of water and fire to cook.

Below are the Cactus Broth ingredients:

Cactus Broth mainly berries along with Cactus Sap, which can easily be farmed from Cacti that you can find in deserts mostly or the furry trees.

The Cactus Broth ID for spawning is: cheat gfi CactusBuffSoup 1 1 0

“This magical soup will greatly reduce your water consumption. The aroma of the cactus has a side effect of making the wildlife notice you less”

1) Fjordur: While Fjordur seems to lack a desert area, you can still make it on the map by collecting Cactus Sap from Volcano Island. Volcano Island can be found to the southeast of the region and you can find a lot of this resource by farming it in several locations.

2) Aberration: Sadly, you won’t be able to collect Cactus Sap on Aberration which means that you need to get it from another map if you want some there. You could head over to Scorched Earth or Ragnarok to obtain Cactus Sap and bring it back by using an Obelisk or Tek Transmitter.

While Cactus Broth is easy to make on maps that have deserts or other sources of Cactus Sap, making this consumable can be difficult on other maps.

The effects of Cactus Broth become beneficial in many ways, especially since it helps survive in hotter areas and prevents detection to some extent.

If you plan on building in a hot area and surviving there, having a bunch of Cactus Broth ready and stored will make things much easier.