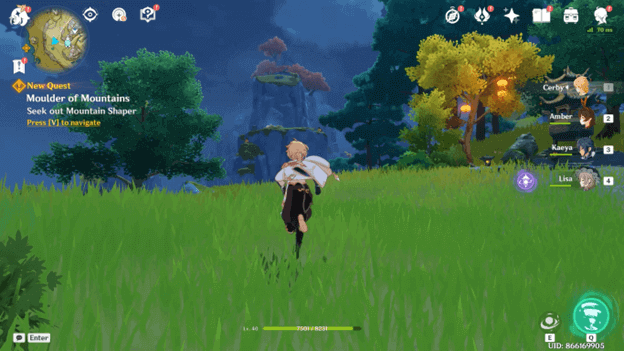 Following the instructions of the Moon Carver, you will have arrived at Mt. Hulao to seek out an Adepti known as Mountain Shaper.

Mountain Shaper should be around the mountains in the area, and you may notice that there are several entities trapped within the amber.

During this quest, you will meet yet another Adepti and find out its ways before passing on Moon Carver’s words.

How To Get Moulder of Mountains?

Moulder of Mountains is one of the quests that are obtained along with three others following the completion of Impromptu Change of Plan quest.

You will obtain Moulder of Mountains along with the Wangshu and Custodian of Clouds quests, which can be done in any order. 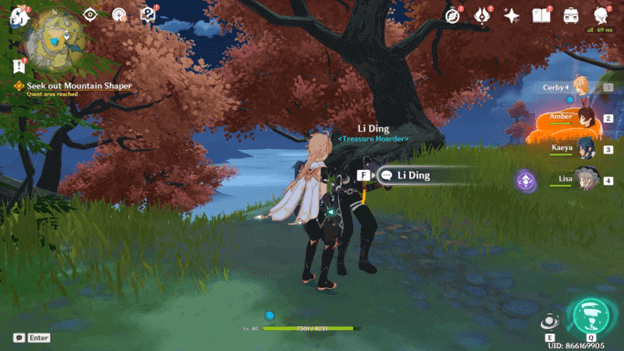 The quest area that you need to reach will be marked on your map and if you have a nearby Teleport Waypoint, you can use it to get there faster.

You will arrive at Stone Forest and see a man named Li Ding, who is a Treasure Hoarder that is praying to save his brother who has been trapped.

Speak to Li Ding to proceed with the quest and he will explain the situation you will then need to search for the trapped brother.

You will need to search for chunks of amber which have appeared and seem to have enclosed several things in them.

Search for the brother by shattering the amber in the area and you will be able to find the lost brother in one of the amber chunks in the area.

Using a character that wields a Claymore can speed things up as this does more damage to ores, which allows you to shatter the amber faster.

After shattering one of the amber chunks in the area, you will see a man named Li Dang in one of them and you will need to speak with him.

He will thank you for helping him and afterward run off to go find his brother, who you have explained has sent you to save him.

Head back to where you found Li Ding and you will see that he has been reunited with his brother, whom you must head over to.

Speak with the brothers and they will thank you for helping them, which will, later on, end up with Mountain Shaper appearing.

Mountain Shaper calls you over to receive your punishment and you will need to speak with him, which results in him speaking about your violations.

As you speak with Mountain Shaper, you will present him with the Sigil of Permission, allowing you to speak with him freely.

You will explain the situation to Mountain Shaper, who is surprised and angered by the fact that someone has slain Rex Lapis.

After the conversation with Mountain Shaper, who expects that you depart from the area quickly, the quest will be complete.

After you have completed Moulder of Mountains quest, you will receive Adventure EXP, and Mora as well as additional rewards. 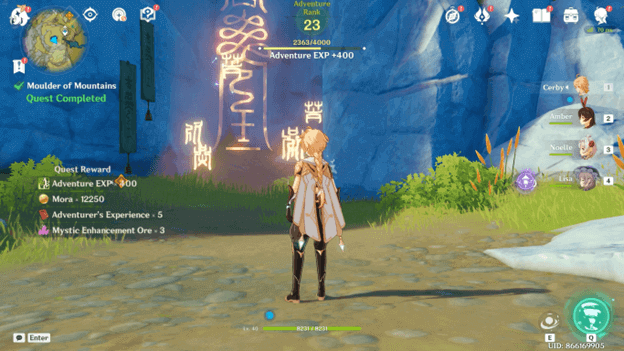 It appears that not only does the amber exist to trap those who trespass the area, but it is also living and watched over by Mountain Shaper.

The Adepti has a knack for punishing those who violate certain unspoken laws and mostly leaves those who are trapped in amber as punishment.

Luckily for the two brothers, you were able to help them escape, and it looks like they won’t be returning anytime soon.