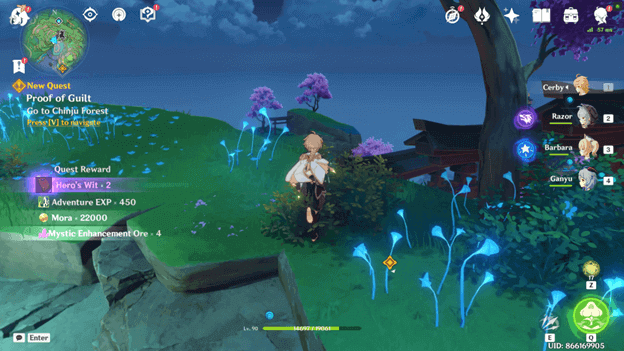 Once you have completed the Anti-Raiden Shogun Training in the previous quest, you will need to find a way of retrieving evidence to back up your claim.

During this quest, to get evidence from the Tenryou Commission, Yae Miko will get help from the secret unit under Kamisato Ayato.

Now, you will have to take an action and help Sayu to get the evidence from the Tenryou Commission and get some information about the Fatui.

How To Get Proof of Guilt Archon Quest?

The Proof of Guilt quest will begin right away after you have completed The Servant’s Path quest, where you undertook training to prepare to fight the Shogun Training. 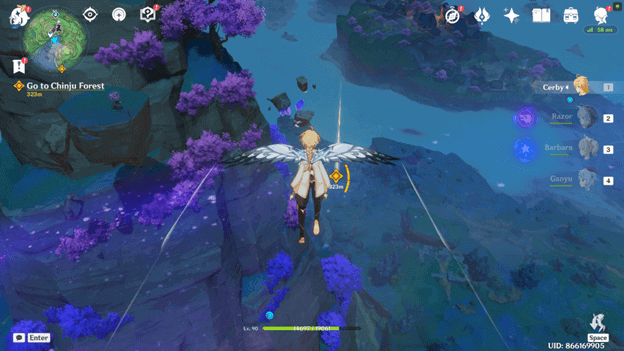 Your first step in this quest is to go over to Chinju Forest to find the professional ninja who told Yae Miko to you.

2) Find the Helper Who Yae Miko Spoke of

Once you reach Chinju Forest by gliding from the Grand Narukami Shrine and speak with Sayu who can be found sitting on a rock.

Once you have met Sayu and talked about the plan, travel to Komore Teahouse and talk to Thoma there to proceed.

Once you are inside the Komore Teahouse, speak with Thoma to discuss how you can acquire evidence from the Kujou Clan.

After planning to steal evidence, which requires that you acquire fireworks from Yoimiya and set it off near the Statue of the Omnipresent God.

Then you must distract everyone while Sayu goes in to find any evidence from them, with the plan made it’s now time to put it into practice.

Set the time between 00:00 – 5:00 which can be done from the menu and afterward the quest can be continued.

7) Go to the Designated Location Near the Tenryou Commission Headquarters

Use the Teleport Waypoint and go to Inazuma City and head toward the Statue of the Omnipresent God and see Sayu there.

8) Set off Fireworks to Distract the Guards

Follow the waypoint until you reach the platform in front of the Statue and set off the fireworks to set up a distraction.

9) Flee the Scene and Return to Komore Teahouse

Once the fireworks have been activated, you will now be given a 60-second timer to return to Komore Teahouse while avoiding the guards.

When you have entered the Komore Teahouse, talk to Kamisato Ayaka to initiate a cutscene, Sayu will give the evidence from the Tenryou Commission and the quest will end here.

After you have completed the Proof of Guilt quest, you will receive Adventure EXP, and Mora. 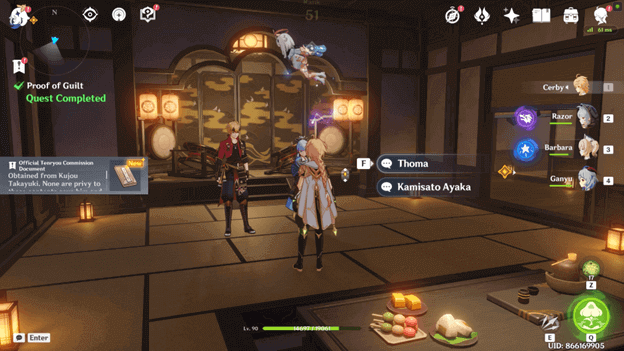 Finally, you got the evidence from the Tenryou Commission through an effective plan from Yae Miko and Kamisato Ayaka.

During this quest, Yoimiya’s fireworks blew up the guards surrounding the Tenryou Commission which allowed Sayu to enter it to infiltrate and take the evidence.

Now that you have obtained the evidence from the Tenryou Commission, you will now need to return to Yae Miko to hand it over and proceed with the plan.

How to Get Quelled Creeper in Genshin Impact