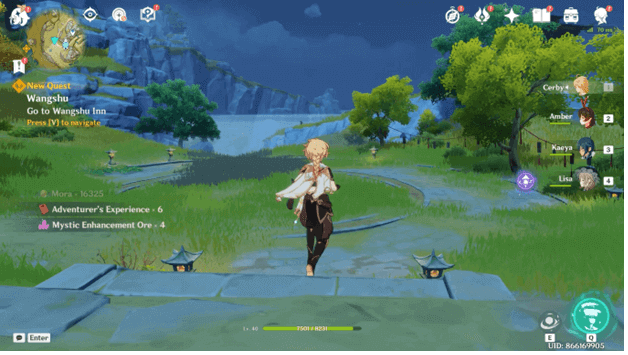 Although you are able to find the Adepti, he seems to be in a rather bad mood and does not wish to speak with you even with the Sigil of Permission.

Now you must find a way to get on the Conqueror of Demons’ good side to further clear your name with the Mililleth.

How To Get Wangshu?

The Wangshu quest is obtained after you have completed the An Impromptu Change of Plan quest along with two other quests. This quest is activated alongside the Moulder of Mountains and Custodian of Clouds quests as they involve finding the Adepti. 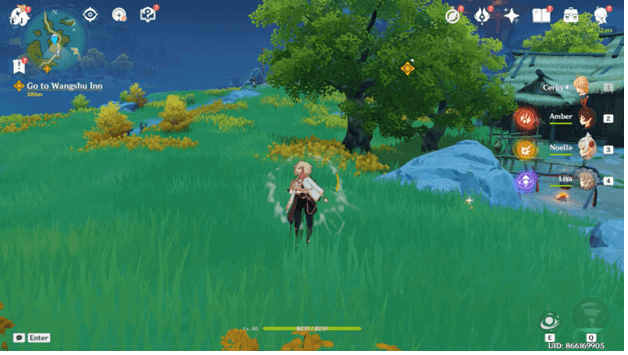 When you are doing this quest, you can either use the nearest Teleport Waypoint to get there faster or you can walk to the location.

Once you have arrived, head inside and go up the flight of stairs and a short cutscene will play where the Conqueror of Demons is nowhere in sight.

As you start to enjoy the view, the Conqueror of Demons who is later known as Xiao appears out of nowhere and talks to you.

Despite having the Sigil of Permission, he refuses to speak with you and sends you off, which requires you find another way to get to him.

2) Ask the Boss Lady about Xiao

Go back down the stairs and you will see Verr Goldet, the proprietor of the Inn and talk to her about the Adeptus.

The chef that you need to talk to will be outside just around the corner from where Verr Goldet is and he will be taking his break.

As you try to talk to the chef, he appears to be extremely rude and refuses at first but is later convinced since Verr Goldet demanded it.

Even if it was Verr Goldet who said he should cook the dish, he still hesitated because he is afraid to go to the kitchen because he thinks it’s haunted.

4) Go to the Kitchen

Go back and head down the stairs to find and check the kitchen and as you get in there, a scene will play where Paimon witnesses a ghost pass by.

The ghost that passes by appears to be just a child and simply waltzed by as if it had no intention of harming you or anyone.

5) Tell Smiley Yanxiao About What Happened

After the ghost makes an appearance, you will need to go back to the chef and speak with him, which is where you will explain what happened.

It appears that he won’t go back into the kitchen because of the news about the roaming ghost and Paimon will tell you to go back to the boss lady again.

Go back to the counter, and speak with Verr Goldet, she’ll tell you to make sure that the little ghost doesn’t go scaring anybody else.

After speaking with Verr Goldet about how to deal with the ghost, she will explain about a Witness Sigil, which is a calligraphy painting in the inn.

She tells you to look at the painting and afterward, look for a place outside where you can see the exact same image showing the Witness Sigil formation.

Go up the stairs, and the painting will be hanging on the wall underneath another set of stairs and interact with it.

Once you view the Witness Sigil, you will see symbols as well as a background which appears to have mountains. 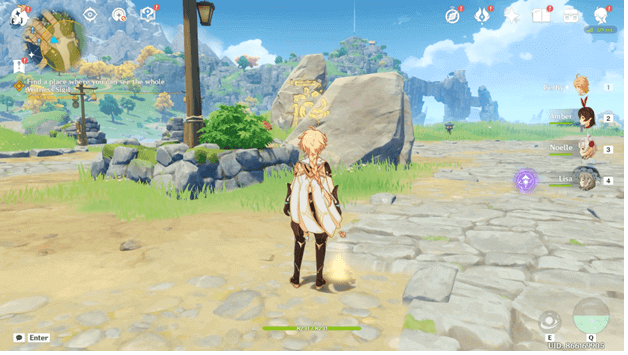 An area will be marked on your map where you must go in order to view the exact same image that you saw with the Witness Sigil.

Once you are at the area, all you need to do is line all the Sigils on the three rocks facing you so they join up with each other.

Rotate your camera until they match up and appear just as they did from the image where you were viewing the Witness Sigil.

Once you have aligned the symbols to match the ones in the Witness Sigil,, you will see the ghost runoff, who is revealed to be named Dusky Ming.

You will need to chase after the ghost by heading south and head towards the waypoint marking a location on your map. 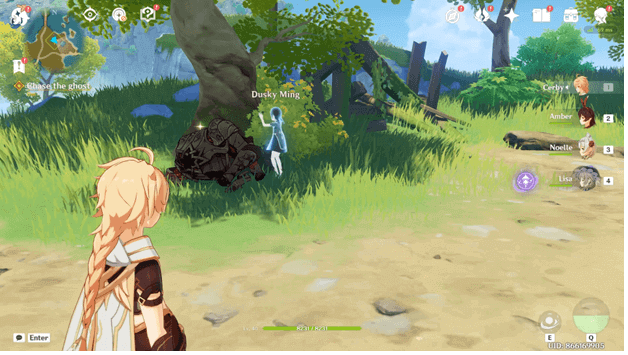 Dusky Ming will tamper with a broken-down Ruin Hunter, which will activate it and cause it to begin attacking you.

You will need to fight against the Ruin Hunter and once you have defeated it, a cutscene will play Dusky Ming will be singing and ignoring you.

Paimon begins to scold her and she will respond, agreeing not to not tease the travelers in the inn anymore.

Once you have dealt with the ghost, head back to the top of Wangshu Inn and talk to the chef to tell him what happened.

He will be impressed that you put a stop to the ghost and as a reward, he’ll now make you a bowl of Almond Tofu.

After you have received the Almond Tofu, you will need to head back to where you first found Xiao and will need to give it to him.

Approach Xiao, who will be at the area marked by a waypoint and interact with him to begin the conversation where you give him the Almond Tofu.

As he is eating the meal you gave him, you will explain the situation and he will be shocked to hear about Rex Lapis.

He will tell you that he’ll seek the other Adepti to get them to make a decision and you will also find out why the ghost is residing in Wangshu Inn.

After speaking with Xiao, the quest will now be complete.

After you have completed the Wangshu quest, you will receive Adventure EXP, and Mora as well as additional rewards.

You will also unlock the achievement “Silly-Billy Churlish Ghoul” 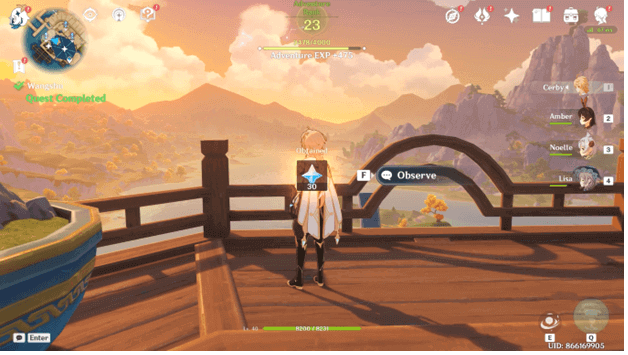 Upon arriving at the Wangshu Inn you started by searching for an Adepti, and during the whole ordeal you encountered a ghost named Dusky Ming.

Thanks to your actions, the issues within the Wangshu Inn with the hauntings have been resolved, which allowed the chef to help you out.

After speaking with Xiao when he is on good terms, he decided to help you out by speaking with the other Adepti and now your fate is in their hands.