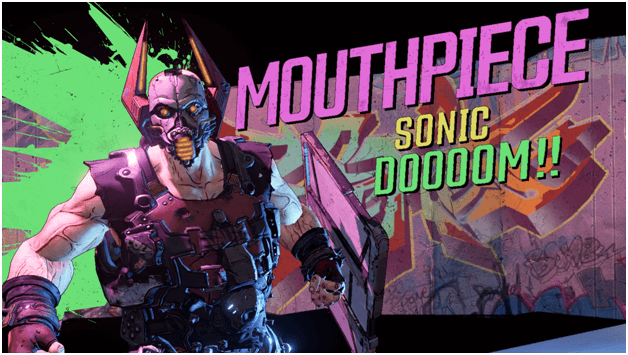 Mouthpiece is a boss that appears during the Cult Following Mission who appears as a masked big bodied enemy who focuses on using music or sonic attacks to damage the player.

He wears a mask and wields a shield which he uses to block attacks but still remains quite vulnerable as he doesn’t move that fast and his shield only blocks a small area mostly in front of him. 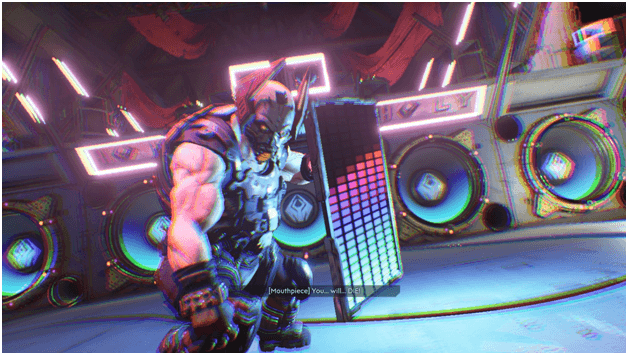 Mouthpiece first makes a small appearance during the Children Of The Vault mission through a message that was meant to received by Shiv who you will have already defeated before beginning the Cult Following mission.

He is found within The Holy Broadcast Center and is the main boss of the mission who will also drop the Vault Map which you need to pick up and bring back to Lilith. 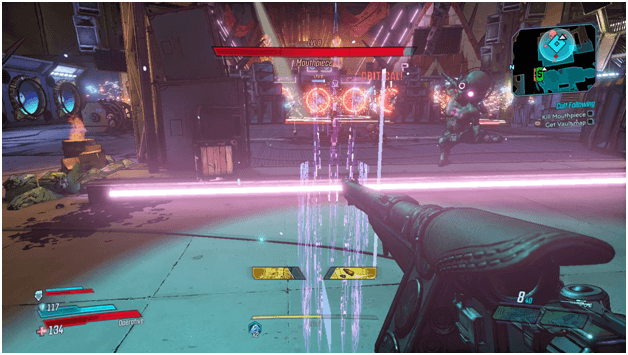 While fighting Mouthpiece, he will have groups of Apocolytes which are similar to Tinks but focus more on melee attacks, fighting alongside him which you should pay less attention to and rather focus on dealing damage to Mouthpiece instead. 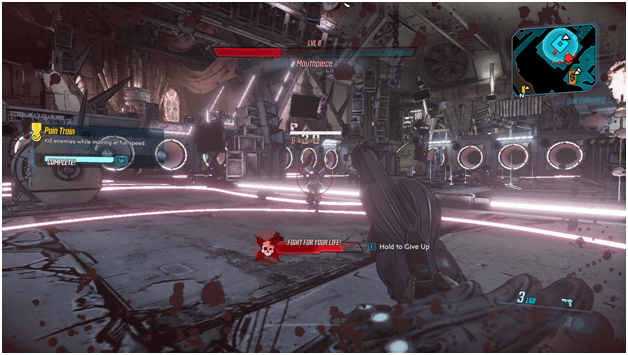 In the event that you get downed during the fight, you can easily kill one of the Apocolytes and use them to revive you during “Fight For Your Life”. 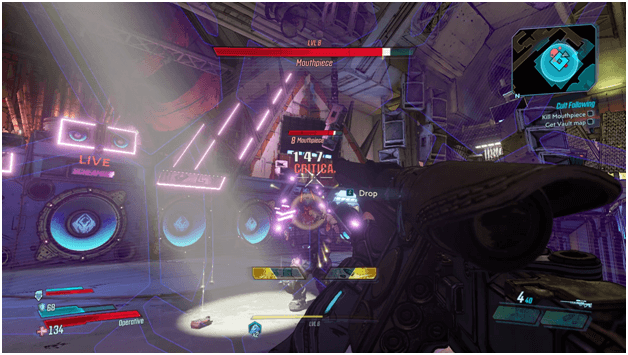 Mouthpiece will continue to fire at you from a distance or attempt to bash you at close range if you decide to move close to get a clearer shot.

His shield won’t be able to protect all of his body which give you good advantage and a chance to pick off shots on parts of his body, mainly his head. 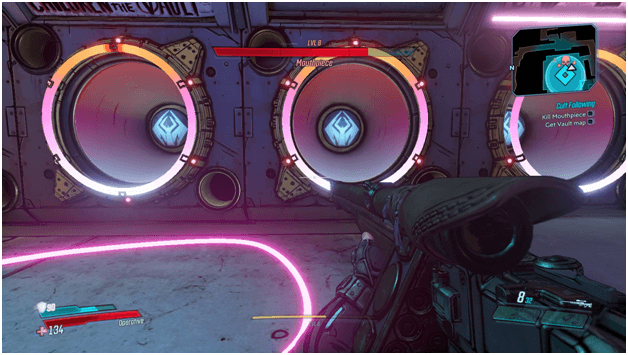 You may have noticed speakers along your way heading inside The Holy Broadcast Center which would cause a blast and knock you back, dealing damage.

Watch out for these since they can deal severe damage to you and put you in a position you wouldn’t want to be in, if not downed by the initial damage.

Look out for glowing cables and speakers as they will be a sign of which ones will go off and cause explosions. 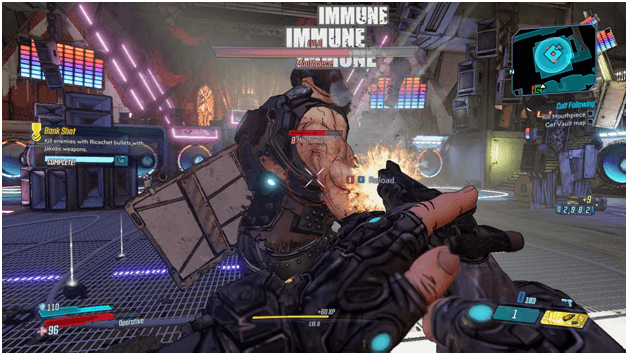 After a certain amount of time or dealing an amount of damage, Mouthpiece will be immune to damage so this is a good time for you to open up containers or loot dropped items to restore your ammo or health.

During this time, he will also attempt to cause his speakers to cause explosions which you should keep an eye out for since either the ones at the side of the fighting area may go off or even an area in the middle.

When a short amount of time goes by, he will be vulnerable again for you to damage and you can proceed in attacking him. 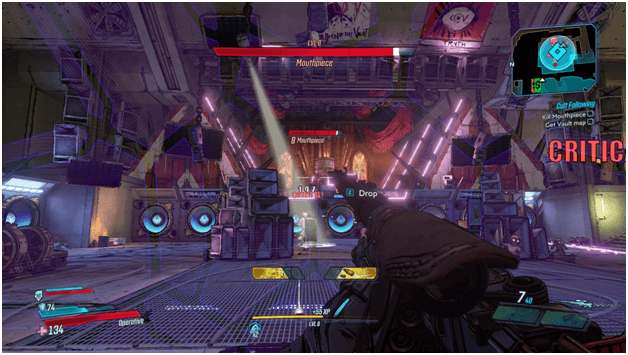 Shooting him in the head can also cause him to stagger and give you more shots while he is immobile. 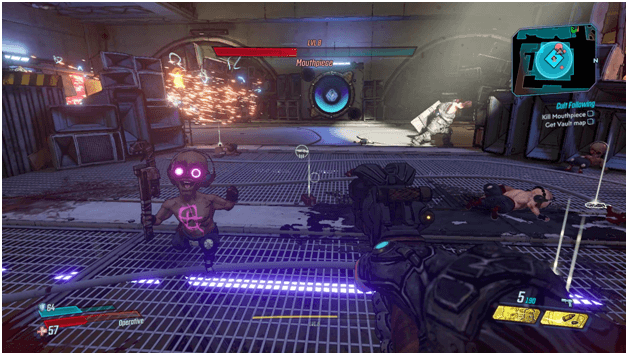 Aside from his normal attacks by shooting at you or hitting you at close range, Mouthpiece will occasionally use his speakers to deal large amounts of damage.

Moving out of an area that has glowing cables and speakers will allow you to avoid damage and during this sequence you may take some free hits at him. 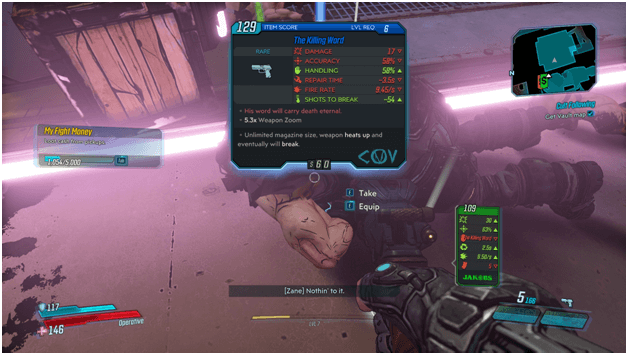 Aside from dropping the Vault Map device and a few other drops that may be worthy of looting, Mouthpiece will drop his signature weapon upon death known as “The Killing Word” which fires off the musical founds that you may have notice him shooting you with earlier. 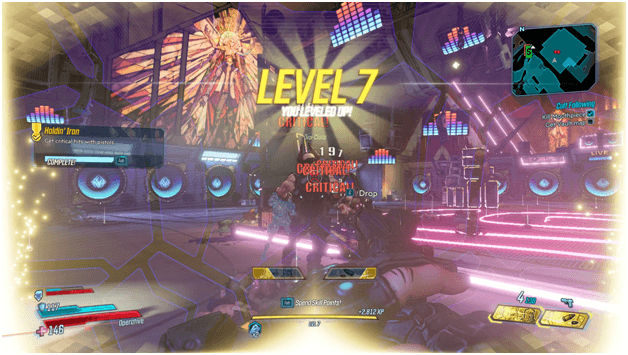