(Ropalolyst when encountered in mission) 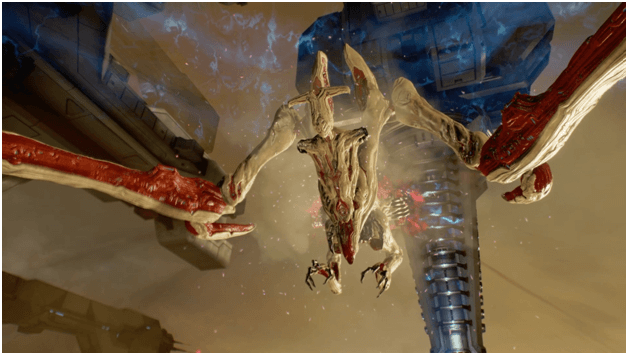 The Ropalolyst is a giant flying Sentient boss which is encountered in the Corpus Gas City.

It has many different attacks and deals a great amount of damage, making it hard to endure and kill if one is not well equipped and does not know how to kill the Ropalolyst.

(The Ropalolyst assassination mission on Jupiter) 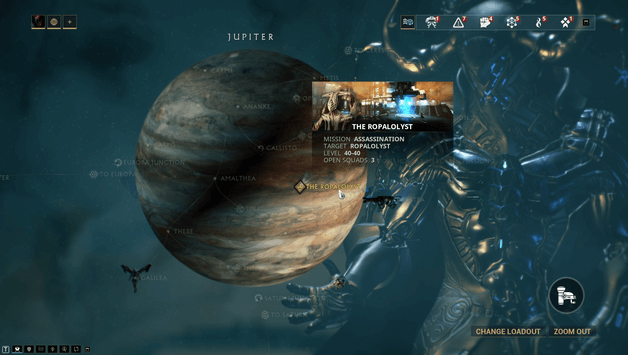 The Ropalolyst can be encountered on its own assassination mission on Jupiter. 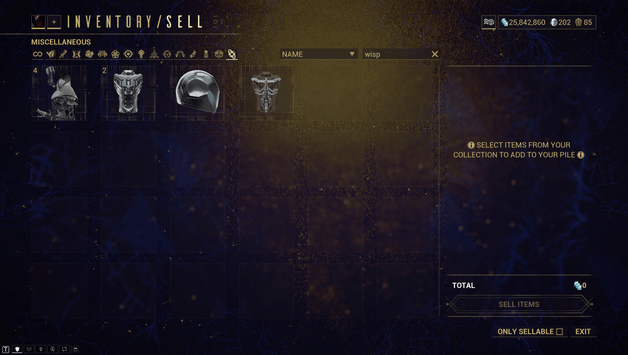 After dealing with the Ropalolyst, you will be awarded a blueprint for Wisp’s parts or the Warframe itself as well as an Amalgam Weapon Mod.

Defeating the Ropalolyst will allow players to receive one of the following blueprint rewards:

How to kill The Ropalolyst?

(Frost Prime fighting up against The Ropalolyst and other enemies) 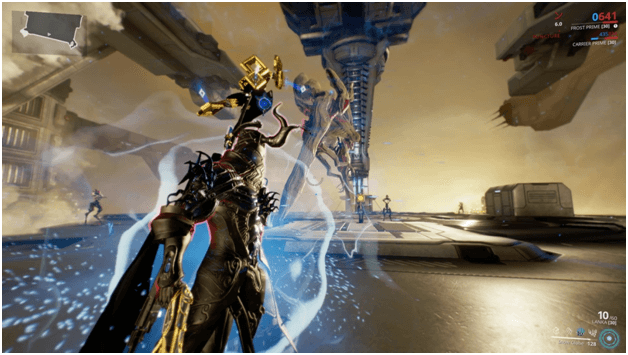 The Ropalolyst is capable of attacking with a large charged laser, smaller bursts of lasers, a radial screech that disables abilities including those of the operator as well, seeking projectiles, grabbing the player and much more. 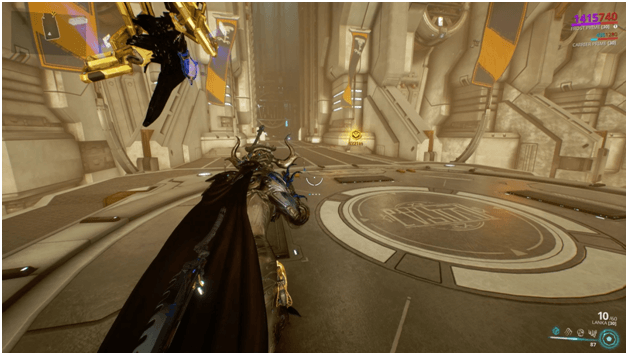 Once the mission begins you will need to head to the location marked on by the waypoint.

You will encounter enemies on the way, killing them is not necessary but the extra loot is not bad as you may have chances to get some useful resources. 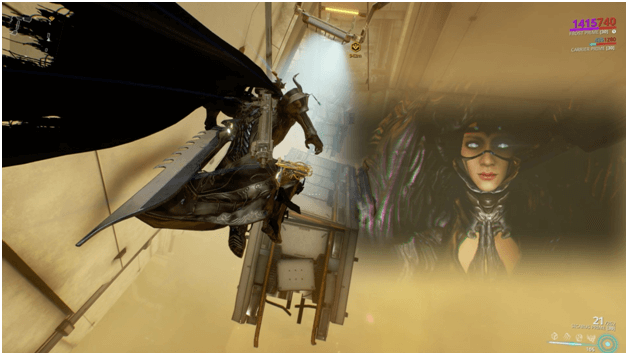 You will come across large gaps and will need some skill to get across properly.

Using an operator to use void dash can greatly help when moving to your destination allowing you to cross gaps or get to places that are hard to reach.

Take not that you can also go a long distance by doing a bullet jump, holding glide then doing a forward roll in midair. 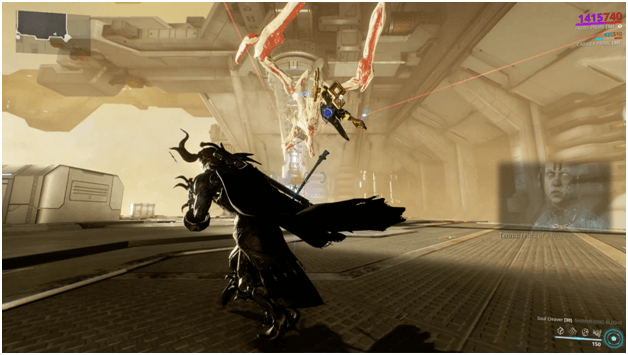 Once you arrive to the location a cutscene will begin where The Ropalolyst will arrive and then the fight will begin.

The Ropalolyst will begin attacking so be prepared to dodge or hide behind obstacles if you’re about to be hit as not all Warframes can withstand a multitude of its attacks. 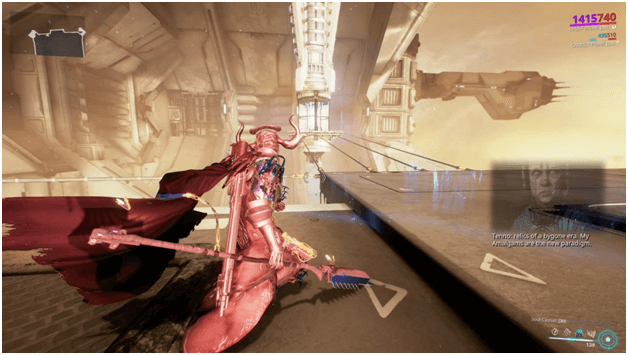 As soon as the fight begins, head straight for a capacitator tower by crossing the gap on the cables connected to them from the platform where you are starting.

Avoid any delays as The Ropalolyst may end up killing you if you stall too long. 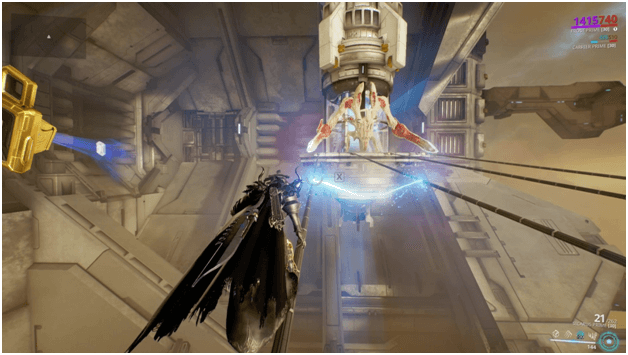 Once you get near a cable or mount one, The Ropalolyst will immediately move to the capacitator tower and try to electrocute you.

Jump to avoid this and remember to mount the cable again to avoided falling down.

We highly advise you to use your Warframe when crossing since The Ropalolyst can disable abilities such as void dash at any time. 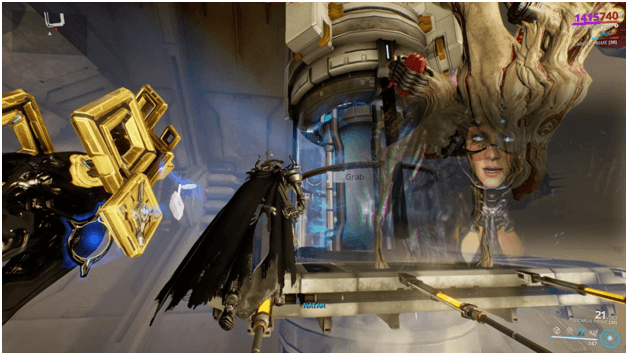 Upon reaching the capacitator tower, The Ropalolyst will fly away and prepare to attack you with a large charged laser beam which can push you or your operator back (even in void mode) or instantly kill you. 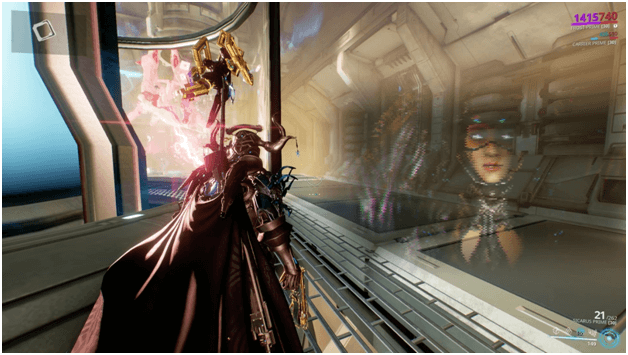 Hide behind the capacitator tower so the laser hits it, causing it to overcharge and have an excess amount of power. 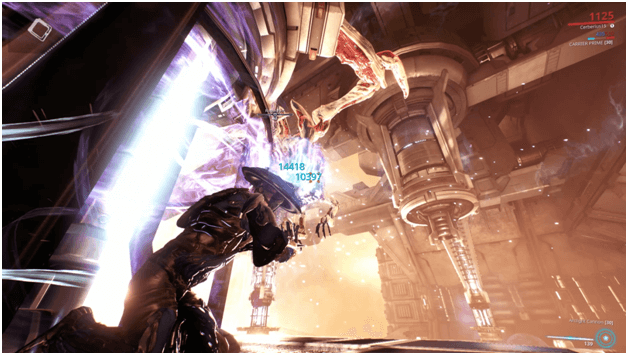 After being hit by the laser, the capacitator tower will become unstable and you will need to go into operator mode to take out The Ropalolyst’s shield. 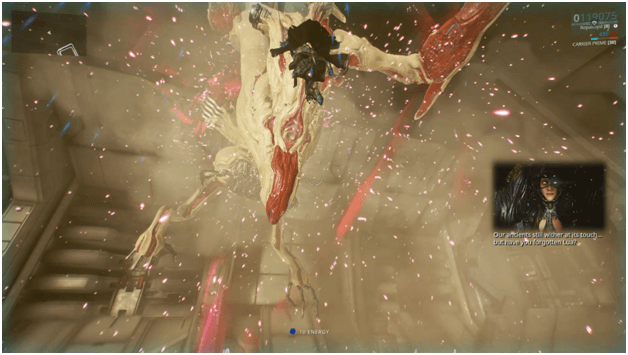 When The Ropalolyst’s shield is down, attempt to jump towards it and press whichever key/button you have assigned to interact with it.

This will make your Warframe mount the Ropalolyst which you will be able to take control of.

If there is a large gap between you and the Ropalolyst, you may do a bullet jump to close the distance.

Operator dash can be used to close the distance but once you get near the Ropalolyst it will most likely disable your abilities so you need to quickly interact with it or you will fall. 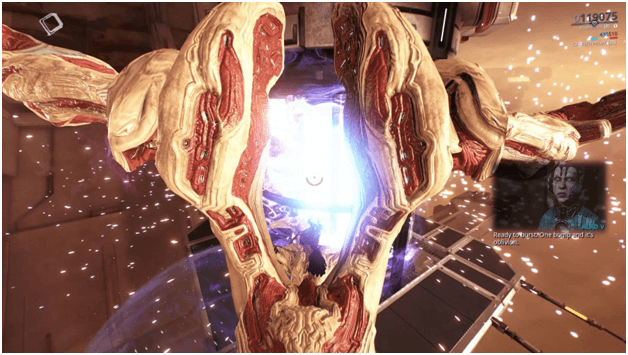 When you have mounted the Ropalolyst, steer it straight into the capacitator tower to proceed to the next step.

If you take too long to bring the Roplalolyst to the capacitator tower, you will be knocked off and will have to attempt to take its shield out and mount it again. 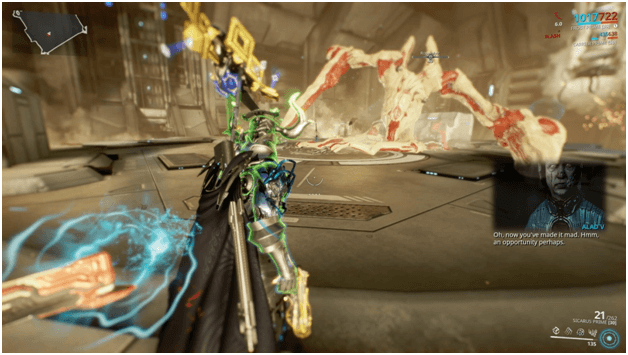 The Ropalolyst will be forced to the platform where you will begin combat with it as it will be on the ground fighting you instead of flying. 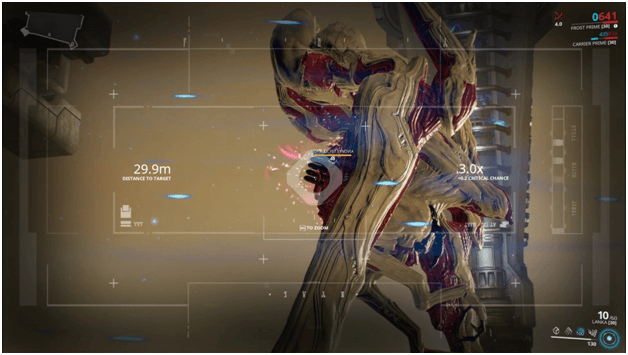 When you begin to fight it on the platform aim straight for its Synovia (weak spot) and fire at it until its health is depleted which will temporarily stun The Ropalolyst.

Avoid getting too close or it will grab you and you will most likely die. 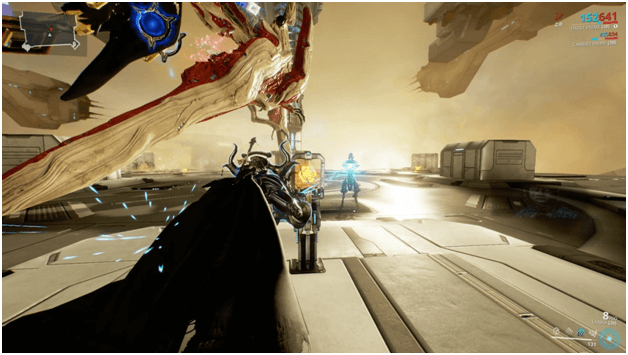 Once it is down, head for the console at the front of the platform and press it to activate the Terren Charger. 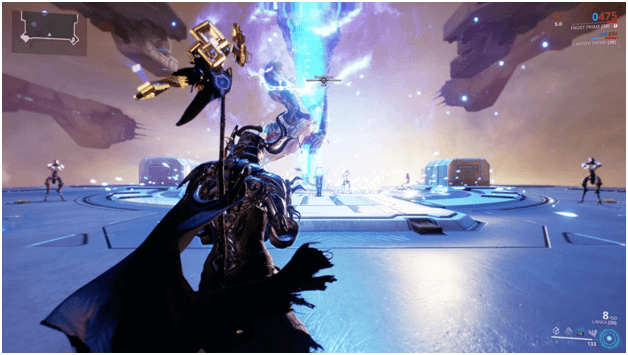 The Terren Charger will fire down on the Ropalolyst and after this happens you will need to repeat this step for each capacitator tower, however the third capacitator will cause the final stage of the fight to begin.

Beware of enemies on the platform as they will be attacking you so dealing with them or avoiding them is up to you. 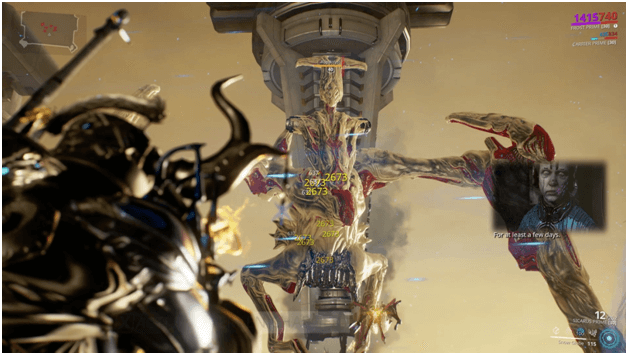 After the third capacitator tower is out from ramming The Ropalolyst, it will be completely vulnerable on all of its parts.

Begin to attack it until its health depletes and it becomes stunned once more. 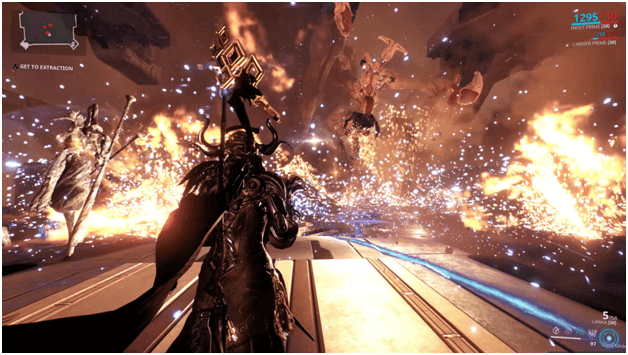 Once it has been weakened, activate the Terren Charger once more and this will finally kill The Ropalolyst. 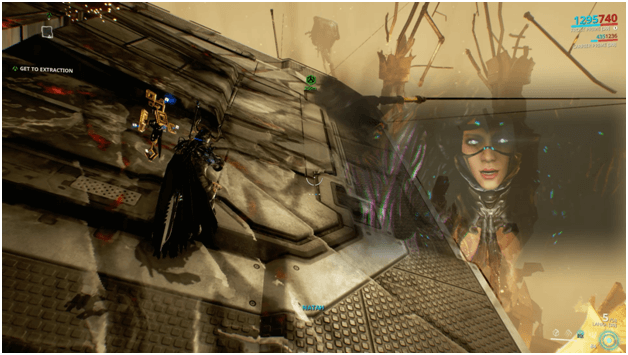 The screen will go white and you will end up on the now destroyed platform and from then on just head to the extraction point to finish the mission.

Cables will be there for you as well as other objects to jump on if you are unable to cross the large gap. 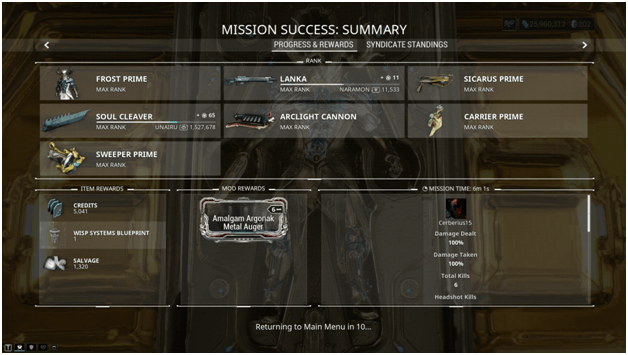 Upon extraction from the completed mission you will be rewarded with a random blueprint for either the Wisp Warframe or its parts. 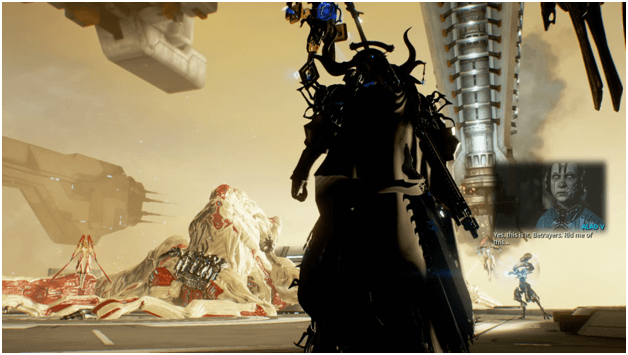 The Ropalolyst is easy to damage if you have Radiation as your element with the weapons you plan to use.

Bringing strong weapons that can you can use to hit its Synovia in the early stage will make the mission easier such a sniper rifles.

Our suggested Warframe is Frost/Frost Prime since his shield can freeze enemies that get near him such as the smaller Sentients as well as it can block the laser.

Other Warframes with protective abilities can be utilized as well if they have defensive abilities and this is completely up to the user’s preference if they would prefer to build a Warframe that can heal itself, endure damage or create barriers and such.

Some prefer to lure it to overcharge all the capacitator towers before ramming it which is also viable but when doing the mission solo, it is better to follow the steps mentioned to avoid death. 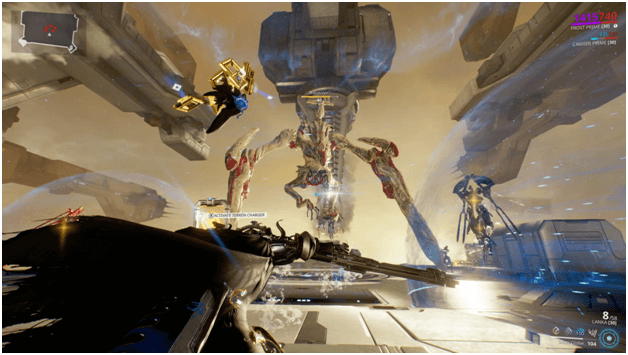 Knowing the right steps on how to kill The Ropalolyst will make it easier to finish the mission and kill the Ropalolyst without wasting too much time.

Depending on the player and their playstyle, after knowing the steps they can choose whichever Warframe they can use when it comes to how to kill The Ropalolyst.