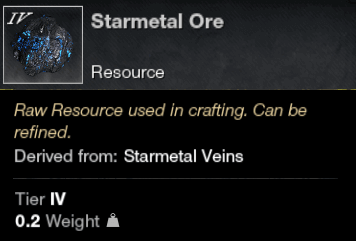 One of the rarer resources that you can obtain later on in the New World is Starmetal Ore, which needs to be processed if you plan on crafting Starmetal equipment.

Starmetal Ore appears as a metallic resource that has a bright blue glow about it, which is visible when you look at the Starmetal veins.

This Tier IV resource is required for some of the better gear that you will want to be crafting as you take on harder challenges in the game.

How To Farm Starmetal Ore?

Starmetal Ore can be farmed from Starmetal veins which have a bright blue glow, which is impossible to miss if you pass by one.

This resource needs to be farmed with a Pickaxe, and you will need to have a mining level of 100 before you can mine Starmetal veins.

Tracking Starmetal Ore is available once you have reached level 125 in mining, allowing you to easily find nearby veins.

Most of Aeternum has Starmetal veins hidden all over but these are not easily found by most players, but you can find a lot in Brightwood, Mourningdale, and the Restless Shore.

Starmetal ore is processed at a Smelter to forge Starmetal Ingots, which are mainly used to craft Starmetal items such as weapons, armor, and tools.

Aside from being used to create Starmetal Ingots, there are no other uses for Starmetal Ore.

Players often encounter Starmetal Ore when they explore Aeternum; these can often be found when they climb mountains and travel near cliffs.

The downside of Starmetal Ore is that you have to have a high mining level, which makes it almost impossible for new characters to mine it.

As you progress through the game and level up your mining ability, Starmetal Ore can be mined and later on tracked to be found easily.